Life is Strange: Before The Storm – Awake: The Review

Developers: Deck Nine
Publishers: Square Enix
Plot: Chloe Price is stranded in Arcadia when her best friend, Max Caulfield, leaves town, with a stepdad she doesn’t want and her teachers on her back. Then she meets Rachel Amber…

The online build-up to Life is Strange’s Before the Storm was one that I assumed would set the game company up for spectacular failure. Life is Strange was the indie hit of the year, an unexpected yet roaring success in the gaming community. The story charted a five part gaming series where the focus was less on action (even with a time travel mechanic at hand), and more on the slow-burning character drama surrounding the narrative. People loved it and with any good television series, as soon as it rocked to its emotional ending, there was a gap in the fans’ lives where Pricefield used to be. Thankfully the developers released a video online recently, announcing that there would be a sequel in the works, a Life is Strange 2. However, this good came with some understandable bad. Seeing as Life is Strange’s end was a definite ending, the sequel has no choice but to keep the beloved gaming style, but focus on brand new characters, meaning while we would get the game we loved, it would be without Max, Kate Marsh, Warren… all the characters we grew to love. Developers Dontnod sympathised with the gaming community, but were left no other options. Thus Before the Storm was born. Before the Storm is a three part prequel spin-off, a story set before Life is Strange, focusing on (let’s be honest), the best character of the series, Chloe Price. The prequel’s job is simple: a chance for the fans to say goodbye to the characters, knowing that this is their swansong. Of course, there were doubts. As Dontnod turned to Life is Strange 2, the clear main focus of their attentions, Before the Storm was outsourced to Deck Nine. The voice cast has been completely changed, due to voice actor strikes ongoing in the country. The story focuses on the relationship between Chloe Price and Rachel Amber (the missing girl and suspected romantic chemistry growing between the two), a story which while interesting is something we already know the tragic resolution of. Can the prequel stand on its own two feet without the supernatural mystery at the heart of the story? And Chloe is a character devoid of any superpower. While Life is Strange is certainly about the character development as well as the action, surely without the power to reverse time, we will be playing a hollow shell of the game. While fans were happy to swallow any promo image or rumour about the upcoming Before the Storm, my thoughts were that it would be a half thought-out creation, something to keep the Life is Strange community at bay while they focused on the much more important Season Two. Therefore, as I picked up the controller to begin the first episode of Before the Storm, Awake, my expectations were low. 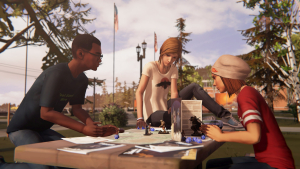 Awake proceeded to be a mix between exactly what I imagined it to be, and exactly what the Life is Strange community hyped it up to be. The story holds few surprises in terms of the main plot. Chloe is reeling from the fact that Max has abandoned her for new pastures. Assuming that any form of friendship will end in misery, Chloe adopts a lone wolf persona, the girl everyone at Blackwell Academy knows of, but cannot put a name on. However, without friends, Chloe is struggling to healthily express her emotions when grieving over her dead father, especially when her mother introduces a new man into the household, the patriarchal David Madsen. This turns her into an explosive persona of teenage rebellion and sarcastic cruelty. Then she meets Rachel Amber, the coolest girl at school that somehow finds a strange fascination with her unruly attitude. While the final few scenes introduce a few unexpected events that clearly will be fuelling the narrative of the other two episodes, there aren’t really too many surprises. Yet the story still grips, in true prequel fashion. There is this sense that this is the equivalent of one of the weaker episodes of Life is Strange, where little happens to power along the story, yet playing Chloe Price is far more satisfying than Max. Max’s personality was the beta female of the game, her personality meek and mild, so the larger supporting cast had more screen-time. It was a story about a shy girl going on to do great things, which while gave Life is Strange an overall arc, hurt the smaller scenes. With Chloe, you relish the smaller moments. A school bully turns on you and rather than awkwardly stuttering your apologies, Chloe comes back with an even better insult. Some of Chloe’s razor sharp dialogue in Awake is amazingly written, bound to cause a gasp of “you can’t say that!” There is a new feature in the game, where you can take on characters in dialogue battles. You use their insult against them by picking up on key words and using them to form the perfectly quipped comeback. It is satisfying taking on a club bouncer twice your size and making him back down. The voice actress is incredible, especially considering Rhianna DeVries is meant to be just in charge of writing the part. While jarring at first, when the snarky comments and, later, the emotional outburst kick in, DeVries becomes an excellent replacement for the beloved Ashley Birch (who while not voicing the part, does help DeVries create the character’s dialogue). Outside of simply being the character, Chloe seems to carve up her environment more often. Instead of photographing hidden items, Chloe grafittis on various objects, a process that you have a part of devising with her. She can also change her outfit, a piece of gameplay that hasn’t quite been fully realised yet, but definitely makes Chloe feel more in charge of the setting than Max did. Max got to take part in the environment; with Chloe, the environment gets to hang out with her. Chloe is easily an improvement on Max, who even when becoming the antagonist in her own story, is strangely endearing, a teenager trapped in her own circle of destruction.

It is good to see how well Deck Nine have translated the Dontnod style into Before the Storm. As with many copycat creations, there is a danger that the style of the game won’t quite mesh. Arkham Origins is the other example that springs to mind, a game that felt like the Rocksteady original series but lacked the intelligent spark. Before the Storm thankfully takes risks, yet feels familiar. It is a satisfying return to Arcadia Bay. There is a rewarding blend of old and new here. The echoes of Life is Strange are clear with a much more agreeable Frank steering the opening part of the story, while the Arcadia Bay setting features cameos from all of our favourite Life is Strange seniors in freshmen format. Victoria Chase appears as the prissy newcomer, climbing the social ladder through pure pettiness. She might not have the elitist attitude of the older Victoria, but feels like the character would do at that time, keeping enough of the Victoria “charm” (what’s the opposite of charm?), that we are faced with a character we love to hate. Nathan Prescott, head bully of the main series, is very interesting here, a character who will surely be fascinating to watch grow in the next few seasons. As well as the main characters, we can catch glimpses of the lesser parts hanging around campus, the sort of characters that we assumed would be forgotten in this spin-off. But this is not simply fan service, with brand new characters coming into play. Some might argue they are even more developed here than the old faces, as is important, if not what the public might want. You have the option of playing Dungeons and Dragons with Steph and Mikey, the school nerds. The current campus security guard, who has his own awesome mix-tape, acts hard in front of Chloe, but is clearly self-conscious about his work. Then there is Rachel Amber. Technically we have never met her before, the absence of her character doing all the talking for her. But here, she is a whirlwind of personality (sorry – poor choice of words), making it easy to see Chloe’s attraction to this popular yet down-to-earth person. The friendship could be stronger than the one between Max and Chloe, seeing as both characters actively bounce off of each other. Rachel Amber might be just as flawed as Chloe, in some regards, a story beat hinting that Chloe is just a phase for her, rather than the solid relationship Chloe believes it is. It’s not just the characters, but the world itself. The journal is back and Chloe’s writing is far more interesting than Max’s, as you learn exactly what she thinks about everyone. You can flick through her text messages to see the sad one way conversations between her and Max Caulfield. Wherever you turn, the story bleeds through beautifully, a game that is teeming with detail when you peel back the surface. Once again, Life is Strange wins fans over with its breath-takingly detailed scenery. Definitely not a failure then.

Final Verdict: At this rate, Before the Storm might turn out better than Life is Strange. That would be awkward, unexpected and… well, very Chloe Price.