Family sitcoms usually have a finite group of actors who approach them. Because of the comforting predictability of the sub-genre, producers tend to fish from a very small pond in terms of leading actors to choose. Jason Bateman, Charlie Sheen, Will Smith… all of these actors have massive sitcoms to their name, because they excel in that field. There is very rarely a lack of surprise when you hear about the upcoming casting news for a brand new family sitcom. However, Netflix has never been one for doing the obvious thing. Therefore, we get a sitcom that casts two massive actors at the helm, putting them in roles you have never seen them in before. While Drew Barrymore (ageing so gracefully women are starting to actually look forward to the process), falls back onto the kind of charisma she was allowed to portray in her early career, Olyphant hasn’t quite done this role so openly before, making him a joy to watch. That alone is worth sticking Santa Clarita Diet on for. 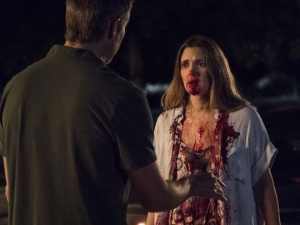 Mind you, the edgy casting of Timothy Olyphant and Drew Barrymore is hardly Santa Clarita Diet’s only USP. While this series is definitely a situational comedy in the strictest sense, it is hard to see Charlie Sheen in Two and a Half Men getting himself into these particular situations. After an ambiguous start (hopefully to be properly explained in a later season), Drew Barrymore begins vomiting uncontrollably, ejecting a mysterious organ and awakes as a cannibalistic member of the undead. So far, so Netflix. However, the key thing about Santa Clarita Diet is as soon as Barrymore has embraced the fact she is a watered down version of a zombie (she can talk and rather than an incessant need to feast on brains, she gets impulsive cravings), the show returns to its situational comedy roots. Their daughter is rebelling at school, Barrymore gives her suburban friends bad life advice and there is a fledging love interest between their teenage daughter and the nerdy boy from next door. We are definitely in family sitcom territory only with the backdrop that the mother figure has a higher libido, a hankering for human flesh and the pesky habit of decomposing throughout the course of the show. Essentially Netflix have come up with a formula for people that love these kind of shows and people who think that these kind of shows would be good if they had a little more excitement. It might be argued to slightly fall short of both expectations, but with each episode at a brisk 30 minutes and Netflix’s writing designed for a binge session, it hardly feels too painful to tune in. Santa Clarita Diet certainly grabs your attention. The easy-going nature of the series has probably saved it from the infamous Netflix axing of less popular shows, because there are quite a few large problems with Santa Clarita Diet that could have been reason enough to scrap the show along with the likes of Sense8 and Girlboss. For one, there are two warring tones of the show and each one seems to be fighting for control of each episode. On one hand, a lot of the jokes come from the normality of everything, despite the fact one of the family has just turned into a horror movie monster. Timothy Olyphant, in particular, shines at being able to complain about a microwave oven and his wife’s condition in the same breath. A scene where the pair of them discuss how to kill Barrymore if she has a turn for the worst is the perfect comedic material. It is a shame that the show also tries its hand at gross-out humour. We have farting dead bodies, projectile vomit and jokes about seizures. These gags feel shoe-horned into the script as a back-up in case no one is liking the show so far. In reality, they kill the mood to drag the show down into the depths of lesser comedy.

But its overall message saves it. Santa Clarita Diet, behind the jokes, is a story about the strength of a family. We have had movies about family members turning into the undead since the early origins of Gothic literature. Most of the time, it ends with a merciful bullet to the skull. This series is about Timothy Olyphant’s character putting his foot down and refusing to deny that there might be a cure. His commitment to both trying to find an answer that might not exist and also to being there for his wife, while she goes through these scary changes. While Barrymore and Olyphant go out on killing trips, it is about more than amusing scenarios where the couple fail miserably at adopting a serial killer lifestyle, but about the lengths they will go to for love. There are some true tender moments to Santa Clarita Diet that make the show, while middling, easy to root for. By the time, Season One rolls to a close, you care enough about the characters and narrative to pray that Netflix keep this series going for just a little while longer.

Final Verdict: The comedy is up and down, but the Netflix version of a family sitcom is unique enough to attract your interest.