Seven Psychopaths’ main goal is to be as unconventional a film as possible. Whenever you think it is about to start following some vague form of plot, it does a total 180 degree turn and goes back on itself. A crime chase movie ends up evolving into a three-pronged character drama in the middle of the desert and just when the movie taunts the idea of a final shoot-out, it once again goes for an ending that isn’t what you expect. For some, this might be the factor that makes Seven Psychopaths a muddled mess, flirting with audience expectation yet never quite satisfying. However, for those able to get onto this movie’s wavelength, you will find a very rich comedy, moving along the lines of McDonagh’s last feature, In Bruges, but taking up to a notch that involves masked assassins, serial killer killers and dog-loving gangsters. 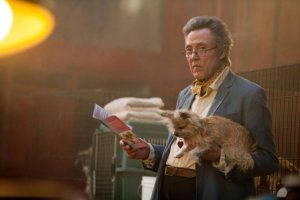 The one thing Seven Psychopaths can guarantee is pitch perfect performances from its four central stars (although the supporting cast are hardly letting the side down, even if they are usually horrendously side-lined: poor Olga Kurylenko). Colin Farrell has always been at his best when put into smaller, independent movies, always feeling more at home than when he is hamming it up as a superhero baddie. Cheap gags about his Irish rampant alcoholism aside, Farrell’s job is the straight man here, a fading screenwriter who is moments from a deadline and desperate for inspiration. As the craziness of the story kicks off, Farrell’s job is to react with a bemused manner (his eyebrows are on fine form). One of the potentially frustrating things about Seven Psychopaths is that while the story about Rockwell fleeing from Harrelson is the stuff movies are made of, one of the running jokes is that the movie is more concerned about Farrell’s quest to finish his screenplay. While Farrell acts as the foil for the other characters, it is Rockwell who steps up to the show-stealing best friend role. Rockwell’s character is a petty dog-napper with a few secrets up his sleeve, but for the purposes of this review, all you need to know is that he excels as the joker best mate material. One scene which sees him monologue out his idea for the finale of Farrell’s screenplay is the joke’s best gag, a sequence which ends up blowing half the movie’s budget on the ‘dream sequence’ that the movie later pans. It isn’t just the visual treat waiting for the viewer, but Rockwell’s narration as the scene plays out, exuberant and side-splitting funny to the very end. Meanwhile, there is solid support from Harrelson and Walken. Harrelson plays the demented gangster, chasing after the lead heroes, all because of a missing dog. It is the kind of comedy role that probably slides under the radar, when hidden behind so many good turns from the other actors. If anything Harrelson makes his performance too easy, comfortable in the role of villain. However, do not be fooled, because it is very tricky to blend comical self-depreciation and pure threatening malice as swiftly as Harrelson does. One minute, he is being narrow-minded and incompetent, missing jaw-dropping clues right in front of his face, and a heartbeat later, he is suddenly a terrifying presence, his dangerous flickering eyes proving he is always a few steps away from killing an important character. However, these three performances are blown away by the star of the show, Christopher Walken. Walken hasn’t been this good in years, in a role that lovingly blends the oddball character pieces he excelled at in his youth and his love of comedy he adopted, perhaps a little too openly, in his later career. The end result is a bafflingly bizarre role that easily makes it into the Best of Walken.

Final Verdict: Seven Psychopaths might be a messy movie, but the charismatic comedy and strong performances make it a strong watch regardless.