In this thrilling re-imagining of Shakespeare’s Othello, the Restless Theatre Company pull the timeless tale from the Elizabethan era and place the characters in the middle of a 21st century company. While purists might frown at the radical decision, it turns out to be an inspired move from the director. The office setting encapsulates the petty back-stabbing and power plays of the Shakespearean tale. It kicks off with Othello promoting the charming Michael Cassio to the position of Deputy, frustrating Iago, well known in the office as being directly honest, a reputation that only the audience and his poor wife, Emilia, knows to be utterly false. Iago sets off on a slow-burning scheme to ruin both Othello and Cassio, using every tool to his advantage in the office, including Othello’s openly lesbian relationship with Desdemona and the help of clueless but also frustrated ex-husband to Desdemona, Rodrigo. 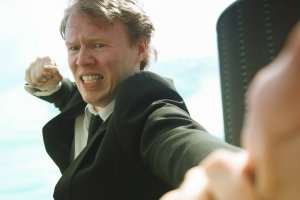 As a result, The Restless Theatre’s Othello ends up focusing on its villain over its hero. Richard Knox makes fine use of this, captivating the audience right from the off and easily stealing the show. His smooth Irish accent turns the tricky Shakespeare dialogue into a pleasant musical tone, making sure the audience’s attention never wanders. It is a wonderful performance, playful yet malicious. For a long time, he is hard not to root for and the audience has fun, guessing where his vengeance will stop. An early scene where he and Rodrigo get Michael Cassio drunk, turning him into a bumbling fool on the cusp of an important contract is delightfully fun. Moments that should be emotionally destructive are brightened up by a care-free gesture from Knox. You cannot help but appreciate how Iago has everyone in the office fooled, puppets at his command. In fact, it is only when he is away from the stage and the other characters are left wallowing in the misery of the destruction he has left, do you realise how monstrous the character is. As Othello struggles to cling onto her relationship, so strong at the start of the theatre, you are left horrified at how manipulative Iago is. The other performances are also brilliant. Sarah McCourt’s Othello starts slow, almost overshadowed by the other characters, especially the central Iago, but grows steam remarkably fast, when the meatier parts of Othello’s character arc comes into play. By the end, it is a gripping performance to watch. Tom Menary and Louis John Brzozka provide the lighter touch, bringing much needed levity to the show, but given enough space to tackle some strong dramatic moments when the time is right. Becky Louise plays Emilia just right, suggesting there is far more depth to the character than the play is giving away. Finally we have Samantha Theobald-Roe’s Desdemona, who plays the wife caught in a trap she has no idea is being sprung. It is a powerful performance, Theobald-Roe strong until the very end. It is her downfall that acts as the final straw that makes the audience turn on Knox’s Iago.

There is almost too much to watch. It is pretty much impossible to take it all in. The real power lies in the background details. While Knox or Othello holds the audience’s attention with a monologue, in the background, the other actors are solidifying their character arcs. A lingering look between Cassio and Emilia occurs but is never referenced again. As Othello and Desdemona share a kiss in the office, every other actor’s views on bisexuality and homosexuality is transparent from their reactions. The whispering the audience is not privy to between certain characters adds the feel of a bustling office, where every layer holds a new story to uncover. Possession of the digestive biscuits acts as a small metaphor for the power struggles going on in front of our very eyes. It is a terrific display of direction, making the use of every inch of the stage and play to tell this gripping story. While the play discusses homosexuality, the adaptation attracting attention by changing the gender of Othello, it is strange how little it changes the pace of the play. By the end of the play, you see them as a couple in love, rather than gay lovers. Perhaps simply that does far more for homosexuality than outright dissecting it. The play is endlessly clever, accumulating into an awesome finale. While the death of certain characters feels slightly adrift in the office setting, escalating far quicker than the modernisation implies, this is Shakespeare after all. Someone needs to get a knife to the heart. The cast all come into their own, Richard Knox stepping down and letting the supporting cast do their thing. Becky Louise, in particular, comes into her own, blowing the audience away with a raw, heart-breaking performance. However, every one of the cast hits the mark. It is a shocking pay-off to a gripping build-up. Bravo.