How I Met Your Mother – Season One: The Review

How I Met Your Mother has grown into one of the most beloved sitcoms in American history. Taking the philosophy of the great Friends, How I Met Your Mother plays it simple. We, as audiences, like to see a group of friends manoeuvre their way around day-to-day life, handling the challenges that are thrown up in the dating world, work and friendships. Its success comes down to fact that it is always drawing lines between its characters and us. A lot of the trials and tribulations the characters go through in Season One can be related to our own lives, something that Friends began to forget in later seasons (to be fair, How I Met Your Mother will also do this, as we reach the end of its run). The characters are instantly loveable, the humour is always light and easy to follow and we are wrapped up in their crazy lives in a matter of moments. 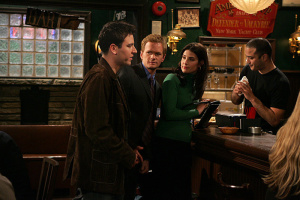 A lot of this is down to a very good lead. Josh Radnor is a smart blend between awkward when it comes to dating and actually quite smooth. We have all seen that lead in a romantic comedy who is impossibly awkward around women and cannot talk to one to save his life. It is a tired stereotype and beyond a bit of Hugh Grant stammering, doesn’t really hold much originality anymore. Thankfully Ted Moseby is not that person. In fact, awkwardness around women, at least in the traditional sense, is never really his problem. The first episode confirms him as someone who can actually talk to women and gets on with them quite well. His sarcastic and quirky sense of humour is addictive and Ted is never someone who relies on a much funnier supporting cast to do the heavy comedy lifting for him. This is actually very important to the success of How I Met Your Mother, because it stops Ted from becoming a cartoonish character. He is very easy to relate to. A lot of us in the real world have relationship issues, but that is rarely down to severe awkwardness, mainly stuff that life throws in the way. That is what How I Met Your Mother decides to focus on and that is what makes the show stronger than it pitches. Ted’s problem with women comes from his expectations of women. He is trapped with a mentality that every girl is his future wife and that love is some perfect sensation, where everything just feels right. We are caught up in his romanticism of the world around him, even if we, like his friends, don’t quite believe the world is as idealistic as Ted makes it out to be. As a result, his character feels a lot more real. His problem is not introducing himself to the women (a welcome change to Scrubs’ J.D being awful around girls, until the plot writes him in a gorgeous character that falls into his arms), but keeping hold of them. Throughout the first season, we see him fall victim to moving the relationship along too fast, breaking it off with a woman, because he believes the grass to be greener on the other side and generally being unable to relax into something more real than his dream scenario. Josh Radnor’s performance is great, because even when Ted is doing something that could be seen as quite ‘dick-ish’, his charm and inner belief keep him a sympathetic character. One midway season plot point sees him do something particularly cruel out of a sense of ‘ending up with his one, true love’, and it is a strength to the performance and the writing that we still side with him as a character.

Radnor’s character almost casts a shadow on Neil Patrick Harris and Cobie Smulders. Now you might sound surprised that I could write a review on How I Met Your Mother and find it possible to criticise Barney Stinson, one of the most iconic sitcom characters to appear in America. However, it must be said that Neil Patrick Harris is trapped with the exact cartoon stereotype I praised Ted for not becoming. It isn’t a criticism as such, because I do believe that, to an extent, he is the exception to the rule that I think this show needs. While his character becomes more three-dimensional and interesting in later seasons, right now, he is merely here for the larger than life jokes. The whole point of the character is that he doesn’t really have a character arc. He is a chauvinistic child when the season starts and doesn’t move from that position by the time the season ends. There is even an episode that dives into his back story and the whole punch-line revolves around the fact that the character can handle this life-changing soul-searching journey and not be moved by it. He is the rock in the show and one that cannot be altered. Yes, compared to the other characters, there is something a little shallow about him, his character merely there for the jokes rather than the emotion. After a while, you can almost predict every joke that comes from the character, but I think the general consensus is that we would rather have him than not have him. Cobie Smulders doesn’t have much luck. She does grow as a character in time, but right now, she is trapped in the role of ‘the trophy girl’, the object of desire that Ted is aiming for. She does break away from that role occasionally, but her whole story revolves around being torn about her feelings for Ted. Smulders doesn’t quite have the natural charm of the other four actors to really break out of the stock role and as a result, Season One sees her as the weakest player. Not weak, just not as on form as her co-stars. 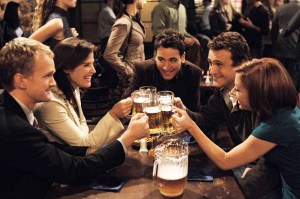 However, Jason Segel and Alyson Hannigan are incredible, stealing the show almost on a weekly basis. Right from the first episode, they cement their personalities and never budge from their stance. They are the cutesy couple, but done in a way few shows have done before. Friends was never any good at writing couples, always making the characters out to be happy with in each other in spite of their flaws. Monica and Chandler’s stories often depicted them handling something frustrating their other half does on a daily basis and overcoming it because they were ‘in love’. It was cute, funny but did little to celebrate being in a relationship. Marshall and Lily are the complete opposite. Everything about them celebrates being in love. If Robin and Barney are the diehard singletons and Ted is the fluctuating romantic, these two act as the other end of the scale – being in a couple has endless perks. The two of them are constantly coming out with in-jokes and sweet moments that have you falling in love with them time and again. They also have the most interesting story. While Ted’s romantic quest is amusing because of the repetition of it all, Marshmallow and Lilypad always have something interesting up their sleeve. Marshall is forced to re-evaluate his ethics to prepare for a wedding, Lily moves in with Marshall and there is a shocking end to the season that has you closer to tears than you would think possible for a twenty minute sitcom. For me, these two are the glue that holds the show together.

On top of these great characters, the first season also has some stellar episodes. A lot of shows need some time to work into the great comedies they become. Scrubs and Cougar Town needed to build their supporting cast up, Friends needed you to connect with their stars and Inbetweeners needed to prod their audience to figure out the humour they eventually would become. How I Met Your Mother is already there from day one. There is some fantastic comedy writing here, every episode teaming with laugh out loud jokes. It’s not just the humour but the wittiness of the writing. One of my all-time favourite episodes is Mary the Paralegal, because while it is impossibly funny, a twist at the end makes a second watch even better. There is also fun to be had with Marshall breaking into a new job, a limo ride around New Year’s Eve and a nightclub episode that will have you in stitches. All in all, the first season definitely shows the audience the direction it wants to take. No rise and fall in cadence, just ‘hyped’ all the time – in Barney’s own words.

Final Verdict: How I Met Your Mother wastes no time in setting itself up as a great sitcom. There’s even a sword fight.