There’s something ‘once-in-a-lifetime’ about Tropic Thunder that means for all of its flaws and low points that you end up loving it regardless. Right from the opening, you know that this is a comedy unlike any comedy you have watched before. It kicks off with some genius mock movie advertisements for each of the lead actors, shown before even the production logos, to trick the audience into thinking they are real for a small moment in time. It is an inspired move, brilliantly breaking the fourth wall and developing both the characters and satire, before we have even begun. It only gets better from there, throwing us right into a crucial scene in the movie, where we see these actors as their Vietnam counterparts. Ben Stiller plays dimwit, ageing action hero, Tugg Speedman playing the action hero icon, FourLeaf. You can see where this movie gets confusing. But it is in those blurred lines that Tropic Thunder becomes something special. You cannot help but feel that the running joke that Kirk Lazarus getting lost in role after role is intensified, seeing as Robert Downey Jr. is playing every one of those roles. Maybe some reviews are right about the fact that while Tropic Thunder claims to be a mocking look at the movie industry, it never touches upon the nitty-gritty of their gags (the actors, agents and producer are always comic book figures, rather than clever dissections of real-life counterparts), yet in never being anything less than entertaining, you never realise these problems until reflecting on the movie at a later date. And even then, you find yourself not really caring too much.

Ben Stiller plays the movie straight. Knowing that the absurdity of the concept is enough to bring the laughs, he doesn’t really play on the comedy of the moments, rather allowing his screenplay and direction to treat the scenario realistically. It makes the action side of things much more prominent. There are only a few moments where the actors take a break from the shooting and running to make a quick gag. The rest of the jokes are mainly consisted of sitting back, watching Ben Stiller run across an exploding bridge and chuckling at how the movie has gotten to this point. Yes, this does mean that, while there aren’t any bad points in Tropic Thunder, there are long scenes that aren’t quite as good as other points. Large sections where the script relies on the chemistry between the comedians to keep the movie ticking over, something that might work for a more traditional comedy, but in a film that opened with a Michael Bay-parody explosion, you crave a more immediate thrill from your laughs. However, the holding back on easy jokes makes the ending so much funnier. As it descends from a Vietnam parody down to an all-out gun battle in a heroin production factory, it excels in both the action genre and the comedy. As Stiller’s Speedman is kidnapped by terrorists, he believes that it is the director forcing him to method act. He asks to reshoot the torture scene. The gag is belly-achingly good. Just as amusing is Speedman’s agent mistaking the Flaming Dragon terrorist group as another agent agency and unwittingly threatening them. As a result, Tropic Thunder becomes a ‘Nam movie for people who hate ‘Nam movies. Finally, they will understand the thrill of the chopper ride into the war zone, accompanied by an awesome soundtrack and the over-the-tops practical effects used on gore. Danny McBride’s portrayal of an over-enthusiastic special effects engineer is pretty close to the mark. 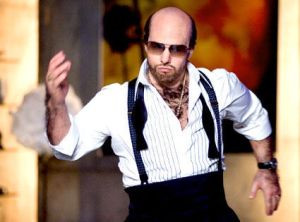 Tropic Thunder also boasts an amazing cast. Without even touching on the celebrity cameos (Jennifer Love Hewitt and Tobey Macguire show up to add realism to the Hollywood parody feel), Stiller has assembled a powerhouse cast. Jack Black is always best when parodying himself and his drug-addled comedian, trying his hand at a serious role, is great, especially a scene when he deliriously offers sexual favours in exchange for drugs. This is also the film that put me on the McConaughey bandwagon. Seeing as he is now a serious actor, this could be the best movie to go back and look at his older stuff. It sees him handle the genre that put him on the map, but without the cheesy chick flick atmosphere that held him down for so long. McConaughey is the master of comedy as well as dramas like True Detective and Dallas Buyers Club. But the reason you are watching this movie is probably for Robert Downey Jr. He is incredible. He plays Kirk Lazarus, a method actor so extreme, he plays the entire movie in character, blacked up to come across as African American and sprouting pompous lines that make you want to slap him. How can you not laugh at him and Stiller being trapped in character during a reunion scene in the terrorist camp? They play it seriously, but you are just laughing at how far up their own asses the characters are. Which is totally the point. Downey Jr. almost steals man of the match. Almost. There is the small matter of the legend who is Tom Cruise showing up as the producer of this movie and throwing everything you knew about Tom Cruise out the window. An accurate description of what to expect from Cruise here is the suggestion that him and Stiller swap genres from this one. Stiller is the action hero at the head of this movie and Cruise is… Well, just watch and see for yourself. All I am saying is that his performance creates the best closing credits scene in cinematic history.