The Land Before Time: The Review

Director: Don Bluth
Cast: Gabriel Damon, Candy Hutson, Judith Barsi, Will Ryan, Helen Shaver, Bill Erwin, Pat Hingle
Plot: A group of young dinosaurs are seperated from their parents and herd in an earthquake and must migrate to safer lands on their own.

Everyone has a childhood film they like over everything else. For example, most of my age group are devoted to The Lion King, the film that was released just when they were old enough to sit down and appreciate cinema. Older audiences might find their childhood more devoted to the classics, like Bambi or The Fox and the Hound. Sometimes, a whole generation can be enchanted and won over by a single Disney film, coming out the right time. I guess, the hype over Frozen right now makes guessing which movie today’s children will be getting nostalgic over in twenty years relatively easy. Of course, this is all to do with parenting and what films we, as children, are put in front of first. This is why that sometimes, you could end up like me and have your favourite animated classic a movie outside of your actual lifespan. My parents knowing that the young me was fascinated and in awe of dinosaurs bought me a copy of The Land Before Time and ever since, it has been one of the most memorable cinematic experiences in my life.

It means that I am able to overlook the flaws that critics have, quite rightly so, thrown at it. The main complaint isn’t necessarily down to quality – rather a case of this story being done so many times before. Remove the dinosaurs from the equation and we are given a routine tale of a group of young children separated from their parents and asked to go through trials and life experiences that shape them into their adolescent years. We have discussed that recently with Pinocchio and, even more criminally, the storyline could be copied straight from the film the director and producers worked on together a few years earlier, An American Tail. So no, if you are looking for a movie that has something thematically original and engaging on a new level, then Land Before Time isn’t about to win over any new fans. However, on the other hand, I am able to look past the lack of originality and discuss how well these themes and topics are handled. For example, racism and segregation. Having your characters as dinosaurs, suddenly makes this a much easier subject to broach. As adults, we know that the herds working together in this film shouldn’t mix. The Brontosaurus lead character, Littlefoot, doesn’t hang out with Cera, the Triceratops, because their entire culture has it engrained that herds don’t mix. Long necks do not hang out with Three-Horns. However, when the two of them are alone in the wild, the only way they can survive is to band together. It is there they are forced to question why exactly they hate each other. As a child, you don’t understand the politics of it all, seeing the main characters as the herbivores, the ones that need to band together to take on the predators. It makes no sense for them to fight. And Don Bleuth slowly allows the adult audience to realise that too, his story slowly showing the various dinosaurs team up and improve each other through their friendship. Yes, this has been dome before, but The Land Before Time does it so well. 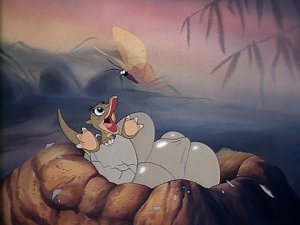 It is also a movie that burns itself onto your memory. It has always stuck with me, because there are so many fantastic moments. The animation is amazing, hand-drawn and depicted perfectly on the screen. As an adult, certain frames just take my breath away. Cera stumbling across the ‘believed-to-be dead’ T. Rex. The tar pits and lava breaking away the lead characters. Any scene where the Sharp Tooth catches up with the children. Most of my childhood films are hazy memories that I loved rediscovering (I remembered very little of Pinocchio until watching it last month), but Land Before Time, I remember beat for beat. Every detail, every line of dialogue works beautifully, conjuring up all the right beats of imagery that I needed to retain the spectacle of what I was watching, despite being too old to understand the complexity of cinematography. Of course, maybe a healthy dose of trauma made the memory that little bit stronger. Most children’s films have a gruesome death of the parent scene, hammering home the point that the lead children have to move out of their parent’s shadow, in order to mature as characters. The reason Land Before Time is a tragically short movie is because so much had to be cut out from the director’s dream product, seeing as it was too horrific for the children. The battle between the Sharp Tooth and Littlefoot’s mother is heart-breaking. It is up to the audience whether that scene is memorable, or just far too visual. Other than that, my only problem with the movie is the use of children’s names for the dinosaurs. I understand why they were cut out and replaced with child-friendly nicknames, like ‘Spike-tails’ and ‘Three-horns’, but it does kill me that a generation of kids go on, thinking that those are the names of that breed of dinosaur. Mind you, who hasn’t used the term Long Neck, rather than try to wrap their tongue around the word, Brachiosaurus?

Final Verdict: Later on, I recognise flaws in this animated movie, yet it still remains one of the more powerful childhood movies I have seen.