May 7, 2015 VivianHorner Comments off Uncategorized

Heroes wastes no time getting back into the action, instantly picking up from where it left off. Nathan is shot twice in the chest, trying to reveal his secret powers to the public and moments later, we are told that the shooter is Peter Petrelli from the future. In his version of the future, someone has created a formula that has given everyone superpowers, making them uncontrollable and resulting in a chaotic apocalypse. Back in the present day, Hiro Nakamura discovers one of his responsibilities as the new head of his fatherâs empire is to guard this formula, something he messes up seconds later. Hiro and Ando are forced to track down the woman who stole the formula, unwittingly getting caught up in the plans of a monstrous villain, thought long dead. But he isnât the only villain that the heroes are forced to worry about. Sylar is back, torn between his urge for knowledge and a shocking secret that threatens to tear his world wide open. Or perhaps the real monster is closer to home, as Suresh experiments with his own power-giving formula and Claire Bennett begins to train herself into fearless killer that future Peter Petrelli is being hunted by in the future. 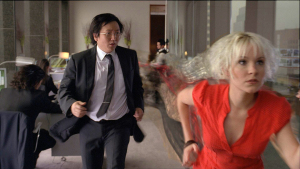 It took me a long while to figure out what was wrong with Heroes. As it carried on with its twist-filled plot, cliff-hangers cropping up three times an episode, it just felt off. Season Two was flawed, yes, but it was still enjoyable. Heroes Volume 3 (the third season is split into two volumes â this review is of the first volume), just felt like a shadow of its former self. Its story didnât feel just unpredictable; it felt ridiculous and full of nonsense. Suresh begins evolving into a scaled monster, Sylar is actually a nice guy all along, Hiro becomes a ten year oldâ¦ This was the point people had warned me about; the point Heroes officially came off the rails. And it took me a good time to figure out why it was so bad. There is no character development. Well, there kind of is, but not the correct kind of characterisation. On one hand, it is almost hard to blame the show on this deal-breaking problem. Heroes plays itself loose and fast, every scene lasting a few minutes, sometimes only a few lines of dialogue, before we are jumping off to see what another character is up to. There is no time for anyone to evolve as people in the short space of time they are given. On paper, they have very interesting character developments. Heroes turn into villains, families are butchered and difficult choices are made. Heroes prides itself on its complex characters, always having one episode a series where we jump into the future and see just how much everyone has changed. However, as the show goes through this changes, it doesnât feel natural. The characters are forced to evolve into something else, but they only ever do so through their actions. They announce that they are moving to the dark side, rather than letting the audience see their slow corruption or the collapse of their beliefs. This has always been a problem with the show, but seeing as Season One was back in a time, where no one knew anything about these people, we never realised it. As we hit the third season, it is time for the characters to evolve in order to keep our interests, but the clipped style of story-telling means that they never can. It creates this awkward gap in narrative that makes Heroes a sequence of peculiar twists, rather than a well-orchestrated narrative thread.

Weirdly, as the third volume hits its ending, things pick up. Perhaps it feels more natural to have the ending episodes have less focus on character and more focus on action. It is also a nice surprise to have the series broken into two volumes, rather than a full season-long story. While the second season suffered from less time to show off its story, Volume Three benefits from the shorter running time. It would have just been forced to get even crazier and thatâs not something that would have really worked at all here. I was surprised as an episode I thought would be a by-the-numbers part of the story ended up as the big finale, several characters being killed off and new twists cropping up. Character arcs that went awry are corrected and new ones begin, opening up interesting ideas to the second half of Season Three. Volume Threeâs highlight is the two part story where another eclipse shows up. It has nothing to do with the villainâs plot, but it does stop everyoneâs powers while it is covering the sun. It brings up interesting ideas and reduces the most powerful characters into vulnerable messes. Claire Bennett begins suffered from her wounds, exacerbated because her immune system isnât used to actual injuries. The most dangerous bad guys are suddenly cheap targets. And on a totally lighter note, Heroes has fun. It is amusing taking this small time to parody everyone, as they jump into action unaware that they donât actually have any powers. It was a refreshing break from the serious side of the show and Heroes suddenly became the light entertainment I wanted it to become once again.

But we are still far from the ideal place I want Heroes to be. It has got to the point where the show seems unaware of the unique selling point it has. Heroes is essentially a story about superheroes, mutants being gifted with powers and learning how to control them and then deciding how to live their lives with these powers. At the same time, they are not unstoppable. In fact, most of them are quite flawed. Just because one has a power, does not make them an overnight vigilante. Heroes used to take perverse pleasure in having a power turned against the user from something simple. It is why the human hero, Jack Colemanâs Noah Bennett was such a fan favourite â he had no powers, but he had smarts, something the show rated more than the ability to shoot electricity from fingers. The best example is Claire Bennett. She might be invincible, but she is still the showâs helpless heroine â usually little more than a macguffin, which should be endlessly interesting. There should also be a grittiness to the show. I like that fact that these superheroes and villains can build up a vast array of influence and power, yet still be stopped by a few bullets to the chest (see Nathan Petrelli in Season Twoâs shock ending!). Season Three only ever uses this advantage a handful of times, instead being happier to babble on about good and evil, as though we are flicking through an old-timey comic book, before any form of interesting narrative was truly developed. It is a show trapped walking backwards and I worry that this wonât stop anytime soon.

Final Verdict: Heroes is losing its magic touch, miles away from the great opening season. Yet there is still enough charm to stop it from being a total disaster.