May 4, 2015 VivianHorner Comments off Uncategorized

I love a good detective story. Mainly I turn to novels to get my fix of crime thrillers, but every now and again a movie or TV show will hit the nail on the head. They are surprisingly tricky to get right, the key part of the story often being buried in the twist (there are rarely any memorable villains in crime fiction, because they only get their reveal in the final twenty minutes). Insomnia is one of the few crime mysteries to truly work, offering a meaty detective narrative, with the added bonus of being directed by my all-time favourite director, Christopher Nolan. 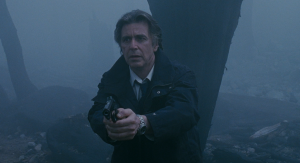 There is a beauty to Nolan’s direction, really lighting up what could have been a fairly rote story. The setting of Alaska is terrific, the burning 24 hour daylight throwing an eerie illumination into the cinematography. As ever, exposition is told minimally, Nolan being able to summarise an entire character arc or drop a massive clue with one lingering frame. It makes the detective story easy to follow, as Nolan’s way of story-telling isn’t hard to keep up with. Of course, this isn’t a story as complex or mind-boggling as Inception or Following. In fact, as far as detective stories go, this one doesn’t hold too much twists and turns. The killer is revealed early on and when the identity is out in the open, the story becomes a case of catching him. Dormer and this killer end up in a dangerous game of cat and mouse, as Dormer finds his Internal Affairs investigation being used against him. The moment the bad guy feels the cops are getting too close, he dangles evidence that could directly incriminate Dormer, forcing the detective to send his own team running in the wrong way. The killer’s explanation is so chillingly logical, that even we, as an audience, begin to side with him. If the killer gets away with it, Dormer isn’t punished by Internal Affairs, which means every criminal he has arrested will stay behind bars. There is also the tempting fact that the scapegoat is a nasty piece of work in himself, far less likeable than the real murderer. Insomnia becomes a film, where we watch Al Pacino’s detective, transfixed and unable to predict his next move.

As a result, Insomnia becomes far less about a crime mystery and more an exploration of character. Al Pacino is on fine form, as the honest cop who lost his way. If I was to criticise, I would point out that we have seen Pacino do this performance before, quite a few times as it happens. Like Heat, he plays a talented detective that is strangely hard to relate to. Pacino has the way of being hard to connect with as a character, like an island rather than a hero. He is prone to angry outbursts (again, Heat), and his history is troubling. Of course, the main flaw with his character is the insomnia, as he struggles to sleep which makes it an agonising experience, as the case deepens. He has to stay ahead of both his team and the killer, but as he goes yet another night without sleep, he isn’t thinking straight. You are never sure if he is able to follow through with his plans or if his exhaustion has made him overlook a crucial detail. But it is Robin Williams, who steals the show as the movie’s baddie. There is something so ordinary about him, that it is hard to believe that he is capable of the things he does. He calmly insists that the brutal killing was an accident, never seeing himself as a villain, but a victim. His relationship with Dormer is up there with one of the most interesting good guy – bad guy pairings (yet again – Heat!). As Dormer waits in Robin William’s apartment for him to come back, the killer rings him and gives him permission to use the shower and even asks him to feed his pet dogs, while he is in hiding. For an actor as energetic and wild as Robin Williams, it is great to see his most restrained performance to date, as he softly purrs his lines and calmly confronts Pacino. Mind you – what is a Christopher Nolan movie without a show-stealing villain? 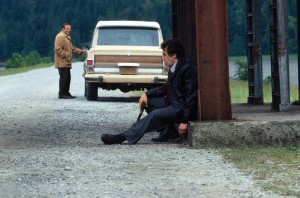 Where does it rank on the Nolan scale? Well, its bigger budget and more Hollywood style surpasses his early attempt with Following, but the detective story does hold it back from being too memorable. This is the one Nolan movie no one remembers, a little too simplistic and ordinary. After Inception and Interstellar, we have come to see Nolan as the master story-teller and surprisingly, his detective story is his simplest one yet. I admire the fact that Nolan doesn’t feel the need to throw a twist into his story, especially as I was worried this was going down the ‘it’s all in Pacino’s head’ road, but it feels strangely restricted by its narrative. There’s a murder to be solved and a bad guy to catch. It might be dressed up with a dark anti-hero and an Internal Affairs case, but this is a fairly by-the-numbers crime thriller, when all is said and done. Sure, with Nolan, Pacino and Williams, it is a worthy entry in the Nolan series, and definitely worth a watch for anyone who loves this genre, but it is probably the most forgettable of his films. However, if this is the weak link, then it just goes to show how incredible a director Christopher Nolan is.

Final Verdict: Anchored by Al Pacino and Robin Williams, Nolan weaves a gripping detective drama that might be light on the mystery, but delivers on the thrills.