Dude, Where’s My Car?: The Review

May 4, 2015 VivianHorner Comments off Uncategorized

Director: Danny Leiner
Cast: Ashton Kutcher, Seann William Scott, Jennifer Garner, Marla Sokoloff, Kristy Swanson, Charlie O’Connell
Plot: After a heavy night of drinking, Jesse (Kutcher) and Chester (Scott) have no memory of what happened the night before, including where they parked their car.

There’s no arguing against it. Dude, Where’s My Car? is utter crap. Right from the very first few jokes, you realise that this is a movie that left its brain at home. It doesn’t get any better as the movie progresses, pretty much totally devoid of a plot. As The Hangover proved, the whole ‘retracing the steps of your drunken night out’ routine is a pretty funny one, often boasting inventive and crazy ways of keeping the story suspenseful and outright hilarious. Dude, Where’s My Car? doesn’t have that. It almost seems to be drifting along, totally unaware of where it is going, making up the rules of the story as it goes along. The writers and the characters share that same oblivious way of going about their journey, no one ever being quite sure what is just about to happen. Characters pop up again, rather than being woven cleverly into the narrative. Shocks and surprises are so undercut by the ridiculousness of the tone that they never hit home. The movie crashes through its running time, like a confused and injured animal, eventually grinding to a halt, when it feels it has lasted long enough. Everything is done so heavy-handed that few of the topics or themes feel like they have done justice and this movie only really works for those people that have their bars set really low. This could be the ideal no-brainer comedy to stick on when you’re nursing a hangover, but otherwise, it bears little reward for the audience. 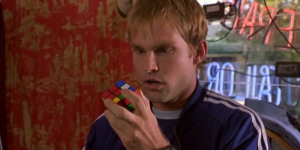 It isn’t just stupid. It is also just that little bit tasteless. I am only 23 years old and I felt that the jokes were aimed for a crowd much younger than me. Sure, I get that the movie is meant to be beyond stupid, amusement coming from repetition and pretty much the same few jokes being used again and again. Some of them work, the moment where they discover they got tattoos from the night before, perfectly using the heroes’ stupidity and the repetitive style of humor to hit a few good laughs home. However, there are far too many jokes where you just wonder where the comedy is meant to be. Women are handled beyond poorly. Whenever a female is on the screen, you start to feel a little bit embarrassed. Jennifer Garner and Marla Sokoloff just about get by as the two twins dating the idiots. They are only really let down by the fact that they put up with so much shit from their boyfriends, but at least they don’t have their dignity dragged through the mud by the script. Some women play strippers who are secretly blokes. Another actress is given the surname Boner and is characterized from her breasts. The alien invaders (oh yeah, there are aliens in this film – I forgot to mention that!), are disguising themselves among us by being gorgeous women who are willing to dish out sexual favors to get their hands on a planet-destroying weapon. The only joke that this female objectification manages to hit home is one funny scene when a blind kid uses his disability to his advantage, when interrogated by the alien hot chicks. Maybe if some of the other jokes worked, then I would be able to put up with the horrific misuse of female characters. Hell, several other comedies drag their female characters through the dirt and come out of the other side forgivable. However, there isn’t really a light at the end of the tunnel for this film.

Yet, at the same time, it somehow does end up quite likeable. I am unsure when I actually started defending Dude, Where’s My Car? instead of continuing my attack of it, but I have a feeling it is something to do with the leads. Ashton Kutcher and Seann William Scott are surprisingly charming in their respective roles, as the two bumbling idiots trapped in this adventure. They are both far better than the material given. They are a cross between Dumb and Dumber meeting Bill and Ted, yet never as good as the two other movies. Seann William Scott in particular looks like he is a lot better than the character he is asked to play, suffering from having to nervously chuckle whenever he is too close to a pair of breasts and often fixed with a vacant stare that makes it harder for him to act in between jokes. Ashton Kutcher is luckier, his character being the slightly smarter one (I use the term painfully loosely). His idiot has a bit more of a kick to it and his charisma will get you through the low points of the film. This movie is at its best, when the script’s jokes are put on the backburner and the two of them are allowed to flex their comedy muscles with some improvisation. An exchange between the two of them involving a fire extinguisher and two goons that need to be offed is beautifully dense, giving the audience plenty of excuses to face palm, but laugh about it later, rather than cringing.

Final Verdict: A terrible attempt at comedy, but it is endearing in places.