Leon is not what you expect. Oh, for the first ten minutes, it hits every note you think it is going to. A room full of gangsters that need offing get picked off one by one by a shadowy figure, known only as Leon. The direction is keen, keeping everything shown through extreme close-ups and glorious shaky-cam. It is tense, explosive and the action thriller Leon was probably sold to you as. However, as soon as that gruesome shoot-out is done and dusted, it becomes a totally different movie. Sure, the finale has a few set-pieces up its sleeve, but even that is handled with brains rather than action. No, Leon is not really an action film, in the realms of Besson’s other works, like Fifth Element or Taken. It is a character study that keeps its nasty villain on the side-lines and simply explores the unusual relationship between Leon and his 12 year old protégé, Mathilda. This isn’t a criticism. No, as a matter-of-fact, this is what makes Leon one of the greatest movies I have ever seen.

Who needs the same old tired shoot-outs when Besson has something truly original to show us instead? Leon is such a unique and interesting figure that we have no problem spending a movie just watching him, never getting any closer to figuring out what makes the man tick. There are few moments where we understand Leon and the movie gets by, almost as if we are in a zoo, watching a completely unheard of animal through a glass cage. We are fascinated by his mannerisms, his quirks (drinking milk, washing his plant), or his daily routine. The opening sets him up to be your everyday badass hitman, but as that scene fades to a close, he becomes so much more. He talks to his employer like a confused child, receiving his fortune gathered from years of assassinating in pocket money format (which begs the question if Leon is being manipulated by imaginary funds). He cannot read or write. He steers away from social situations. In an even braver move, Besson writes him a relationship with a twelve year old girl from next door, who ends up needing to be looked after, when her family is shot to pieces by a corrupt DEA unit. At first, we assume we are in for a dysfunctional father-daughter relationship, but the characterisation takes a strange turn. Mathilda expresses her love for Leon and the film enters strange paedophilic waters. Besson walks a tightrope, always a few moments from crossing the line and entering the territories of perverse or uncomfortable. By the time the movie ends, you are still not quite sure whether he went too far or not. Mathilda does lie to Leon and say she is 18 and, despite her very clearly being underage, Leon’s social reclusiveness does just about suggest that he doesn’t know any different. Leon never quite returns her love, but it isn’t for the reasons you would think. He never accuses her of being too young, rather spurns her love because he is still heartbroken over his last girlfriend. A scene where the two of them share a bed might turn a few stomachs. It is shaky territory, but in a way, it works to keep you glued to your screens, and it helps the movie finds a new way of keeping the tension ticking over, when the movie slows down. It is the very first ‘will-they/won’t they’ chemistry, where the audience is firmly fixed on the ‘won’t they’ option. However, that being said, when the two of them go through some tricky trials, we do feel the emotional resonance as their relationship is tested. 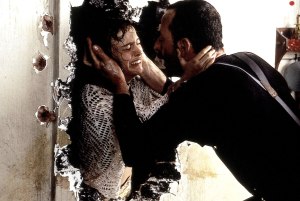 Leon might be an odd duck, but hitting even stranger tones could be said of Gary Oldman’s scene-chewing villain. Oldman has done subtle before, his performance of Jim Gordon in the Dark Knight trilogy, underacting with refined precision. However, here, he just lets rip and has a field day. He adores Beethoven, pops a pill before he murders anyone and attacks the camera like an overacting drama student. Yet somehow it is glorious. Perhaps this is because it is Oldman, we are talking about here – some audience members have come to see just how crazy the performance is. Or perhaps because the movie is surprisingly low-key on action, he is a pleasant reminder that there is a despicable antagonist out there to receive some form of comeuppance. Gary Oldman truly is a veteran actor and it is rare for anyone to steal a movie from out under his feet. This is especially bizarre as in Leon his performance is beaten by a 12 year old girl. However, Leon is definitely Natalie Portman’s show. She is phenomenal. Reno might have the right character and Oldman might go for broke, but it is Portman that sticks with you when the credits roll. Her character is superb, the troubled young girl that acts out yet at the same time has very clear goals and priorities. Even when the more sexual undertones of the performance start creeping out, Portman makes it work, never quite letting Leon become tasteless. Her range is beyond incredible, especially for her age. There is no moments where you doubt the power of the actress, but let her off because of her age. She gives the veteran actors a run for their money and guarantees a fruitful career ahead of her.

Final Verdict: Leon is one of those movies that will stay with you for a long time. Every note, even the weirder ones, hit and a cult movie is born.