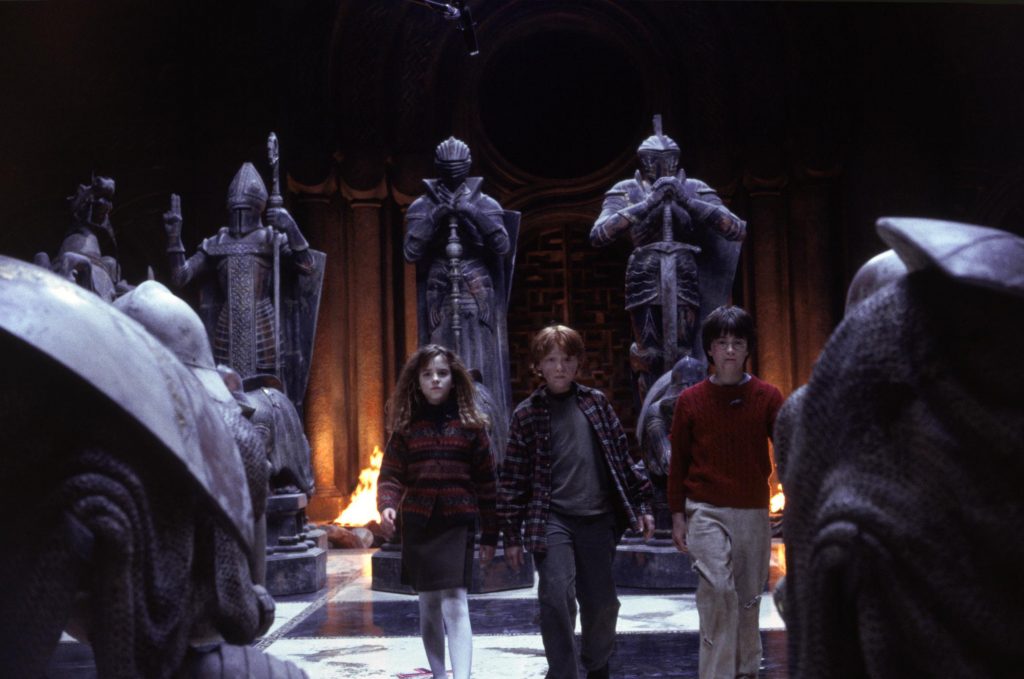 Harry Potter And The Philo-Sopher’s Stone: The Review

Escapism hasn’t really been done as on the nose as it has been with the Harry Potter stories. A boy of mundane upbringing suddenly realises he is secretly a wizard, his real parents slaughtered by an evil sorcerer, He Who Must Not Be Named. With that, he is whisked off to a hidden school where he learns all manners of spells, all the while becoming a key in a growing battle between good and evil. It really is a tremendous creation and it is up to Chris Columbus to steer the first movie (and with a fan-base this big, of course, there is going to be a movie), into the public eye and appreciation, a daunting task if there ever was one. 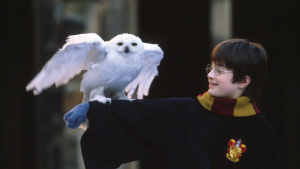 Columbus plays it safe. Well, there isn’t really any other way of making this movie. It is an extensive story, packed with loveable characters and there isn’t one scene that really deserves to end up on the editing room floor. There is no space for a creative flair or post-modern take on the book. All Columbus can do is tell the story, chapter by chapter, ripping the pages on the book and dumping them onto the big screen. Suddenly, the visuals become the director’s best friend. Seeing as he had to stick so closely to the original story, he had to make his secret weapon doing the universe and readers proud, when it comes to the set-pieces and backdrop of Harry Potter. I am pleased to say that he does. Hogwarts stands tall, firm and beautiful. The Great Hall is just how you imagined it. Fluffy is terrifically realised on the big screen. For me, The Philosopher’s Stone’s star of the show was whoever designed the locations (closely followed by the cinematographer and whoever made that amazing soundtrack). Harry Potter movies are cursed (it seemed the most apt word to use), with break-neck pacing. Sure, we want to revel in Diagon Alley, but we’re thirty minutes in and haven’t even seen Hogwarts yet. As a result, as soon as we glimpse our favourite bit from the book, we are racing off to the next bit. It is a miracle that the set designers make as big an impression as you do. Go back and watch this film and let the little bits of detail tucked into the world of Harry Potter sink it and amaze you. Olivander’s shop is eerily beautifully, yet so brief a scene it is so easy to miss. The Daily Prophet headquarters are briefly glimpsed. It is the easiest thing to forget about this movie, but when you are watching Harry Potter for the third or fourth time, this is the key that keeps you hooked and invested in the universe. It is all so beautiful, and more importantly, fascinating.

Then there are the cast. It is almost a shame that we only ever catch glimpses of them. Richard Griffiths and Fiona Shaw are having the time of their lives as the wicked Aunt and Uncle, but only ever get a few scenes to shine. Look out for Fiona Shaw’s brutal attack on Lily Potter, which might make the character a little more empathetic if we had the time to explore her feelings. Maggie Smith and Richard Harris have been pulled right out of the books, as their respective characters, instantly magnificent to behold. Other actors just fill the boots of their characters so well, they change the book’s version for the better. In the novels, I could never really picture Severus Snape in my head. After the movies, how could I have not been picturing Alan Rickman all along? When these movies finally come to a halt, we could argue that Alan Rickman is the best actor in every single one, his character so wicked yet three-dimensional, even in these early stages. But what about the three leads we are trapped with? These great children’s movies are often let down by the child actors asked to carry them. We have three adequate heroes in Radcliffe, Grint and Watson. Emma Watson is asked to play the bookish snob, not allowed to quite grow into the later Hermione that blew us all away, but she handles her lines with expertise, as if she has been doing this for years. Radcliffe does his job well enough, able to capture the likeable nature of Harry, even if the actual role is tough for any young actor. Rupert Grint might be the strongest child actor here at the moment though, his comic relief being the saving grace where the child actors begin struggling, especially in the most heart-stopping game of chess ever seen in cinema. 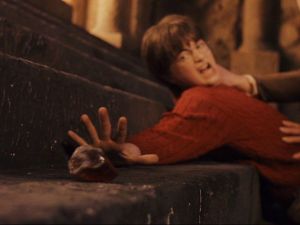 Sadly, the obvious problems are still there. It is just too busy. You almost feel sorry for Columbus, as he tries his best with the masses of material he has to condense into a feature-length film. At two and a half hours, Harry Potter and the Philosopher’s Stone is an epic of a movie, needed to be viewed in small chunks, rather than one long marathon. Yet, despite the length, there is still so much to be desired. As Columbus races through the material, there is no time to savour moments. As I said, the actors and set designers work miracles with the few minutes, or sometimes even seconds, they are asked to get the message across with, but there is still an unsatisfying taste in your mouth. Just as you are warming to Professor Quirrel, we’ve got to meet a new character. It feels criminal that an actor like John Cleese is reduced to a background role. However, because the movie’s running time is all necessary pieces of story, we are constantly being attacked with information. We rarely get a moment where we can just switch off and be entertained, because we are terrified we are going to miss a vital piece of information which will be needed later on. It is all very good, but on a first watch, it doesn’t do the book justice. This is cushioned slightly by the fact that we all knew this was going to happen, but it still stops Harry Potter’s first movie from becoming the perfectly-scored piece of cinema that we all want it to be.

Final Verdict: Harry Potter jumps from the books to the screens with amazing results. While a little rushed, it still remains a must-see piece of cinema.