Friday the 13th Part 3: The Review

Friday the 13th boasts its best leading lady since it kicked off. Finally we have not only a girl who can partially act (Dana Kimmell struggles with terrible dialogue, but at least manages to rise above it for certain moments), but a girl with an interesting back story. Scrap that, a back story at all. While Adrianne King and Amy Steel simply played the same empty character as everyone else, with the small exception that they got to survive, Kimmell is given someone with past experience with the deadly killer, known as Jason. Apparently, a year before the first film, Chris and her family stayed at a cabin, near the infamous summer camp, and Chris barely escaped an attack from Jason. Her parents buried the incident and Chris, now older and wiser, decides to face her fears by spending a weekend at the cabin. She takes her friends who want to get drunk and have sex, because this is a Friday the 13th movie after all. At the very least, as the fear kicks in, we have a character we can bond with and pray she sees it through to the end. And that brings me to the end of all the good things I have to say about this movie. 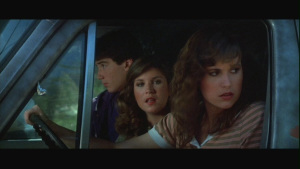 Friday the 13th is the kind of movie that is being fuelled by its cult fans. It keeps its game plan very simple. Spend next to no money on the production and rake in the cash from the millions of fans who buy this stuff, just because it is another Friday the 13th movie. As a result, we are treated to the same movie for the third time in a row. A painful five minutes goes into a replaying of the last movie (this time it isn’t even the highlights, merely a five minute scene copy and pasted into the opening sequence – terrible and lazy!). Then, it is business as usual, as thinly written characters are introduced and butchered off. I know that I am coming to the wrong place for memorable characters and decent writing, but I cannot help but get frustrated when the movie doesn’t just not develop anyone, but ignores easy opportunities for a quick chance at characterisation. The subplot between the fat kid and his blind date looks like it is going somewhere, but… oh no! Jason’s here. All story is abandoned other than the words ‘stab, stab’ scribbled onto a script. Other characters are just ignored totally. Two stoners show up at the start and literally plonk themselves into the corner of the cabin, doing nothing, until it is their time to be killed off (not a spoiler – when your characters have three lines each in a Friday the 13th movie, no one expects them to make it to the final act). Other characters are just annoying, like the mandatory sex-obsessed couple. The twist is that she is pregnant, perhaps a ploy to make us care more. It doesn’t work, based on the fact that the boy in the couple offers her a beer. My face began hurting from the level of face-palming that was going on.

The fear is poorly done, compared to the second, which looked like it was beginning to figure out how to make a Jason Voorhees movie (step one: actually used Jason!). However, other than a handful of red herrings that are surprisingly effective, if a little overdone, there is little going for the spook factor. The problem is that the same routine is always being repeated. Because no one ever finds out that they are being hunted, until the last possible minute, there is no arc to their fear. It is simply ‘nothing is wrong – oh wait, something’s up – sudden shock if they’re not already dead’. There is never any slow dread, as they realise that they are being bumped off one by one. This means that we are essentially being treated to the exact same scene again and again, made even worse because this is the third time around. Monotony is beginning to sink in. Some deaths are worth the wait (a harpoon is used in quite a good kill). Some aren’t (Chris’s boyfriend gets killed off in a laughably terrible way). Worse though is the fact that there aren’t any surprises waiting for us. We know the drill and as soon as we are halfway through, realising this movie hasn’t got anything new in store for us, the rest of the movie becomes a dull hour of screaming teenagers. At least, I finally got the hockey mask!

Final Verdict: Friday the 13th has somehow made a living out of cultdom, but on reflection, the series is just making the same bad movie over and over again.