James Bond used to be one of the greatest franchises out there. Back in the 70s and 80s, there was a reason that it was pretty much a safe bet for any production company. Looking back, a few of the older films played it a little safe, Roger Moore especially bringing out the same movie seven times, without stepping outside of the formula too often. These days, James Bond is more akin to a guilty pleasure. Pierce Brosnan’s movies are incredible in their own tongue-in-cheek way, but the franchise has nose-dived into the realms of pure male fantasy. It sometimes becomes a little embarrassing to be a hard-core Bond fan, as if you are not only appreciating a cult action hero, but embracing the subtext of sexism and womanising at the same time. No matter how much you try to convince everyone else that Bond is more than pretty girls, cars and loud noises, it often falls on deaf ears. Then Casino Royale came out and everything changed. Bond was more than the male fantasy action; it deserved awards. 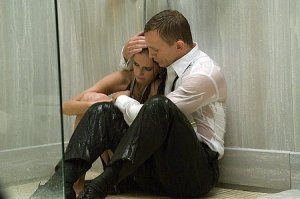 Daniel Craig might snap up most of the praise, seeing as he was the public image of this movie, but credit must go first and fore-most to director, Martin Campbell. He had rebooted Bond once before, directing Goldeneye and finding that uber-fantastical style, coupled with an underlying real fear of extremist threat. However, Goldeneye is worlds away from Casino Royale, Campbell’s newer Bond feeling more akin to a Bourne movie than anything James Bond has tackled before. The cinematography is breath-taking, instantly winning you over with a slower black-and-white opening credits sequence, and continuing to earn your approval with a tense torture sequence and a punch-up in a Miami airport runway. At the same time, there is a more knowing sense of tension, as Campbell is happy to sit his lead hero and villain at a poker table for 30% of the film’s running time and still be confident that he can squeeze that same amount of atmosphere and excitement out of his film. Sure, it is a tough pill to swallow at times and coming in cold from a Brosnan can be a disorientating experience. The action is great (parkour expert, Sebastian Foucan, pops up in an intense chase sequence early on), but sparing. Moneypenny and Q are missing. Mads Mikkelsen’s villain has no hat-throwing henchman to provide a proper one-on-one fight scene. However, if you are prepared to try something different, Casino Royale proves that Bond movies don’t have to be silly to earn its place in the action genre. It can be both adrenaline-pumping and a clever weaver of a decent story. 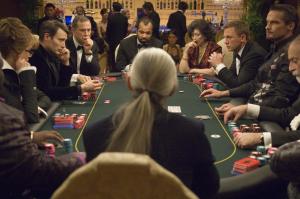 OK, now let’s talk about Daniel Craig. Yes, I still think Dalton is the better Bond, channelling that volatile charmer that I find closer to my personal vision of Bond, but Craig definitely goes in, thinking of how he can extend the character, so he is more than just another actor doing the same, old job. He received quite a bit of bad press by daring to step up to the casting, but the producers knew something we all didn’t. Craig’s Bond feels real, grounded. Seeing as this is technically a prequel, even if the James Bond timeline doesn’t pan out when put under too much scrutiny (Judi Dench is still the current head of MI6), Craig injects a certain sense of cocky bravado to his performance, making his 007 more vulnerable than before. Yet he still delivers the bad-ass nature than we want deep down, acting like an unstoppable bull in a china shop when given a target. For the first time, we see where his critics in MI6 are coming from, when they want to pull him from a case. Yes, he gets the job done, but the clean-up crew and cover stories must be a nightmare-load of paperwork for anyone. Craig is supported by some great actors too, making this a decent ensemble piece. Judi Dench is, of course, as brilliant as ever. Mads Mikkelsen became a global name with his ruthless villain. Despite being denied a Javier Bardem or Sean Bean type scene that lets him just hit home the nature of his bad guy, Mikkelsen’s performance gets through regardless, his general composure and chilling delivery enough to earn him a spot in the history books. And then there is Eva Green. Maybe, just maybe, she steals star of the show, something unthinkable for any other James Bond girl that came before. She is the femme fatale, without feeling clichéd. The hard-as-nails female hero without abandoning all weaknesses to the point where she becomes uninteresting as a character (see Halle Berry). I never thought I would call a Bond movie a terrific ensemble piece, but Casino Royale proves me wrong.

Final Verdict: Campbell and Craig reboot 007 with the greatest entry to date, providing the usual explosive action, but finding space for a powerful story and terrific acting to boot.