Insurgent’s problem is that it is far too packed. It boasts a handful of good ideas and themes, but because it has to rush off to the next plot point, nothing is ever explored properly. People have complained that the Divergent series’ biggest problem is that the initial premise is too ridiculous to make the rest of the movie possible to just sit back and enjoy, but the frustrating thing for me is that this doesn’t have to be the case. If someone was to just take a few more moments to explain the finer details of the universe, then we would be more willing to swallow the fantastical setting. Just as my brain was beginning to wrap itself around the way of life for the Candour faction, the movie looked frantically at its watch and rushed us off to the next city, like a tour guide that is drastically behind schedule. It just leaves all of these unanswered questions that makes Insurgent a really unsatisfying movie: What makes the Factionless outside of the categories and logically, are they able to take on the other Factions? Why does Erudite have control, when a coalition of Factions overseeing the other Factions would make much more sense? How can Ray Stevenson’s character be a member of Abnegation, a Faction that supports selflessness, yet abuse his wife and child? Why is Maggie Q only allowed five lines a movie? These don’t have to be problems. If I ever get around to reading the books, I am sure they will be able to break away from the action and provide me with the answers I need, but in the movie, there is just so many empty spaces in between everything. It’s not just gaps in the story, but undercooked themes and characters. For example, note how Amity, the Faction that believes in peace above all else, is the one group pushed around and bullied by the other characters, yet their trial is the one that Tris struggles with the most. I also want to know what it is like to be a member of Candour, sticking to honesty so much your life is laid out for all to see. The problem with having characters defined by a leading personality is that they are quite bland, until we scratch beneath the surface, which Insurgent never finds time to do. This is why Miles Teller becomes one of the better characters, as he seems to manipulate the Factions to his needs (manipulating Erudite, tricking Amity), as if he is the one character who seems to understand how silly a movie he is in.

But let’s just sweep story to the side for one moment. Divergent, last year, was saved by its strong actors and Insurgent can just about say the same. Shailene Woodley is, as ever, incredible here, as we begin to see the true character. The interesting thing in this movie is how blinded by rage she is. One throwaway comment sees her attack a fellow Dauntless member with a knife during dinner, intent on slicing open his throat for a single moment. We can understand why the movie hammers home the point that she is afraid of herself, because she is moments away from exploding at any given moment. Insurgent also walks a fine line between the good guys being terrorists, rather than Insurgents, especially as the movie opens with Tris and Four pretty intent on murdering Kate Winslet’s villain. In a way, it makes society’s fear of Divergents almost reasonable. Tris is Dauntless-trained, but with an Abnegation heart that makes her too volatile to have that calm composure that Jai Courtney’s menacing bad guy has. She is a ticking time bomb and Woodley has fun, exploring that side of the character. Keep an eye on her during this movie. It is the smaller things the actress does that truly impresses. When a major bad guy is shot, she wipes his blood from her arm with only the smallest tinge of regret. During a sex scene, she is the dominant one in the moment, reducing her muscular clad lover to the submissive one. These moments are good and help balance the times when Schwentke over-directs Woodley’s performance. It is hard not to roll your eyes at Tris battling the truth serum or her calling ‘Mommy’ to what is clearly a simulation. Other actors also do small things to show their talent, which helps as the movie has no time to give them a character arc. Jeanette acts as though she is hunting Tris for all the logical and right reasons, but she touches her bandaged arm too much: is this a personal vendetta hidden under the Erudite logic? Ansel Elgort becomes much more important to the plot and is never anything less than interesting to watch and explore. Others like Naomi Watts twinkle with a certain ‘watch this space’ personality. 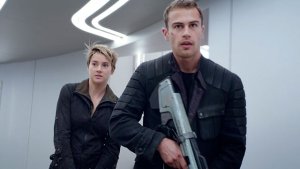 However, good acting is enough to carry a flawed first film, but when we hit the second, it doesn’t quite work again. We know Woodley is going to knock the ball out of the park, we know exactly what Winslet is going to do (not an insult to the actress, the character is just hard to do anything with), and 50% of the actors we want to see are sitting on the side-lines, not actually doing anything. Strangely, I found solace in an unexpected place: the action. As the movie opens up, it actually works as a pretty pulse-pounding thriller, perhaps due to a change in director. The first movie’s action was almost mandatory, like Burger was ticking off a box in his ‘things to do in this movie’ checklist, but Schwentke revels in his fight scenes. Sure, the ending is a little more Sci-Fi based, most of the action taking place in a simulated reality, but for the opening half, there is a lot to like. Jai Courtney is terrific as that villain you just want to see killed and when he chases down the rebels in Amity, it makes for a good watch. There is one particularly brutal moment that stuck out for me, when Tris kicks an enemy under a train. There is a short scream, followed by the train wheels silencing any further noise. It was surprisingly violent and made Insurgent feel a little more real. The final twist slightly throws the movie off-kilter, but let’s leave discussing that until the next movie, shall we? I don’t want to judge people too fast. What am I? Erudite?

Final Verdict: There’s a little too much going on for Insurgent to truly hit home, but good acting and decent punch-ups make it, at the very least, watchable.