What is a Coyote? As far as I can tell is a strange cross between a barmaid and a stripper, girls who both work behind the bar, while spontaneously jumping onto it and performing sexual dances. There is no nudity and the dancing, in real life, would probably piss off the constant swarms of customers who are left waiting behind the bar for service. Seems to me they are doing a pretty poor job at both occupations. However, job descriptions aside, we aren’t really meant to be taking too much logic from the dancing, semi-naked ladies. In many ways, they are pretty much just a plot device to get naïve and innocent Violet, renamed Jersey by the stripper barmaid bullies (great name for a band!), into the world of Coyotes. Lost in the big, mean city and miles away from getting the song-writing career that she dreams of, Violet is forced to start working at this bar, slowly changing her from the sweet, little daddy’s girl she was and turning her into someone that could, accidentally, be turning her back on a potential love interest and the career she was so desperate to get in the first place.

Critics have scolded Coyote Ugly for being a terrible story about misguided female empowerment. I can see where they are coming from, because this movie is let down by stupid little lapses of judgement. One scene sees one of the Coyotes grabbed by the crowd and heckled (the script neatly side-steps the fact that, reading in between the lines, we are nervously aware she is a few heartbeats away from being raped), only for the crowds to be distracted by a karaoke song. They are not punished later on, in fact, the barmaids happy to carry on serving the men that nearly sexually assaulted them. It is leaden notes like this that make you unsure where the writers are going with this story. However, if I ignore certain brain-dead narrative developments, there is a strong case that this movie is not about female empowerment, but empowerment in general. Somehow I managed to leave this movie seeing it as an allegory for life in general. The strange thing about Coyote Ugly is this lack of judgement on any phase of Violet’s life. She starts the movie as the innocent Jersey girl and is laughably hopeless when it comes to surviving the city. The movie highlights that she needs to change as a person, but it never makes her unlikeable, like it is forcing her hand. In fact, it seems to accept that this is a natural phase of life. The same goes for her stint in the Coyote Ugly bar, where she gets a little too caught up in the fame of being a Coyote and, to the outside world, comes across as a bit of a stripper. The movie does not judge her then either, even if the other characters do. Her potential love interest and father try to punish her for her way of life, yet Violet remains firm that ‘she has nothing to apologise for’. Only, when she is ready, does she leave the Coyote bar, and that way of life, to finish her character arc, and achieve her dreams. I took away from this film that people, not just women, but men as well, shouldn’t be judged for their ‘Coyote Ugly’ phase in their lives. It is just a stage in our evolution as people and, while on the outside it looks a little slutty and degrading, it did teach Violet, and ourselves, several things that we took into the final, more mature stage of our lives: confidence, street smarts, how to juggle tequila bottles… 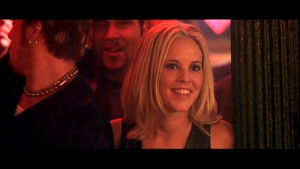 Of course, I totally missed that on my first watch. I just feel the need to defend this movie, because it does get a bad rap. The truth is, no matter what people say against this film, it is a lot of fun. It is sharp, funny and heart-warming, not to mention a true staple of 90s cinema. Piper Perabo and Adam Garcia make a cute central couple. Violet might seem a little blank a character at times, but I have a feeling that is to accentuate the argument in the last paragraph. She does well enough with what she is given, so we are always aware of how tough her life is on her, even though a lot of the plot developments seem to just hand her a way out of her problems. Adam Garcia also gets a bit of stick from his performance, but I didn’t see anything wrong with it. He was funny at the right times, so the male viewers could appreciate him for his daring and wit, while the females could just drift away at the sound of his Australian accent and the sight of his puppy dog eyes. People not bothered about any chick flick aspects will be able to find solace in John Goodman’s terrific performance as the stock father figure, stealing the best jokes in the movie. Maria Bello is my favourite actress here though, amazing as the hard-as-nails bar manager, who is cut-throat, unfair, but somehow one of the most likeable people in the movie. I think that Coyote Ugly also falls down, because it rushes the side stories too much. We never know too much about the other Coyotes and while they work as a source of gags, we never get to know who they are as people, another reason this movie is condemned for being about girls dancing on a bar. Of course, it is pretty hard to hate this movie when the final song kicks in. The soundtrack here is fantastic, something that keeps it in the pop culture spectrum no matter how much it is criticised, especially when the LeAnn Rimes tune kicks in. It is cheesy, cringe-worthy, but, at the same time, the stuff 90s movies are made of. As Violet gets stage fright surrounded by her friends and family, the night seems ruined. Then the lights are turned off. There is only one person it could be. The knowing smile on Violet’s face, followed up by a terrific finale song, speaks to the secret romantic in me.

Final Verdict: Coyote Ugly wears its stupidity on its sleeve, even if it smarter than you think it is. Deeper meanings aside, this movie is too much fun to really hate.