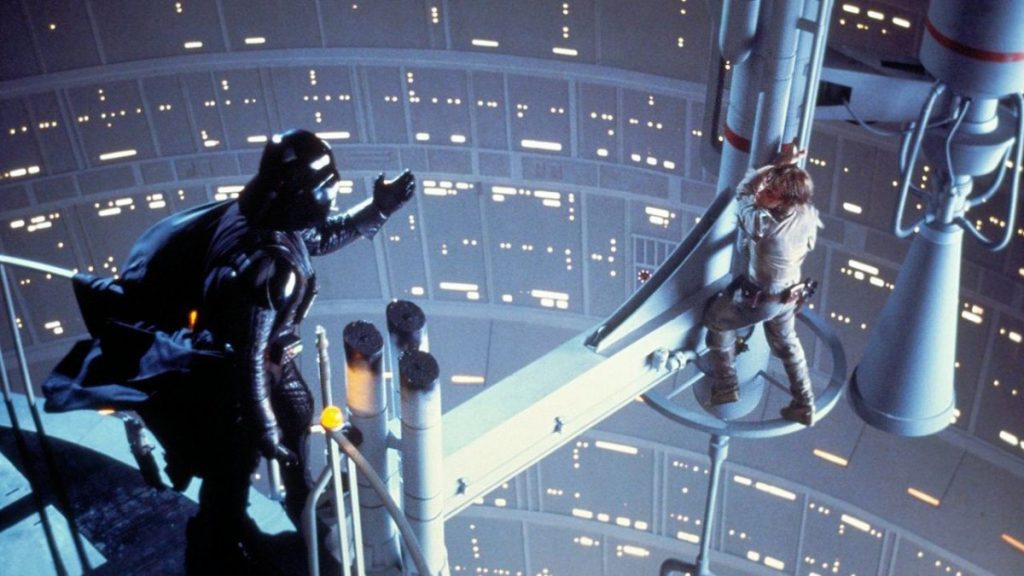 Star Wars Episode V – The Empire Strikes Back: The Review

Am I the only one that dreams of a time before Return of the Jedi? Not in a slight to the final Star Wars film yet (at least chronologically speaking), but because there is always a sense that The Empire Strikes Back would have been even better, if we, as the audience, had no idea how it would go on to end. The middle film, usually the weakest in any trilogy, is the darkest yet, perhaps suggesting that Lucas’s creation is so much better when handed over to another director, who could look past the camp silliness of the pitch. I can only dream of a world where I experience the emotional devastation of watching the credits roll on Empire Strikes Back and being unable to figure out how it would end. Although I am pretty positive that everyone reading this knows how the ultimate Sci-Fi thriller plays out, I am going to remain spoiler free as ever. Empire Strikes Back is a sucker punch of a movie, fading to black with its biggest star out of action and the leading hero rocked with the biggest cinematic twist, just outside of Fight Club and Sixth Sense. Tell you what, may I indulge in a semi-spoiler: in Empire Strikes Back, the bad guys win.

Tonally, Irvin Kershner doesn’t put a foot out of place. He doesn’t totally go dark and foreboding, (this isn’t the Dark Knight trilogy or Schindler’s List!) realising that Star Wars, first and foremost, is a means of escapism. Therefore, he opens with a world of fun and excitement. We get some of the most beautiful planets in the trilogy, worlds away from the dull wasteland of Tatooine or the faceless Yavin IV. Hoth is one of the most iconic locations in Star Wars, a planet predominantly made of ice and populated by Lucas’s take on the Abominable Snowman. After that, we cut to the murky Dagobah, which might be home to murky colours, yet it still adds colour to what would have otherwise been a rote training montage. Then there is Cloud City on Bespin, which acts as the home to the finale of this movie. It is a wondrous creation, a city built in the skies and full of lavish textures. It is the kind of setting that Sci-Fi was invented to show off. And I haven’t even gotten onto the beauty of deep space yet. Kershner works on these stunning locations and then simply has a field day, adding the action to them. The assault on the Rebel camp at Hoth is the stuff that cult viewing are made out of. The clumsy AT-AT walkers might look like a lumbering merchandise cash-in, but they prove a dangerous enemy, the closest the original trilogy ever got to a Sci-Fi tank. The fun also comes in the dialogue. Sure, it is still as cheesy as dialogue comes (“nerf-herder” anyone?), but it works. Having Solo and Leia engage in back and forth insults, over the sound of a wailing wookie and Threepio’s whiny protests is just a cacophony of brilliance. Kershner has seen A New Hope, figured out its strong points and weaknesses and has come out with the best possible Star Wars movie that could have been offered.

And then he adds the darkness. A New Hope was all about building this universe and looking back, it does come across as one of the weaker additions on a narrative level. The Empire, Vader, Death Stars… remove the fact that they are all cool and stylish to look at, and it does come across as Space Opera 101. It is Flash Gordon without the pantomime. However, with the sequel Kershner wades in and adds depth. He explores the relationship between Solo and Leia, questioning why they are still fighting for the Rebels, when they could be fleeing to the furthest planet they could find. Vader is a faceless villain, fuelled by his raspy breath and James Earl Jones’ formidable dialogue, but Kershner goes further, injecting emotion and character into history’s greatest bad guy. The Empire Strikes Back starts fun, but slowly the cogs are turned and we get to the psychologically damaging side of the story. The odds really are against these small packs of rebels. Luke Skywalker faces his fears and is forced to take on the might of the Empire too early. What follows is the greatest action sequence in Star Wars history, as Skywalker and Vader face off in the lightsaber duels to end all lightsaber duels. It is the humming red glow of the engines, the bottomless drop underneath them, the atmosphere so thick that the lightsabers themselves are struggling to cut through it. It is nothing short of brilliant and whatever flaws the following four films come up with is down to Empire Strikes Back being so masterfully iconic.

Final Verdict: Lucas laughs at the idea of the second film of a trilogy being the weakest and gives us what could be one of the greatest Sci-Fi movies ever made.