Chappie walks a fine line between being either Blomkamp’s best film yet, or his messiest.

When it comes to heart and emotion, Chappie is better than we have ever seen Blomkamp before. The very premise of Chappie conjures up a few interesting debates and the director does not disappoint when it comes to dissecting this issue. Despite the strong Sci-Fi themes and gangster movie vibe, Chappie is, first and foremost, a movie about parenting. Chappie begins the story as the sweetest thing around, instantly loveable and full of potential, not just for the police, but for technology as a whole. However, because he is brought up in a bad environment (he ends up living with a gang, who want to use his robotic strength to commit heists), that spark of good nature begins to dim slowly. His first lessons in life are on how to ‘walk like a gangsta’ and how to shoot bottles with a handgun. As Chappie veers into a less and less moral character, he doesn’t fully understand how to behave like a functioning person, because he has never experienced anything but gang life. Blomkamp is clearly giving us an insight into the tormented kids that are involved in gangs in Johannesburg and peeling beneath the easily judged figure they have become. Can Chappie be blamed for any of the crimes he commits? I also liked how Blomkamp found the time to discuss separated parents. Chappie’s father, or Maker (read biological parent), created Chappie and always has a place in his heart, but, for extenuating circumstances (he created Chappie illegally), cannot be a constant presence in his life. Therefore Chappie stays with his mother, Yolandi (the first person he set his eyes on and the person he has imprinted with the most), and Yolandi’s lover, Ninja, who acts as the volatile stepdad figure, who is the biggest bad influence in Chappie’s life. Chappie’s Maker goes to more and more extreme lengths to be a constant part in Chappie’s life, especially when we get a few scenes where Deon, the Maker, realises how much he is missing out on his child’s life. On a third visit, Chappie is already heavily involved in street life and is becoming a figure who Deon doesn’t recognise, as well as Deon becoming a figure Chappie no longer respects. Every point of the characters’ arcs are so cleverly written that every emotional surprise hits home, making Chappie the best Blomkamp movie, when it comes to its core characters.

Sadly, when it comes to actual story, Chappie is a mess. There are all of these great themes and ideas bouncing around the movie, making it feel imaginative and sharp, but when the discussions fade away and we focus on story development, Chappie feels somewhat contrived. For example, to even kick the film off, Blomkamp has to get Chappie’s body from a lab to the Ninja and Yolandi’s gang hideout. Therefore Deon somehow manages to steal government technology (not only Chappie, but a chip that pretty much controls the entire robotic police force), from a warehouse, bringing up the question of why none of the dangerously out-of-control gangs had ever tried to just hijack the robot manufacturing centre before. Then, Deon is kidnapped, on the same day, by Die Antwoord, who end up with Chappie. That entire sequence feels forced and unbalanced, like Blomkamp is racing through the painfully bad story-telling to just get to the good bits once again. There are other moments in the movie where you just feel that logic isn’t on the movie’s side. Other characters are let down completely. Hugh Jackman is the biggest star here and probably the biggest star Neill Blomkamp has had yet. However, the character could have been written far better. Hugh Jackman does what he can, but he is used to so many more levels to his character. Nasty bloke at the office just feels so amateur for the seasoned actor. Sigourney Weaver barely features. Her character is a little more interesting, her motives and morals easier to understand. However, Weaver is never given a moment to lay out who her character truly is and, as a result, you keep forgetting she is actually in the movie. Worst of all are the other gangs. Other than Die Antwoord, Blomkamp depicts the gang members that are an infestation in Johannesburg as crazy, uncontrollable lunatics. Fair enough, Chappie needs a middle act villain, but when your movie is all about trying to convince the audience that gang members are more than merciless killers, it makes literally no sense to have everyone who isn’t Chappie come across like something out of a Mad Max movie. 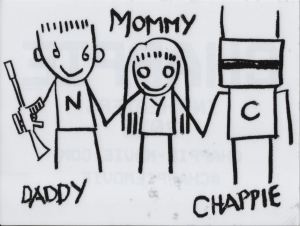 So, yes Chappie is the messiest Blomkamp movie to date. Critics are going to tear apart this film based on the plot holes, meaning that this movie will never get the respect it deserves. However, I still loved it, and this is mainly to do with its leading character. Chappie is fantastic. No matter how low the movie gets, this is a hero I can follow and empathise with. Sharlto Copley is no longer the kind of actor that can draw a crowd in with a movie (too many bad performances have brought his talent under too much scrutiny), but this could be his finest role yet, perhaps the best the actor will ever come up with. For someone that is usually assaulting our ears with a melodramatic accent, Copley is superb with his voice work here. He captures the innocence, the confusion and excitement of Chappie, sometimes all at once. The forced slang coupled with the vocabulary of a toddler really hits home, so even when the character descends deeper and deeper into gang culture, just uttering the word ‘mommy’ will have you in the palm of Blomkamp’s hands all over again. The motion capture really works too. Despite being a robot that doesn’t feel pain, Copley does a good job of making us forget this, with every wince and nervous backing away feeling real and raw. Chappie might be the only robot and CGI character on-screen, but he is purposefully written as the most human character on display here. The best thing about this movie is the heart-breaking way that Chappie is never in control of events. He is forced into committing grand theft auto and killing people, because he is lied to about the consequences of his actions. When the government comes after him, how can a child understand that he needs to be killed for the ‘good of mankind?’ Yes, Chappie might be a flawed film, but the central character is enough to make it potentially Blomkamp’s best yet.