The World Is Not Enough: The Review

Nobody does action like James Bond. Seeing as we are being treated to some pretty powerful Daniel Craig style 007 movies, I have a feeling that the Pierce Brosnan era will go down as a more playful and shallow style of film. It doesn’t have the same impact or weight. However, as soon as you tune into a Pierce Brosnan, especially the World is Not Enough which rarely lets up on the excitement, you are hooked. Perhaps, to a certain extent, the camp spy tone that Brosnan will be remembered for is actually closer to the perfect Bond than what Craig’s three attempts are. 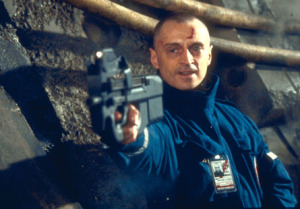 There are just so many inventive and great action sequences. If Apted is guilty of having too much fun with his entry to the Bond canon, I am happy to let the man have a field day with his vision. The opening sequence will go down as one of the best yet, and Brosnan has been given two of the better openings in the previous two films. It starts with a pretty solid shoot-out in a Spanish bank, but just as the action fades to a close back in London, it powers right back up again. The speedboat chase across the River Thames lacks logic or reason, but is so much fun, you have to pretty cynical to count it against the director. It is filled with some impressive stunts, humour that causes an ‘oh-so Bondian’ chuckle and boasts its own interesting sub-villain with Maria Grazia Cucinotta’s quick-thinking killer. But the World is Not Enough is not guilty of peaking in the first twenty minutes. The ski chase where Bond takes on three para-gliders, armed with nothing more than a pair of ski poles is thrilling and the kind of high-powered sequence that a decade ago would have been used up on a Bond film’s finale, rather than a means of livening up the first act. For more vehicular action, there are the twin helicopters that Bond takes on in Zukovsky’s caviar factory, each one equipped with chainsaws, used for cutting up several trees at a time, but remodelled to take care of pesky British spies. Then, when we do hit the finale, we have one of my favourite punch-ups in the James Bond canon. As Bond hijacks Renard’s nuclear sub, it goes off-course, hitting the ocean floor vertically. The ensuing fight takes place inside the upturned submarine, which comes across as really inventive, giving the two characters a great chance to close the movie with a gripping fight. When it comes to set-pieces, it rarely gets much better than the World is Not Enough. 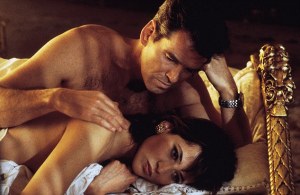 But there is something more three-dimensional this time around too. Brosnan has slowly been building on the character, since Moore left the reigns to him and Dalton. While we don’t quite get the anger and rage of Dalton’s interpretation, Brosnan finds a nice balance. We keep the fun side of the character that Moore made last seven films, yet there is a sense that the action takes a toll on him. We saw him break down over Paris Carver in Tomorrow Never Dies and we get a similar relationship with his new Bond girl, Elektra King. In Brosnan’s movies, his female sidekick is often just as strong and good a fighter as he is, this era’s way of keeping the film from veering into sexism. I think that the World is Not Enough, the one Brosnan film that doesn’t feature a woman that could kick his ass in a fight, comes a lot closer to getting that strong female figure. We care for Bond and Elektra; Brosnan really gets across the impression that Elektra is more than a quick fling. If I am invested in the romance, then I will happily buy the Bond girl routine. Of course, Denise Richards comes along with a bucketful of Christmas jokes, falling for the British spy in a heartbeat, but tradition is a hard thing to break, it seems. With Brosnan making a good attempt at bringing a performance to the table, not to mention a Bond villain that actually has an emotional journey through his character arc, I am happy to revel in a more three-dimensional Bond movie. It makes defending this chapter of the Bond canon a much easier job.

Final Verdict: The World is Not Enough has some of the best action yet, but doesn’t skimp on the characters. Denise Richards aside, that is…