Beast of Bering Sea: The Review

Director: Don E. FauntLeRoy
Cast: Cassie Scerbo, Brandon Beemer, Jacqueline Fleming, Jonathon Lipnicki
Plot: A group of dredge divers discover a new type of predatory fish in the depths of the sea, one that begins launching an assault on the mainland.

There are times I love B Movie Wednesdays. When one of these independent movies does really well or surprises me, I get inspired to focus harder on some of the independent movies I am working on right now. When a B Movie is bad, I usually learn quite a lot from their mistakes. For instance, last week I reviewed Bikini Girls On Ice and whenever they lost touch with what they were trying to do, I noted that and am now aware of common pitfalls in the B Movie genre. B Movie Wednesdays have become the most educational part of my blog, because I learn so much from them. However, occasionally I end up sitting down to watch something like The Beast of Bering Sea, which is so awful and lacklustre, I don’t enjoy reviewing it. I am just annoyed at wasting my time. 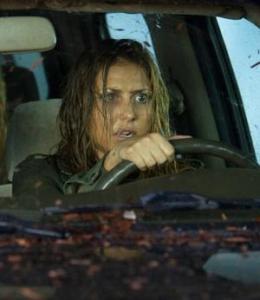 The set-up: a group of divers are competing for a plot of land at the bottom of the sea, on the hope that some lost treasure is hidden there. The divers are a family unit, weary of outsiders, but forced to recruit a deckhand, who is eager to win their favour. They lose the auction and are forced to illegally dredge there, before the new owners can get permission to head off for their own dive. Rushed, they accidentally intrude into the resting spot of a long-forgotten species of fish, provoking them to attack the near vicinity to claim back the land they think has been disturbed. I didn’t necessarily have a problem with the characters, per se. I thought the closed off family unit was an interesting concept, led by my favourite actress from Sharknado (that’s not saying much, admittedly). I wanted to break that apart and explore whether they were the villains of their own story (they are illegally diving and hide the death of their old deckhand to keep their dive spot away from the police). However, the movie has no patience for such character dissection. As soon as they are introduced, we are quickly shown the monster of the piece. There is no time for further development and my interest in the characters soon evaporated. There were no longer interesting anti-heroes; they were various people, screaming and running away from a horror movie monster. This lack of patience really kills this movie, especially early on, when it tries to mimic Jaws. A group of divers, out at sea, at night, with a killer fish stalking them. It was easy to see what they were trying to do. However, when they have their scene set up, the director has no idea how to go about getting the tension across. It becomes a case of a half-hearted attempt, quickly followed by taking the action to land, where a more traditional ‘scream and run’ B Movie comes into play.

OK, fair enough – I have seen B Movies that do this before. It becomes pack and parcel of the genre. But what really killed any enjoyment for me was the terrible, and I mean truly, astonishingly terrible, CGI. It was pitiful. Jet black and clearly conjured up quickly by a media student, it kills any tension the movie has going for it. When it first appears on screen, snarling like an over-enthusiastic Jack Russell puppy, there is a brief silence of “oh god, is that it?”, perhaps followed by a couple of sniggers. I have seen cheap British TV shows with better monsters. Perhaps it would have gone down better if the movie didn’t end up relying on these monsters being scary. Every death looks cheap and laughable, especially when the writers steals a key plot device from the Alien movies. I end up failing to understand where the appeal of this movie comes from.

Final Verdict: If you really want a movie that features B Movie monsters chasing paper-thin characters, there are better films than this.