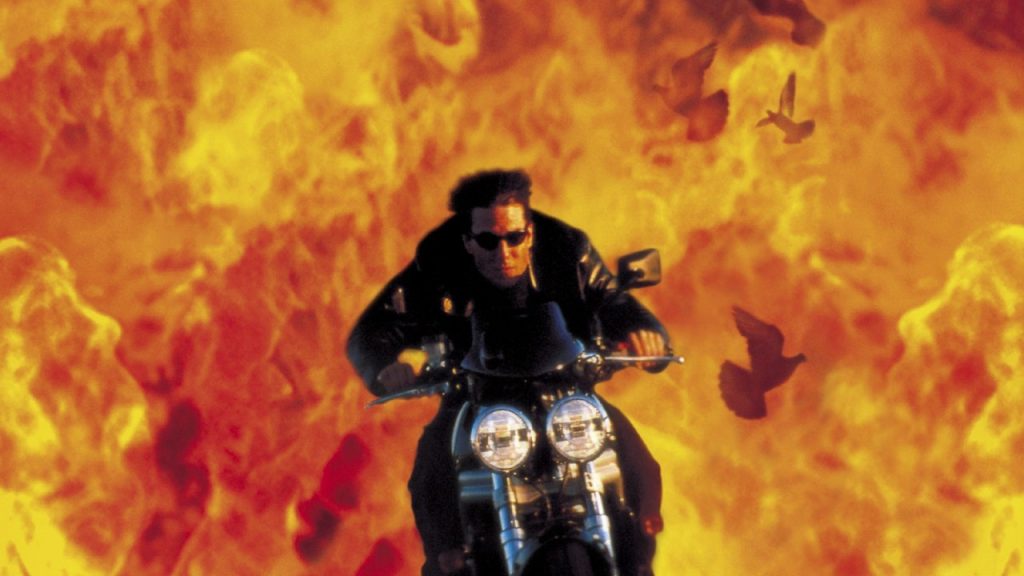 Mission Impossible 2 is one of those movies that is almost impossible to make your mind up about. Mainly, no matter how enjoyable or entertaining it gets, it is impossible not to compare it to Brian De Palma’s masterpiece. That movie was a precise measure of tension, plot and action, delivering the exact ingredients needed to deliver a thriller that is up there with one of the greatest spy movies of all time. Mission Impossible 2 has its moments, but on the whole, it just doesn’t come anywhere close to comparing to the almighty original.

Sadly, the blame lies with John Woo. John Woo is one of my favourite names in the action genre. Every movie he delivers is a simple thrill ride, a lovingly created action adventure that does what it says on the tin. Sadly, that isn’t what we wanted from the sequel to Mission Impossible. Woo strips away the intricate conspiracies of the spy genre and leans more on Tom Cruise, than the ensemble that usually makes Mission Impossible movies so gripping and unique. Henceforth, we are given two hours of Tom Cruise, doing what we expect Tom Cruise to do. Gone is the paranoia-driven and ingenious Ethan Hunt and replaced with the same Tom Cruise we have seen in his 80s movies. He is the greatest in his career, until a problem comes up, usually involving a woman (in this case, Thandie Newton being sent to seduce the villain of the piece), that requires some soul-searching, before he can swoop in and save the day. The middle act of this movie replaces De Palma’s entertainingly complicated story with several montages of the lead actor brooding and sulking. Almost every part of this movie is under-developed. The gadgets are merely re-hashes of ones that the original came up with (the face mask is done to death here), and the supporting cast are wasted. Tom Cruise and Dougray Scott get all the screen time they want, playing the over-the-top protagonist and antagonist we expect from a Woo flick, but everyone else is trapped with half a character. Polson and Rhames aren’t so much Hunt’s team-mates as they are trapped behind a computer, looking serious. Thandie Newton flicks from interesting cat-thief to the same old helpless heroine we have seen so many times before. Even the henchmen, namely Richard Roxburgh’s fun South African killer, don’t get as much screen time as you want them to. As a result, Mission Impossible feels like a simple distraction rather than a rival of the other spy movies out there. John Woo’s Mission Impossible isn’t really competition to 007, rather than a movie dressing up and pretending to be James Bond.

But, the truth is, when the movie wants you to have fun, you have it. I can complain about the paper thin characters as much as I like, but John Woo can handle a set-piece, when he is called upon to deliver one. Tom Cruise abandons the spy game and goes full action hero. Yes, it screams Cruise vehicle, but Woo makes the use of the actor’s good looks and muscles. An opening OTT sequence sees Cruise climbing a cliff-face for fun. The slower moments appeal because Woo films Tom Cruise as if he is starring in a music video rather than a film. It is cheap entertainment, but rather irritatingly it works. The final showdown is as excellent as we expect from John Woo. It is explosive, features a gripping car chase and the final punch-up between Hunt and Ambrose is beautifully choreographed. It delivers as a laid-back beat-em-up movie and out of all of the Mission Impossibles, this is the one you can watch without properly tuning in.

Final Verdict: A fun, simple action movie. It is just a shame that John Woo used the Mission Impossible franchise to tell it.