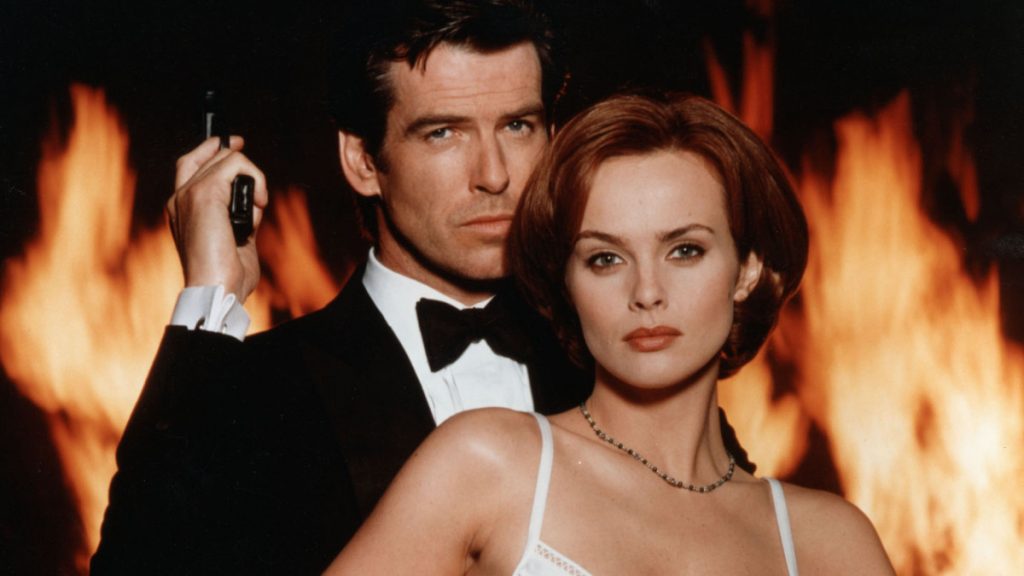 Timothy Dalton’s reign as Bond comes to an abrupt end, sadly short-lived, and we enter the era of Pierce Brosnan. Before I begin the next four reviews of the subsequent Brosnan movies, I feel compelled to offer some context and personal feelings on this chapter in Bond history. Pierce Brosnan has become known as the point where Bond became a little too silly and futuristic. While Brosnan plays 007 straight-faced, although not as broody as Dalton’s interpretation, the premises for each film do waver a little too far into the realm of nonsense. This is especially apparent with Die Another Day. Bond also feels a little conformist here, coming across as a larger than life action, but an action movie all the same, only personified by some one-liners and a range of gadgets, attached to cool cars. In Bond’s defence, this is mainly due to other action movies tailoring their style on Bond, rather than Bond playing it safe. Personally, I am going to ignore this side of things. Pierce Brosnan was the actor I discovered Bond with and history has proven that your first Bond is usually the Bond you prefer. Therefore, while Brosnan isn’t my favourite actor to play Bond, the explosive, pun-ridden script is how I feel Bond should actually be.

Pierce Brosnan’s movies usually involves the spy going up against an unstoppable piece of technology that has fallen into the hands of a bad guy. Here it is a Goldeneye satellite and ever since that first scene, where it all but wipes out a military base with an EMP blast, it is a name to be feared. Campbell preys on the very real fear that terrorists are only one technological advance from wiping us all out. As a result, this movie works as a piece of fiction, depicting the government saving us from such a threat. Brosnan’s Bond is less an undercover agent, but more of a one-man army, preferring to drive a tank after his enemies, rather than stealthily work out what they are up to. Does this take some of the intelligence out of the franchise? Yes. But what we do get is some terrific action sequences. Other than the aforementioned tank chase through Russia (stupid as hell, but god, was it fun!), there is one of the greatest one-on-one shoot-outs in Bond’s franchise on a satellite and one fight that is a cross between a punch-up and a sex scene. Goldeneye is packed full of moments that will grab you and having you laughing long after the movie has closed. It feels like more budget has gone into this movie and while that does remove some of the grittiness from the proceedings, this is a fantastic popcorn flick.

Goldeneye also works as a bit of a reboot. Namely the characters back in MI6 get a bit more depth. No one remembers Caroline Bliss taking over from Lois Maxwell on Moneypenny duties, but Samantha Bond brings the supporting character to the forefront of the game. She makes Bond quip for quip and while she still longs for the smooth-talking hero, she is smart enough to realise that it is never going to happen. Their chemistry feels slightly colder. A subtle change, but it means that Moneypenny has developed as a character, which makes the universe of Bond feel a little bit more important. Better is the arrival of a female M, Judi Dench pretty much dominating the role. Bernard Lee finally passes on the role to someone worthy and memorable. Dench’s performance, especially her breaking down of Bond in her office, made the character become much more than a necessary narrative device, but a vital character to each movie. It also helps that Bond now has a worthy female character, and not just some woman shoe-horned into the plot to add to the male fantasy.

Maybe the thing I like best about Goldeneye is the formula. While its flaws come from the fact it never pushes itself to be more than another outing with 007, it is refreshing to see such a new movie, feel familiar. While Moore clung to structure like a lifeline, Brosnan’s movies build upon it. It’s all there: the opening sequence involving a breath-taking stunt, the plan to take over the world and the same pacing and speed. Yet, Campbell plays with it. The henchwoman is an exaggeration of the sexual ferocity of most of Bond’s female nemesis, the major villain involves a twist that ups the personal stakes to the finale and Bond’s cool nature is questioned. “Does taking refuge in the arms of all those willing women help you forget those you couldn’t protect?” Goldeneye might be fun over substance, but I don’t think that is a bad thing.

Final Verdict: Yes, we are getting back into the zone of camp, but Martin Campbell balances it well, making Goldeneye one of the most sure-footed Bonds in a while.