Arc The Lad – Twilight Of The Spirits: The Review

Developers: Cattle Call
Publishers: Sony Computer Entertainment
Plot: The world is split into two divisions, the humans and the Deimos, monstrous entities not unlike demons. Human Kharg has no idea he has a half-brother Deimos, Darc, and the Deimos aren’t as evil as the world makes them out to be.

Most of you have probably never heard of this game. 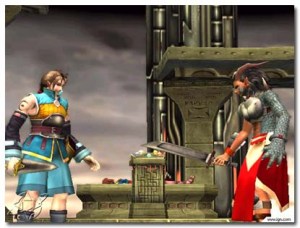 The easiest way to describe Arc: Twilight of the Spirits is a rip-off to the Final Fantasy series. It has the same tone and style, a RPG set in a fantasy world. However, being someone who has never truly dived into the Final Fantasy world, a stand-alone B-version of the genre, seemed like a sensible way for me to try and understand the hype. And, in all honesty, I loved this game. The reviews surrounding this game at the time made it out to be a poor man’s version of the famous Final Fantasy and I guess that must have been the majority decision, because it disappeared off the face of the earth a few years later, but personally, Arc the Lad hooked me from beginning to the end. I won’t bother summarising the story, because it is so vast that there is no way I could condense it into a single review, but I appreciated being able to throw myself into this rich and detailed universe. I love how it becomes this massive fantasy epic, stretching through a massive cast of characters. The first chunk of the game starts fairly tame, throwing you into the controls of Kharg, but it isn’t long before you end up heading over to the perspective of his half-brother, member of the Deimos species, Darc. You jump back and forth between the two groups, which is interesting, because you become attached to these characters, even though they don’t necessarily blend together. Fan favourite, massive werewolf-like, Volk, is very easy to like, but at the same time, he is responsible for the death of other likeable character, Paulette, meaning that one of them is likely to kill the other by the end of the game. It makes the story unpredictable and engaging, so if you embrace the events of the game, as I did, then it makes for a very entertaining story.

Sadly, it is a slow-burner and not for everyone. The gameplay is so RPG 101, these days you can probably download some apps to help you make a similar game yourself. The battles are a turn-based variety, so you have to use tactics and timing to win the fight, a little like something out of a Pokemon game, but a little more complicated. To give you an idea of how slow this game is, there isn’t actually a pause button, because there is never any moment in the game, where something will happen without you consciously triggering it. I am not saying this is a bad style of gameplay, because these features are a conscious effort by the developers, but it means that it is likely to only appeal to the patient. Even I get frustrated with the simple system and, at times, it was only a powerful story that kept me hooked on the game. The game is also very bloated with small fights to help you level up your characters, meaning that, after a while, the slow style of fighting, might end up driving you insane with repetition.

Levelling up is also an occasional problem. It is fun upgrading your favourite, usually the aforementioned Volk, to a point where everything in his path is mincemeat, but this means that you end up accidentally neglecting the supporting cast. This means that your unit often becomes a handful of super-soldiers, weighed down by red shirts of your own making. Too many fights have taken too many attempts, because my best fighter was purposefully targeted by every enemy on the field, promptly being killed and allowing the bad guys to merrily pick off the useless characters at their own leisure. When you are going to lose a fight, it is even more frustrating, because you can tell you are doomed three turns before it happens, a little like losing a game of Monopoly. It is hard to backtrack this game too, so when you reach a point where you realise your team is not strong enough to continue, it is tough luck, because you are stuck it that situation. To avoid this, you must spend longer in the boring parts of the game, making sure everyone on your team is fighting fit for the next stage of the game.

Final Verdict: I love this game, but that is mainly for story reasons, the RPG elements of the game a little too flawed and slow to really make Arc anything more than a mildly enjoyable time-waster.