Sin City 2 grabs you right from the start, almost as if it didnât spend the last nine years struggling to get together this long anticipated sequel. A short story where Marv, man of the match last time around, hunts down some scumbags in the dark alleyways of Sin City. It has little to do with the overall plot, just gives us the bloody violence and dark noir that we have been craving for so long now. It is a brutal slap in the face, which snaps you out of your comfort zone and throws you right back into the action.

The stories that do matter are just as good. Joseph Gordon Levitt takes over from Rourke, a cocky gambler, who strolls into Sin City to take part in a high stakes poker game against Senator Roark. Gordon Levitt is the new character on the block and he steps into the style and tone, as easily as the veterans. For those getting fed up with Dwight and Marv taking bullet after bullet, Levittâs more vulnerable hero makes a much easier character to get behind. Interspersed between Levittâs story is Dwight McCarthy, this time played by Brolin (this is explained better in the comics, because Clive Owen refused to pop up for a cameo, which would have made this plot point easier to understand). A Dame To Kill For is the main attraction here, the biggest chunk of narrative. Eva Greenâs Ava Lord (man of the match this time around), breezes into Dwightâs life and sends his whole life into turmoil. This is the best story here, as it features all of the quirks we love about Sin City. Dangerous women, men that look like mountains and a well plotted story that races along at a breakneck speed. Maybe the only problem here is that so long is spent on Dwightâs chapter that Joseph Gordon Levitt and Jessica Alba are left with less to do. This brings us to the final story, where Jessica Albaâs Nancy avenges Hartiganâs death in the last film. It is nice to have a female narrator, a much needed win for the Sin City ladies, and Jessica Alba gives one of her strongest performances yet, as she falls into alcohol-fuelled obsession with her nemesis. The action pieces get moving and no one is too sure where the movie is going to end up.

Letâs get the obvious point out of the way. No, it doesnât quite trump the original. The movie isnât as cleverly paced as the first one (especially Albaâs closing notes), and certain beats frustrate. Jamie Chung is a poor substitution for Devon Aoki and while the two laugh-out-loud cameos are great in the cinema, you will reflect two days later on how they partially cheapen the overall effect. However, the important benefits are still ever present. The dialogue is terrific, providing even meatier lines for the cast to bite into. The direction is a little tighter than last time too, as Rodriguez and Miller improve their old tricks and throw some new ones into the mix. For example, the silhouette frames used a handful of times in the first, now get faded into the other shots. Certain camera angles are breath-taking. It helps make Sin City a bigger contender for an entry in the classics genre, and more than a silly sexploitation flick. It doesnât ever feel too artistic though and still provides a great escape for all of the cult fans like myself that just want to see more from all of their favourite characters. 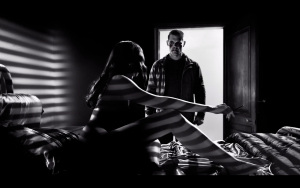 I enjoyed how the Sin City universe was built upon as well. This is, after all, a comic book movie, and it does have a massive amount of material beneath the surface. Manute is a stronger character this time around, rather than being the âmiddle act baddieâ from the first film. As much as Michael Clarke Duncan provided the camp henchman figure well, Haysbert is just that little bit stronger, especially during one scene where we realise he is just as captivated by Ava Lord, as all of the other schmucks in this film. But itâs not all character development: we finally get to see Manute go up against Sin Cityâs other muscleman, Marv. Other beats of clever plotting are the twins, Goldie and Wendy, showing up for a cameo. It brings nothing to the plot, but it is nice seeing them together and references how Sin City is a kaleidoscope of stories and characters. Sure, when you have Bruce Willis hanging around, it does make you want to watch the first one again, but Sin City 2 really does make this franchise feel more like a new series, rather than an one-trick pony.

Final Verdict: I waited nine years for this movie to come out. Sin City 2 was worth every second of that wait.