Alpha Dog has the opportunity to be a pretty extraordinary piece of cinema. It is based on a pretty grim true story where the younger brother of a violent gangster is kidnapped by some rookie rivals. Both the hostage and the hostage-takers are little more than dumb kids, so they end up ferrying the brother through a bunch of house parties, trying to disguise the fact that they are taking part in a kidnapping. However, as the façade crumbles apart, Johnny Truelove (played well by Hirsh, who is carving out a niche as the foolish yet nasty bloke), realises that he is facing severe legal actions, which forces him to do the impossible. 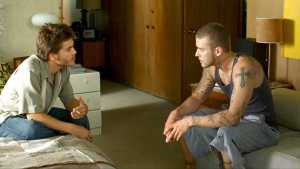 Alpha Dog’s main problem is that it has no idea what film it wants to be. Its running time sees it jump from tone to tone, style to style, and I left this movie unsure of which audience it was made for. This is a pretty compelling true story and for a lot of the time, the movie plays it straight. We revel in the grimness of it all with interviews from the characters after the incident and lengthy scenes of dialogue where the characters come to terms with what they have just done. This is all fine, as we expect this kind of material when we hear about the premise. However, the middle act, which lasts for most of this movie’s running time, consists of American house parties, which are played very light. We forget that the bad guys are criminals and you could be fooled into thinking you are watching a coming of age teen movie, where Anton Yelchin’s hostage is taken from his boring life and thrown into the gangster lifestyle where it ends up having sex with Amanda Seyfried and Amber Heard in a swimming pool. Again, these scenes are done well, but they stick out like a sore thumb when you look at this movie as a whole. When I first watched this movie at the age of 17, I fell into a small category of young people who didn’t mind weighty true story movies, but also spent his time watching comedies about teens losing their virginity. While even I was thrown by the fact Alpha Dog juggles both, I still enjoyed most of this movie. However, I can see people who wanted a true crime story disappointed at the fact that the middle act consists of drunk, annoying teenagers. And those kids that were having fun with the house party moments won’t like the grim conclusion. I am sure they would be on board for the heart-breaking climax where… no, we’ll come back to that. That scene deserves its own paragraph in this review. But the fans of the house party sequences won’t take to the slower ending that ties up all of the pieces. The true story is compelling enough to stick Alpha Dog out to the end, but it still feels like a shaky ending to a good story.

You end up looking past the bigger picture and focusing on the smaller beats of good film-making. Justin Timberlake is a revelation in this movie. We all knew the singer could hold his own in the acting world, but here he comes across as a man who has been acting for his entire career. He plays the middle man in the story; he isn’t behind the kidnapping, but helps babysit the hostage to help his mates out, unaware that he is making himself one of the biggest culprits in the police investigation. He handles the heavy emotional moments and he steals the show. And this is a movie with Bruce Willis (coasts through it to pick up a pay-check), and Sharon Stone (OK, but directed poorly). Other nice touches to look out for are the clever direction when the film decides to play serious. The editing is good here, especially a grainy home video of the young hostage as a baby opening the movie. The film does a nice job of balancing quite a large cast without making the finer details go over our heads. This movie earns a couple of re-watches, especially when you realise there are things you missed the first time around (wait, Olivia Wilde and Amber Heard are in this movie!)

Back to that heart-breaking scene. Alpha Dog might be a shaky movie that clings onto success, but its biggest strength comes into this one sequence. We could argue that Cassavetes had this scene in mind from the start, probably the biggest draw at making this movie, and a lot of the film’s flaws come from the fact he has to build a feature film around it. However, this is worth it, because when you sit down and watch it, it is gut-wrenchingly soul-destroying. I don’t want to spoil it at all, but being a true story, even those who cannot remember the front page news will have a vague idea of how this all ends. It plays with the inevitability of it all, dragging out this one scene as long as it can. You are glued to your screens, committed until the moment plays out, but not really wanting to see where this roller-coaster journey stops.

Final Verdict: Messy, but good enough in places to be recommended, even if it is just to be aware of this horrific yet compelling true story.