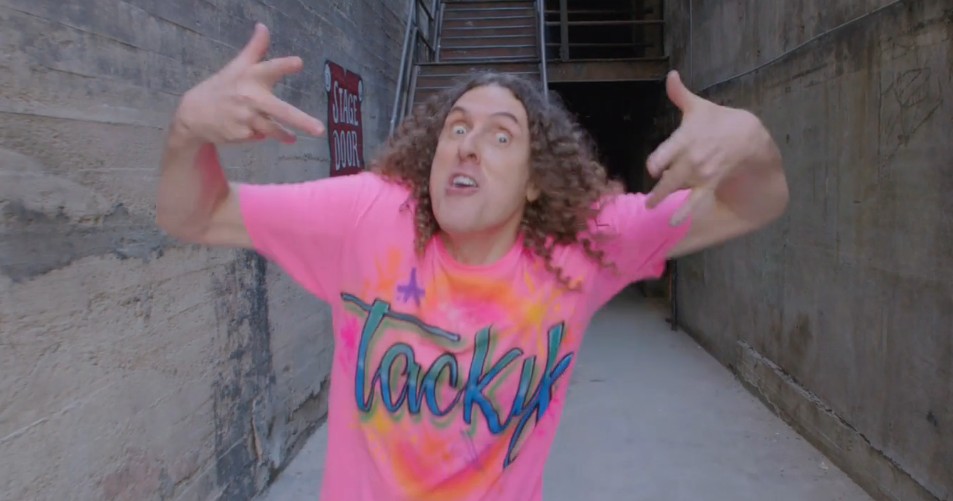 Who’s heard the new Weird Al Yankovic song Tacky? It is a hilarious parody of Pharrell’s Happy, where he lists off all of the personality traits that make you a tacky person. It is witty and fun. Well, until you stumble across one of the traits that sums up something you do. Then you have to analyse your life and realise that your selfie with dead people collection might need to be re-evaluated. I thought it might be fun to see how tacky all of my readers are (and my blog, by coincidence), so I made a test. Count up how many of the lyrics describe something you do well and then see what score you have got at the bottom. Remember when going over the options, ‘If you’re okay with that, then, you might just be tacky, too.’ That means, if you don’t do it yourself, but don’t see the problem, then you still have to add it to the tacky column.

Owning 43 Bumper Stickers and a YOLO license plate
Bringing along a coupon book whenever you’re on a date
Practicing twerking moves in line at the DMV
Taking the whole bowl of restaurant mints. (Hey, it said they’re free)

Getting drunk at the bank and taking off your shirt, at least
Live-tweet a funeral, take selfies with the deceased
If you’re hypothetically bitten by a zombie, not telling the other survivors

0: Stuck-up – Not one tacky characteristic! Come on, dude. Lighten up a little. Take your shirt off at a bank or something.

1 – 5: Respectable – OK, so you have a few bad habits, but doesn’t everyone. If anything it is a talking point.

6 – 10: Someone to avoid – People get along with you, but don’t be surprised if they occasionally cross the street when they see you coming or pretend they didn’t see you at the bar.

11 – 15: Unbearable – You’re the kind of person that no one wants to hang out with. You are constantly shoving your tackiness into people’s face. Dude, get a life.

16+ TACKY – Hey, good news. Al Yankovic made a song about you, so you are famous. Now you just have to try and live with yourself.

I made the ones that I am guilty of in bold for those interested. I scored 4 out of 19, making me actually a lot better than I thought I was. I am interested in what you scored, so post in the comments below.