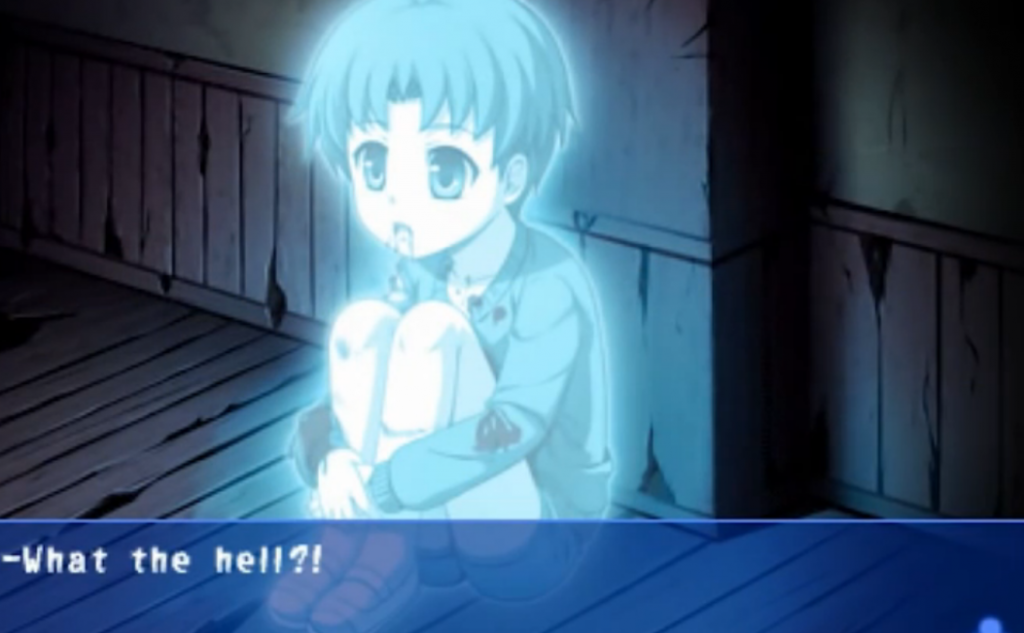 Chapter Two begins with a touching moment where Naomi and Seiko, the leads from the first chapter, before the nightmare began. It offers nothing more to the story than to show the two characters spending some time hanging out and talking about their ‘child-bearing hips’. It is funny, pleasant and downright upsetting, seeing as we saw how the characters’ journey ended up in the last chapter.

With that done and dusted, we are thrown straight back into the nightmare. This time we are handed over to three characters to tackle. Mrs. Yui was the schoolteacher present during the earthquake that sent them to this other plain of dimension. She is an interesting person to explore, being the only adult in the group. It brings a dynamic to this chapter and seeing as this game looks like it will feature a lot of stopping and starting, this could help distinguish each chapter. The two students are Ayumi, the girl who was playing the prank on the other kids at the start, and Yoshiki, the school bad boy, always moments from being kicked out. Yoshiki is cool in his own way; the stuck-up kid who is untouchable, but as the nightmare descends, he begins to lose control. It is also hinted that he has a soft spot for class rep, Ayumi; not a romantic card of sorts, but a respect that he doesn’t show the other characters. This hurts him, especially when Ayumi admits she rather be stuck with the other students than him. It makes him an intriguing anti-hero to get behind. Ayumi, on the other hand, was a bit of a disappointment. In last episode’s intro, she was the main character, the one in the know, with pages of dialogue to get through. She is a weak character, sobbing and becoming a narrative device to look out for, rather than a strong person in her own right. Her weeping and rants will probably frustrate you, making it difficult to quite understand Yoshiki’s care for her.

Chapter Two’s greatest success is getting good right from the start. Chapter One suffered from a slower start and lots of backstory to get through, but Chapter Two surprises you by bringing in the shocks and twists in early. It is the fury of the victim’s ghosts that gets to you. You felt sorry for them in Chapter One, but as the story expands here, you learn that they are your biggest problem. Their endless suffering has made their violent and vengeful; bringing in poor children to their realm for meaningless deaths. Your group decides to try and appease the ghosts (another strength of this episode is the purpose in the characters), by bringing an admission of guilt from the serial killer who slaughtered them. Ah yes, as well as ghosts, the serial killer is trapped in this world himself. He rears his ugly head in one terrifying moment that comes out of nowhere. It is one of the shocks that stays with you, making Corpse Party such a cult game.

The dots are also connected here. Chapter Two feeds into the first Chapter cleverly and I am beginning to sense that this style will be improved on, as the game gets more plains of existence to play with. Again, you are playing in the same map, which gives the player goose-bumps when your characters stumble across the resting place of one of the previous playable characters, without even realising the relevance of where they are standing. It adds to the eeriness of the game, always crawling in the back of your mind. You are always potentially moments for the next WTF moment. And when they come, you realise the brilliance of this game. There is even some action here. A ghost stalks you throughout this level, suddenly appearing and chasing you down. It is simple action, merely an occasional chase scene, but it is enough to keep the mid-point of the chapter fun and is frightening enough to put a spring in your step.

There are moments that stop Corpse Party from being too good. The format is still trapped by the side-scrolling style. The false endings are also a little gruesome. When you die in the game, there is always a final cut-scene where you watch your character’s final moments. It is a little much for me. I guess this is a question of taste rather than quality, but this is where I join the line at horror. The inevitability of these scenes, coupled with the rasping choking of the students, makes me distance myself from the game. At the very least, it gives me drive to stop killing myself off. It makes dying mean something. The other problem is that occasionally there would be a needless panty shot. One scene sees Ayumi breaking down and her panties are clearly visible from under the skirt. The artist put a lot of time into crafting that one particular part of the body. Why? It is needless, takes away from the horror of the scene and, in all honesty, a little creepy. Little beats like that stop anyone from taking Corpse Party as seriously as it could be.

Final Verdict: The shocks and scares find a new level, as the mystery thickens. While the characters aren’t as fun to play, the story is better here, making Chapter Two an improvement on the last.