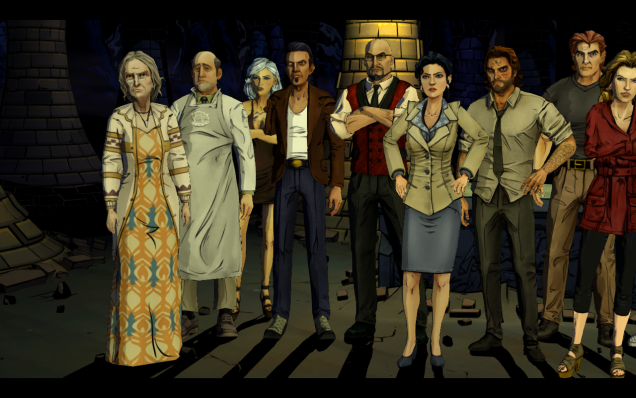 The Wolf Among Us – Cry Wolf: The Review

The Wolf Among Us is my favourite game that Telltale Games have released. While the Walking Dead Game has more stand-alone moments of brilliance (no one has quite recovered from the last finale Telltale Games inflicted upon us), the Wolf Among Us is, in my opinion, the overall success. It is deeper than survival of the fittest; the Wolf Among Us is a great example of story-telling at its best. It covers corruption, morality and justice, all encapsulated in these terrific set of characters. While the Walking Dead is guilty of killing off its characters too early (it comes with the genre), the Wolf Among Us develops everyone until they are finished with them. I love the style, the characterisation, the atmosphere… Please tell me that we are not done with this universe just yet.

Cry Wolf grabs you from the moment it kicks off. The first thing you do is find out who actually murdered Faith and Lily. The second thing you do is get caught in a massive punch-up with the Tweedles, Georgie Porgie and the Jersey Devil. The Wolf Among Us really does want to kick off the finale with a jolt of electricity. The action continues on at that level of breakneck speed, as several characters get their turn in the spotlight. The nastier characters are given their moment of redemption and one background character steps up to reveal her connection with everything. Then Bigby turns his attention to the remaining villains. Ever since she waltzed onto the screen, Bloody Mary has promised us the mother of all battles and she does not disappoint. This could be the most exciting, terrifying battle Telltale Game have ever pulled off, as you find yourself fighting for your life. The game really does, not only Bloody Mary, but also Bigby Wolf justice, as the two characters, arguably the two strongest titans of the Fable universe, knock the living shit out of each other. That one sequence will be enough to send you away, completely satisfied.

But then something unexpected happens. The game, finished with giving you some terrific action set-pieces, slows right down to finish off the story. As the Crooked Man confronts his trial, you cannot help but consider that this is a strangely fitting conclusion, given the subject. This story has been about your character trying to balance the underdog soldier character with the more reserved, democratic position. Solving the problems of Fabletown with one almighty battle would have undermined the message of the story. In fact, as a gamer, we are almost totally removed from the action. This part of the game is all about laying out the choices we have made throughout the game and realising just what sort of figure we have portrayed throughout the five episode run. This is Telltale’s strong point, as we see everyone’s opinion of us and how our connections with the supporting cast will either aid us or screw you over. You really do feel the weight of Fabletown on your shoulders and as the story comes to its shattering conclusion, you cannot help but appreciate the genius of Telltale Games.

The mystery element is strong here too. The last thing we wanted was for a lacklustre answer to the riddle of the entire story. Thankfully, there are enough twists and turns remaining to keep you satisfied with the finale. I enjoyed the fact that the game gives you one chance to guess the killer’s identity, rather than simply telling you. As I said, it is right at the start, so before playing, sort out your theories before beginning; don’t worry, it is a guessable answer if you have been paying attention. The reveal at the start doesn’t ruin the fun though, as the rest of the episode sorts out the ‘hows’ and ‘whys’. The epilogue of the game features a nice chat between two characters as the mystery gets fully revealed, tying up every loose end. Well, not every loose end… As the game fades to a close, there is one more sucker punch which demands that the Wolf Among Us get renewed for a second season. Sooner rather than later.

Final Verdict: After a truly amazing five episode ride, the Wolf Among Us hits us with a truly outstanding ending. Carefully constructed, powerfully delivered and endlessly entertaining.