Somewhere buried in this story is a good idea. After 9/11, terrorists became a very real threat. The concept that they could wipe out that many lives, fuelled by a hate for Western civilisation is terrifying. There is something infinitely creepy about extremists from any religion or cause. Therefore, it seems a logical choice to make a movie, where terrorism could be solved through the medium of sport, without bloodshed. With some intelligence, this story could have become a very intelligent, yet entertaining political thriller with enough action to be a crowd-pleaser. However, sadly, the script seems to have been written by someone with the intelligence of an abandoned plate of mash potato.

The problem that hits you about half an hour in, is that there is no wider universe to this story. We are told about the history of Futuresport and the terrorist organisation is explained, but we have little clue to the relevance of everything. Apparently Futuresport is the world’s biggest thing, but there only really seems to be one anchor-woman covering the whole sport. The stupidest point of this movie is when the main character, losing his celebrity status quite drastically, somehow is able to bet Hawaii in a Futuresport game with terrorists. The movie mentions that not even the news reporter helping him convey this message to the world knows what he is about to say. How has he got the authority to bet an entire state with terrorists? Is there no such thing as a government in this version of our future? Apparently, America gives up and does bargain with terrorists in the future. Also, because the media is losing interest in him at this point in the film, does that mean that anyone, at the very least Futuresport players, have the power to bet large portions of America with criminals at the drop of a hat? On a single game, where people are allowed to knock players unconscious with a hockey club and only get sent off the court for two minutes. The terrorists only agree to the match, because they are prepared to cheat their way to victory, which seems a lot easier than trying more of their terrible assassination attempts. I also have to question the idea that the good guys believe that the terrorists will just stop killing people if they lose a game of sport, especially when the counter-point is that the terrorists are genuinely prepared to give up their cause if their team fails. I don’t really see any Al Qaeda members giving up the Muslim thing, because they didn’t guess a coin toss correctly.

However, there are gaps in logic, which I understand from B-Movies like Futuresport, to narrative details that just aren’t explained. They don’t even try to make sense. This movie opens with a press conference that is ambushed by this terrorist organisation. The terrorist attack’s objective is to slaughter ‘the traitor’ and ‘the snoop’, meaning Tre Ramzey and the news reporter character. A scene later and we learn that their connection is that the two targets used to date, intriguing the audience and making us assume that before they broke up, they were involved with the bad guys in some format. However, this is never explained. The assassination attempt fails and the movie never brings up why the murders had to be of those two specific people (it seems so absurd that I might have missed a plot point, so anyone in the comments that could clear this up would be appreciated). Sure, Ramzey is a big sports star and his death would be a major news story, but why Vanessa Williams’ reporter character? Also, the words ‘traitor’ and ‘snoop’ imply a deeper meaning. But, even worse than never being brought up, no one seems to care. When the terrorists demand that these two targets be handed over to them, the police or government never bother investigating why. The characters have to supply their own security. Even they take the fact that they are wanted dead by this terrorist cell very lightly. The entire affair is set up to introduce the bad guys and get the movie rolling, but without explanation, it is unforgivably stupid. 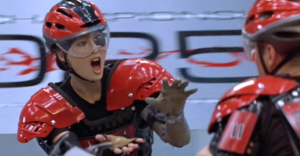 Unforgivable? That brings me onto my final point and the flaw that really made Futuresport ‘unforgivable’ for me. Despite creating their own sport and putting a lot of time into the celebrity status commentary, Futuresport appears to have no agenda of being a sports movie. It is much more comfortable being a Sci-Fi action in the veins of Demolition Man or Robocop. Sure, it has the whole sports movie vibe for the build-up point of the film: there’s a big game to be won, the main character struggles to work as a team, the coach character is distant and fatherly. But, when the climax kicks in, Dickersen is far more interested in the team having a punch-up with the world’s worst terrorists. He tries to make the sport relevant by having the team fight using their experience as athletes, but it doesn’t really work. They use their hover-boards, yes, but that is to get a surprise ambush at the start of the battle, which lasts a single punch. The only other sports-related thing they use in the fight is the equipment (the ball and their batons), but that elevates them to the status of brawling with whatever they can get their hands on, rather than a sportsman to fear. The actual game, Futuresport, doesn’t seem to have too much sway on the movie’s action. The final game, after the punch-up, feels tacked on and hasn’t got the tension anymore. It is hard to care, because I don’t think the director ever did.

I have run out of time for this review, but there are still a few things to complain about. I will reel them off quickly. The soundtrack is laughably out of place, the direction is so by-the-numbers, it is border-line dull, and there isn’t enough budget to truly depict the sense of a futuristic city. I will give the actors their due though, because they made this film bearable. Dean Cain and Vanessa Williams rise above a generic and boring script and Wesley Snipes is fantastically fun to watch.

Final Verdict: The story makes little to no sense, which drags down what could have been a fun idea. It doesn’t help that the director conveys little creativity or passion.