Scream is one of those horror movies, praised as an instant classic. It is known for reverting the horror genre, which had become very stale. Horror had been seen as a lesser genre, since the greats like Halloween and Psycho had come to a close and all the modern cinema saw were awful sequels and knock-off copies. For bringing this important genre back to the forefront of cinema means that Scream always has a place in my heart, but for the most part, I think Scream is a very flawed movie. I have seen it twice; the first time I hated it and while I understood Craven’s vision better on a repeat viewing, it still gets dragged down by flaws that makes me clueless as to how I have seen nothing lower than a five star review, concerning this movie. 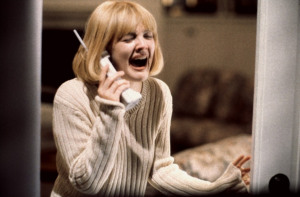 I don’t even think Wes Craven is a bad director. In fact, there are scenes in this very movie that screams brilliance. I am still among the school of people that think the opening scene of this movie is exactly how a horror should be. The tension is handled perfect, it is unpredictable to anyone heading into this film spoiler-free and it doesn’t cut away. When a character dies, we see the knife go right into that person, not bothering to censor in the slightest. Even now, in a society brought up on gore porn spectacles like Saw and the Human Centipede, that little stabbing shot is shocking. It proves that it is the subtle levels of gore that work. The only thing that I have to fault that initial scene on is that it is clearly the peak of the movie, meaning that the rest of it never hits that same level of tension and suspense. In simple terms, Craven showed his hand too early.

This puts the killer on the back foot straight from the off. His reveal is brilliantly done, starting with the creepy phone call and building up when we see the black cloak and skull mask, gliding around the living room, like a ghostly demon. However, that reveal is in the first scene, so from that point onwards, the entire suspense side of things decreases greatly. Craven doesn’t even give us a break from the killer; his face crops up every ten minutes. When we cover the plot point that the killer is evading the cops, because the outfit can be purchased anywhere and everywhere, the local kids start wearing the costume for fun, meaning that we have an endless supply of red herrings and false jumps. When some of the characters could do with some developing, you begin to wish that Craven would let the serial killer simmer in the background for a moment. It also hurts that the killer is so easily taken out; we see him getting punched and kicked over by almost every one of his victims. His only edge is that knife, which while moderately menacing, makes him seem too normal. He is no ghostly immortal Mike Myers, by any stretch of the imagination. The killer’s true identity is also pretty useless. The twist and message behind the movie is that there doesn’t always have to be a motive, but that just frustrated me, as there were far better options on the table here. Ghostface has the iconic look, but over than that, he doesn’t do anything for me as a horror movie monster.

The acting is a mixed bag. The girls are on good form with Neve Campbell, Drew Barrymore and Courtney Cox providing decent performances. Campbell is stuck with the helpless victim act, but the movie is wise enough to give her something meaty to do at the end. The film constantly compares her to Jaime Lee Curtis, but by the end, Neve Campbell leaves as a horror movie starlet herself. Rose McGowan isn’t as effective, held back with the job of providing endless exposition. She tries to make something of her character, but it was hard to buy the best friend act, when she had to follow up her comforting by reeling off Sidney’s traumatic past. What kind of friend reminds a grieving person about her dead mother’s rape moments after an attempt is made on her life? The men are hardly worth mentioning. Skeet Ulrich is a second-hand Johnny Depp stand-in, right down to the puppy dog eyes and curly hair. Matthew Lillard takes over-acting to a whole new level. Whenever he is on screen, I cannot take anything seriously. Most of the other characters are red shirts, which is a shame, because some of them are almost looking like interesting figures. A blossoming romance is introduced to the plot, but stomped out, because the writers wanted to create someone else that could get stabbed in the back, at a moment’s notice. 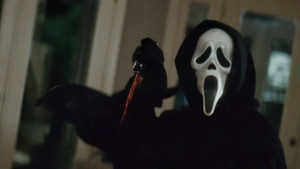 But none of that matters to Scream’s cult following. Wes Craven isn’t making ‘just another horror’, he is exploring the genre and satirising it. It is no secret that this is a border-line parody, with Jamie Kennedy’s character breaking into the fourth wall to explain the horror movie rules. We can’t go through a scene without one other horror movie being referenced in some form. I don’t mind all of this, but this is a case of a movie clinging to a B-Movie storyline and claiming that this is part of the joke. I don’t think you can proudly be a dumb horror movie, without putting on some kind of original spark to it. But anytime I bring this argument up, I am told that I do not get the point. My criticism is always categorised as invalid. Perhaps, I have missed the message here. I understand that I have jumped onto the Scream bandwagon late in the day, taking the cinema context from the movie. I have not experienced the lack in quality horrors before Scream came along, so I cannot comment on how effectively Wes Craven saved the day. However, looking at this movie from my point of view, I cannot tell it apart from any other bad slasher movie we get these days. Scream may be a classic, but to me, it is just another failed horror with too many sequels.

Final Verdict: Aside from some moments of horror brilliance, Scream revels too long in its B Movie nature and lack of true story.