Director: M. Night Shyamalan
Cast: Bruce Willis, Samuel L. Jackson, Robin Wright Penn
Plot: David Dunn (Willis) emerges from a devastating train crash as the only survivor and begins to suspect that there is more to him than meets the eye.

I have never been a massive fan of M. Night Shyamalan. The irritating thing is that he is actually a fairly good director, as we can see from the truly masterful ‘Sixth Sense’. He has a way of holding a shot for a long time and letting the actors do their thing. He was the man who showed the world that Bruce Willis was more impressive than just being your everyday American action hero. However, at the same time, he has a way of shooting his own movies in the foot.

Unbreakable is known as one of his better films, although in my eyes, it is just as bad as many of Shyamalan’s other films. It is the potential that frustrates me. Unbreakable is essentially the Dark Knight trilogy ten years early, taking the concept of the superhero and making it feel grounded and realistic. We are given a character, who is easy to relate to. David Dunn is just a father, trying to hold a family together, especially a son who is acting more disturbed each day. On the other hand, he isn’t a holier-than-thou guy, giving us enough dark material to be interested as well as invested in the character. The very first scene sees him slip his wedding ring off of his finger, so he can try and pick up a girl on a train. His journey towards becoming a superhero is a realistic one and there are never any times where we need to make massive leaps of faith. I can totally see why this one has its fair amount of fans, but while all of the elements are in place to make a fantastic superhero movie, Unbreakable never goes that extra mile. 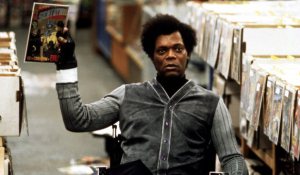 Let’s take the twist, for example (don’t worry, I won’t spoil it.) Seeing as M. Night likes his twists and often goes O.T.T with them, Unbreakable actually has a twist ending that works. It is game-changing, yet doesn’t flip the story totally on its head, like M. Night is prone to do, when he is given too much control over a project. Sadly, it is the timing of the twist that annoys me. The twist is the final thing we learn about the movie, so when we are suddenly given this exciting piece of information, the end credits appear and we never see where that line of narrative goes. If the twist happened in the middle of the story, or at least early enough to give us a decent conclusion to the story, then this movie could have been the stand-out superhero film of the decade. I often give credit to Batman or Spiderman for bringing back the superhero genre, but if M. Night had been a bit more careful with this movie, Unbreakable would have proudly held that title.

Basically, what we end up with is the origin story without a true villain to tie everything together. Imagine watching Spiderman but the movie ends as soon as he catches Uncle Ben’s killer. I said that I liked the long shots that allow the actors to revel in quieter moments, Bruce Willis once again showing how good an actor he has the potential to be. However, they do end up getting boring and we could even say that Willis starts to look like he is drifting through his performance, his silent, brooding figure beginning to look a little lifeless. The wheels of the machine begin to fall off and Unbreakable ends up unsteady on its feet and unsure of what it is doing.

Final Verdict: So much potential, but wasted. Unbreakable might be brilliant in places, but overall it is a missed opportunity for the superhero genre.