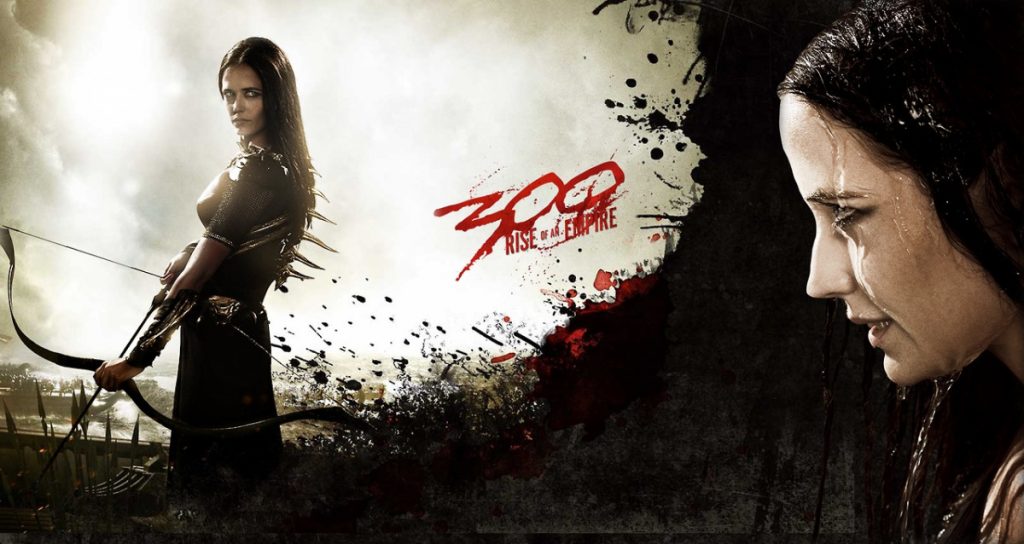 Director: Noam Murro
Cast: Eva Green, Sullivan Stapleton, Jack O’Connell, Lena Headey, Rodrigo Santiago
Plot: The Persians launch an assault on Greece, destroying everything in their path. Themistocles (Stapleton) believes their only hope is to unite Greece, but with the stubborn Spartans blinded by honour, it isn’t an easy task.

Warning: this film contains scenes of violence, sex and violent sex. This is pretty much an accurate synopsis in itself. 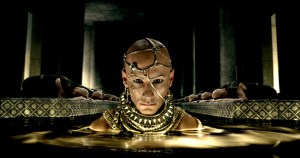 More? Very well. 300: Rise of an Empire is essentially a companion to the original 300, but the story zooms out to take a look at all of the outside factors of that story. Therefore, we begin the film, learning about the events that sent the Persians on this rampage across Greece. We are introduced to the two mourning sons of a dead King, a not-so glorious, Xerxes, and deadly, adopted daughter, Artemisia, who end up leading this assault. We then jump into the perspective of the Athenians and their side of the story, so the events of 300 play in the background. And finally, when King Leonidas ends up receiving an honourable death on the battlefield, we get to see what happened next and whether Xerxes accomplished his dream of conquering all of Greece. Therefore, this film acts as a prequel, a sidequel and a sequel, essentially expanding upon the original story. Or, if you are one of the more cynical viewers, this film is pretty much the producers looking for any excuse to continue making money off of this franchise.

Rise of an Empire’s problem is that we’ve done this all before. The idea of another 300 sounds good on paper, but truthfully, now the shock and originality factor is gone, it feels a little bit of a let-down. Everything is just a little less impressive than it was way back in 2006. Take Sullivan Stapleton. The actor doesn’t do anything wrong here and I can’t really bring myself to fault him in any way. I am actually pretty sure that he could be a better actor than Gerard Butler. But, Gerard Butler’s depiction of Leonidas is so iconic that Stapleton never matches him. He gets the fight moves, the heroic speeches and the space to be physically imposing, but no one asks him to be any more than another Leonidas, and it just doesn’t work. Also, there is no memorable dialogue in this movie. 300 was filled with amazing quotes, like the unforgettable ‘THIS IS SPARTA!’ and the just as pleasing ‘Spartans, what is your profession?’. There are endless quips. Here, the movie isn’t even trying, filling what is meant to be rousing speeches with forgettable, routine monologues about glory and freedom. However, then there are other times, when the movie is trying too hard. Jokes fall flat, a father and son relationship copied and pasted from the first movie never really lands emotionally and the best quotes are clearly trying to force another classic line. “You fight harder than you fuck!” drawls Eva Green’s Artemisia.

Maybe that was to be anticipated. No one came into this movie, expecting the sequel to top the ground-breaking original. No, the true flaw that weighs Rise of an Empire down is the pace. 300 works best played fast, throwing bloody kills after bloody kills, always upping the ante. In theory, it shouldn’t be too hard to redo 300, providing you understand the dynamics. Murro doesn’t seem to. The script lets the side down; there is simply too much story this time around. In order to create a plausible reason to have this sequel, Murro builds up an origin story for Xerxes, Themistocles and Artemisia, drowning the audience in far too much exposition. Lena Headey is cursed with the job of narrating, no one seeming to realise that the actress is far too good for this material. The action never really kicks off either. This time around, the battles are naval-based, sending waves of impressive ships after the tiny Athenian fleet. However, it turns out that sea-based battle scenes are too quick. I understand that 300 works best, when the speed is dialled up to the maximum, but when we realise that each fight is separated by a good ten minutes of more exposition, we begin to crave more. When 300 got to the Hot Gates, the action didn’t stop, until the end. Even with less impressive dialogue and a lack of originality, Rise of an Empire could have been forgiven, if it just kept to that formula. 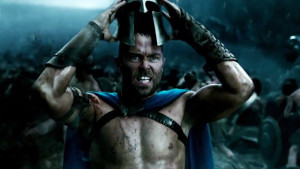 It’s not all bad news. The fight scenes are well done, almost as if Zack Snyder never stepped down as director. There is a great shot, where Themistocles rides a horse over collapsing ships, in order to get to the final fight with Artemisia. If you came for the terrific cinematography, frames ripped right from the pages of a comic book, Rise of an Empire does not disappoint. In many ways, this movie does exactly what it says on the tin and that might be the one factor that makes you look past the hastily-planned story. However, this film’s saving grace is easily Eva Green. Every time she is on screen, you could almost be forgiven for enjoying the movie. She understands the romanticism of 300 better than the director does, playing the despicable Artemisia as if she is a creature born from mythology. When the script fails, she conveys story with her facial features. The bitter jealously when her father gives her the cold shoulder on his death bed. The trace of disappointment when she believes she has killed her opponent, Themistocles. If you want to see Eva Green play a terrific villain, then Rise of an Empire might be worth a watch. Otherwise, it might be best to save your pennies for Captain America.

Final Verdict: OK, but not quite good enough to explain why a 300 sequel was even needed.