The Fast and Furious And The Tokyo Drift: The Review

Tokyo Drift has not been looked upon kindly by critics in the past. It is easily the most forgettable of all of the Fast and Furious films, and seeing as it features none of the original actors, it often sticks out like a sore thumb when compared against the franchise as a whole. However, despite public opinion, Tokyo Drift isn’t a total disaster.

The thing with Tokyo Drift is that most of its flaws are actually the trademarks we have come to expect from a film featuring little more than gorgeous cars, half-naked women and unbelievable set-pieces. I find it unfair, when people criticise this film with the same flaws that the two previous movies also have. Take the flimsy acting. Lucas Black is a pretty awful actor, but then again, Paul Walker (R.I.P) hardly was destined for any OSCARs. The truth is, despite the only actor showing any promise here being Sung Kang, no one really cares. We didn’t come here for any powerhouse performances. The plot is absolutely trivial. Boswell instantly rubs everyone up the wrong way (predictably over a girl), and somehow gets involved annoying the local Yakuza. Also, people got annoyed how the Yakuza were dragged into the plot needlessly, but the first one had the Asian triads and the second one was pretty much all about Columbian drug rings. Sure, Tokyo Drift trips up a lot of the time, but it is never anything that the other films haven’t tripped up on before.

What we do get is pure, unfiltered car action. If you loved the car racing sequences from the other films, then Tokyo Drift might just be your ideal Friday night movie. While in the first two, underground racing seemed like an add-on, so the movie could get together its interesting plot, this film actually revolves almost entirely around it. This is probably the best film in the franchise so far, when it comes to actual racing. There is more of it, and the sequences are better than they have ever been before. The drifting side of things shakes up a tired idea. We get the underground of Tokyo, looking much more beautiful and stylish than America’s setting ever did. The finale on the mountain is breath-taking and climatic, sure to have everyone at the edge of their seat. While most of the movie kind of feels a little underwhelming, the final ten minutes are at an explosive best, miles more impressive than anything the second movie could hope to come up with. 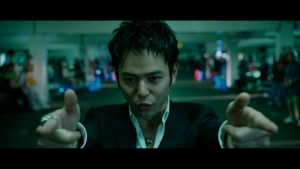 I appreciate the idea to start from scratch. Paul Walker had finally agreed on what everyone else was thinking: the Fast and Furious movie only had one film in it. Justin Lin gets rid of everything from the other movies and just makes another film about street-racing. If the idea is always fresh enough (Tokyo today, London tomorrow, for example), then we don’t really need any recurring characters. The idea falls slightly, because no one here is as interesting as the old lot. There is still no Toretto here, so the third film has no hope of laying a candle to the original. Everyone else feels two-dimensional, trying to breathe life into old clichés and recycled roles from the first. Again, Sung Kang is a pretty interesting figure, and easily the best thing about this movie, but he is nothing we haven’t seen before. The idea is there, but sadly this movie ends up coming across as pretty average.

I will give Tokyo Drift one thing: the best soundtrack yet. Every scene is injected with pulse-pounding Japanese music that really brings life to almost every sequence. In some ways, the music is what gives Tokyo Drift that lasting impression, as it brings so much atmosphere and style to the movie. If anything, Fast and Furious embraces and shows off Japanese culture amazingly well and, as a result, deserves far more praise than it has ever got.

Final Verdict: Nothing new and it is nowhere in the same league as the original, but Tokyo Drift features amazing race sequences and is undeniably cool. And that is what the fans showed up for.