3 Deleted Scenes That Should Have Made The Movie

Most of the time deleted scenes deserve to be cut from the movie. It is a natural part of the movie making process and it usually involves trimming the movie down to the necessary parts. In fact, I could make a second article about movies that needed more deleted scenes. However, every now and then you will hear a rumour of a scene that didn’t make the cut, sometimes even being dropped in the original script, before it is even filmed, and you think how much that missing scene could have helped the movie, or definitely deserved to see the light of day.

Quick! What was the one flaw of Thor: The Dark World? How many of you thought that the key thing to improve was a better villain figure? Yes, Malekith was a little cut and paste for a truly terrifying and memorable movie villain. It hurt the movie a little and it would definitely have helped if he had a deeper back story. Well, it turns out that there was actually an early scene that was cut from the script. It included an extensive background history of Malekith and helped set up the character, as a tragic anti-hero, rather than little more than a movie monster, trapped in a superhero movie. 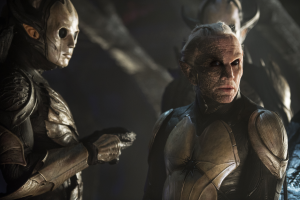 I had always thought it was weird that Ecclestone’s interviews seemed to be about a totally different villain. Ecclestone always described his character as the tragic war hero, who was forced to act out these dark actions to keep his race alive. Sure, he was still evil, but Ecclestone made it out as though he was just a hero for a different side. The movie could have easily been about the Dark Elves trying to save their race from the almighty Asgard Gods and Malekith would have been a hero. Hell, Odin was portrayed as a villain just as much as Malekith. However, until I learned that all of these scenes Ecclestone was talking about never made it into the final cut; I just thought that Ecclestone was failing to portray that in his performance. I feel like I had harshly judged his portrayal of Malekith, simply because he hadn’t yet realised those scenes weren’t making it into the movie.

That is one of the worst kill lines in movie history. Kill lines are one of my favourite things in the world. Some of the best movie quotes in the world come from them. “I’m Back.” “You never did learn to mind your surroundings.” “Yippie Ki Yay Motherf… (lucky coincidental explosion keeps the movie at a 12A rating)!” However, the one that Storm uses to kill Toad makes no sense whatsoever. Everyone that has heard the line was like: say what? For a script blessed with some of the wittiest movie lines around, it was an absolute dud of a movie quote.

However, as it turns out, that was meant to be the punch line to a running joke in the movie. Apparently, Toad had this thing that multiple times throughout the movie, he would use the line ‘Do you know what happens when a Toad…’ and whatever was relevant at the time. It was meant to happen several times throughout the movie and Storm using the line against him would have actually seemed really witty. If only we had been granted the context.

Now, out of all of the deleted scenes here, I think this one could have been very easily skipped. It is essentially a longer drawn out version of the flashback where we learn that Mr. Orange is the undercover cop and traitor to the group. It is interesting and if you loved the movie as much as I did, then you will definitely benefit from digging through the 2nd disc on the DVD and viewing it for yourself. The reason I want to add it on the list is that there is a completely new character in these scenes.

For one, she is the only prominent female cast member in the entire movie. Her appearance doesn’t really bring much to the movie, which is probably why it was cut, but it would have been nice to have one female character in a movie surrounded by male characters. She was an authority figure and was just as ‘tough guy’ as every other character in the movie. Again, this isn’t important to the movie, but it would have been nice to have a girl character thrown into the mix. Also, how pissed off would you be if you filmed for a cult classic like the first Quentin Tarantino and you never made it to the final movie? I can’t even find the actress’s name online. She had her big break and nothing came of it. That must have been absolutely gutting.