Sex comedies are a tricky kind of movie to get right. Of course, every teenage boy is going to sell his left ear for a copy of the DVD, but it needs to aim a little higher if it is going to do well in the actual cinema. A lot of films of this ilk have gone down the immature route and just thrown a couple of loose jokes together to hide the fact that the film crew just want to get as much nudity onscreen as humanely possible. Kevin Smith is too good a writer for that. He knows that sex is actually a pretty funny topic. Hell, most rom-coms use it for jokes, even if they are a little too apprehensive to fully tackle the subject. Zack and Miri succeeds, because it instantly highlights itself as a movie that isn’t afraid to have a man or woman turn up bare naked on their screen, but at the same time shows enough prowess, so that whenever that nudity is shown, it is always worthwhile and for a reason. 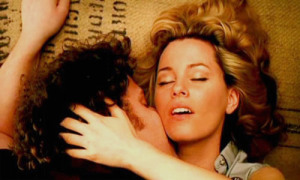 The relationship is a very beautiful one, as well. It is charming to see Zack and Miri attempt to be cold-hearted porn stars, when really it kills them when they see each other planning a sex scene with another person. The leads are remarkable in their roles. Elizabeth Banks is relatable and easy to fall in love with. Seth Rogen is at his best. You believe in them as a couple and that is the key thing that makes this movie so good. I also enjoy how the ending is a quieter affair that most comedies go for. Most comedies of this genre always go out with a bang, getting the entire cast together for a louder than life moment. Sometimes, I think this is usually a good way to go about a comedy, but here, it just feels right. It starts with just the two of them and it ends with just the two of them. A brave move by Kevin Smith, but one that pays off.

Warning: it doesn’t quite escape the smut factor of sex comedies. Smith builds on it with good characters, but he knows that he needs to add a level of ‘gross-out’ jokes to please viewers. Some work; a few miss the mark and feel more accurate for this kind of comedy. Remember, he has to please the people that picked up this DVD, expecting nothing but naked women and sex jokes. While the heart of the story helps you get through the low parts of the movie, some of those themes are still there.