Director: Jon Turteltaub
Cast: Michael Douglas, Robert De Niro, Morgan Freeman, Kevin Kline, Mary Steenbergen
Plot: Billy (Douglas) is getting married in his senior years, so rounds up his old gang for a hectic trip to Vegas, despite old grudges getting in the way of the fun.

Before going into this film, I had a vague idea of what flaws I would run into. It would be a bunch of old person jokes strung together, with four famous Hollywood stars attached, but going to waste on a run-of-the-mill comedy. I would leave this movie, feeling nothing and probably forget about it a week later. I ran into every one of these flaws, yet somehow it was better than I bargained it to be.

Sure, as the first half of an hour gets underway, I was beginning to roll my eyes. It was exactly what I suspected it to be. Kevin Kline gets a free pass from his wife, because we haven’t seen that plot device since 2011. Morgan Freeman fires out old person jokes left, right and centre and the only ones that will make you laugh, you already saw in the trailer. Michael Douglas plays the same role he has been playing for a few years now: looks younger than he is and a little camp. The only one worth paying any attention to his the grieving De Niro, a broken man since the death of his childhood friend and wife. And even then, he feels like he should be in a totally different movie entirely. When he first meets up with the rest of the cast, the pace feels awkward, as everyone else plays it for laughs and De Niro is asked to deliver this dramatic performance. I felt like I was simply checking off everything I said would go wrong with this movie.

And then they get to Vegas and things begin to loosen up. Don’t get me wrong; it doesn’t turn into comedy gold or amazing film-making. It just becomes fairly amusing and if you are stuck watching it, like me, then you end up sinking into the fun and going along with the ride. The jokes start working more frequently and the fun everyone has on screen is a little infectious. This movie has been broadcasted as an old person’s Hangover, but thankfully it doesn’t dive totally down that road and finds its own momentum. Sure, it does feature some Vegas tomfoolery, and there are the painful scenes, where the old timers end up judging a Bikini contest, hosted by LMFAO. But to combat those awkward scenes, we get some fun moments where Morgan Freeman gambles his pension away and an amazing cameo in the final act that almost delivered the best laugh in the entire movie.

One gag I did like was the whole ‘mafia’ side-plot. The trailer and first half of the movie hints at a younger rival for the gang, in the form of a douchebag partyer in Vegas, who reacts badly when these four old guys start stealing attention away from him. However, there is too much story to get through, so rather than wasting time on this idiot figure, the writers do something relatively clever. Using their respect in the hotel, the four leads fool this person into thinking that they are famous mob bosses and get him to run errands for them. I could seriously watch an entire movie about these four people, pretending to be gangsters. We got to see De Niro channel a bit of the good, old days in his performance and the actors almost became the ones we loved. 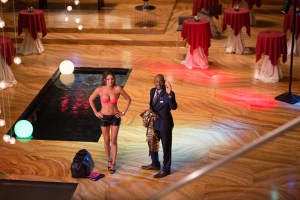 How did they cope with the movie? Well, most of the time they were being wasted, but it wasn’t all bad. Kevin Kline is easily the consistently funniest, but this is his genre, so we all expected him to knock it out of the park. Morgan Freeman also does well, and in many ways, he steals the best laughs and gets some of the better dramatic moments. Unlike the others, I felt that he benefited more from leaving serious acting for some comedy. He totally won us over, when he delivered his lines tipsy on Vodka Red Bull and the dancing scene in the finale was terrific. Michael Douglas seemed like the most boring of the lot, merely a plot device to get these more interesting characters into the story. However, in the final few scenes, he does get a monologue that pulls it all back into positive territory. And while I would much rather De Niro return to the crime genre, he is quite good here, when the rest of the movie joins him in some serious moments. There is one scene, where the character’s entire world is turned upside down and destroyed. De Niro’s expression when this happens is yet another reason, while he could be the best actor in cinema right now. Maybe ever.

Final Verdict: Last Vegas is hardly going to amaze anyone, but if you just want a few laughs, you could do a lot worse.