Director: David O. Russell
Cast: Christian Bale, Amy Adams, Bradley Cooper, Jeremy Renner and Jennifer Lawrence
Plot: Two con artists are caught by the FBI and are forced to help them take down a politician. However, when the mob gets involved, it could turn into their toughest con yet.

There is a lot to like about American Hustle. For a start, it is a movie about con men, proven to be a gold mine for movie fans (see Ocean’s Eleven and Now You See Me). Secondly, it is set in the 70s, allowing for the audience to be transported back to the nostalgic times of Elton John and really bad dress sense. And finally, it features some of the hottest actors on the block from the always brilliant Christian Bale, to the always improving Bradley Cooper and the starlet of everyone’s eyes, Jennifer Lawrence.

Then why was I less than impressed. I noticed several direction choices which I felt hindered the movie, although I could see where David O. Russell was coming from. For one, the con artists don’t actually do that much conning. This is a more realistic approach to this profession, showing us Bale’s Irving and Adams’ Sydney tricking people into accepting loans they will never receive money for. While the film always feels realistic, there is a sense that we want more ‘ta-da’ moments in our con artist movies. Also, the film feels very long, clocking in at over two hours. Con artist films always work best, when they are short and sweet, played at a pace almost too quick for the audience to keep up with. Here, David O. Russell slows the film down too often, so we can focus on character studies. After all this is the director famous for almost getting everyone on ‘Silver Linings Playbook’ an OSCAR nomination: we expect outstanding performances, god damnit! However, this just means that the film opens shakily, spending too long developing the relationship between Irving and Sydney, something that would have been better suited to sharper scenes. Also, when the film begins to drag, you will wish that some of the scenes were trimmed. We love spending time with these characters and all of the performances deserve this amount of time spent on them, but the actual story gets lost in the movie. 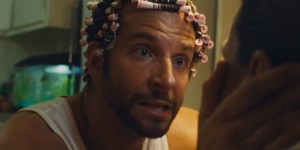 I got the sense that American Hustle fancied itself as the modern great crime movie, something cinema has been sorely missing. This idea was heightened, when a fantastic cameo from the king of crime films himself happens, giving us the greatest and most threatening scene in the entire movie. We get small time criminals, less than honourable cops and then the mob wading in and dialling the tension up to the maximum. The opening scene where Christian Bale bickers with Bradley Cooper even feels like Bale is channelling his best De Niro impression to harness the role of career criminal. It even improves some elements of the crime epics, especially when it comes to the character of the oblivious wife at home. Jennifer Lawrence’s character will hardly be known as a landmark in the feminist movement in cinema, yet she has more depth and strength than we would expect from this stock character. However, again, this becomes too much of a character piece to really work as something as memorable as Casino or Goodfellas. It always threatens to do something amazing, but simply rides along with the characters. Again, this is a decent movie and I enjoyed watching it, but I couldn’t overcome this idea that the film set a bar too high for itself to reach.

I really don’t want this to come across as a put-down for director David O. Russell, because I really appreciated most of his directorial tricks. His choice of music for the soundtrack was amazing, especially when he worked it into certain scenes so well. He would play scenes on top of each other, intersecting flashbacks with the present day, so certain beats of exposition played by quicker. Of course, his biggest accomplishment as a director, is giving the actors space to perform. When a scene just needed two of the lead stars to bounce off each other, he zoned everything else out and just had the chemistry between everyone speak for itself. Despite not liking some of the choices made by the director, I really did enjoy a lot of his little tricks and techniques.

Seeing as this film put so much stock into character, let’s dedicate the rest of this review talking about the characters. No matter how much I felt the film underachieved, I fully agree that every actor here was on terrific form. Christian Bale has, once again, changed his entire physique for the role. He has gone from stick thin to impressively muscular and now, here, he has a gut so thick it is amazing to wonder how he put it all on. While I mocked his accent as a De Niro rip-off, he does distance himself from Bobby and stands on his own two feet. He is the least flashiest con man we have spent a movie with, but he is powerful in his own way. He has total control of his lines and has chemistry with every other actor on screen. Bradley Cooper plays the FBI agent that pulls everyone into his web of deceit. While he is meant to be portrayed as a villain, Cooper humanises him enough to keep us invested in the character. Then we have Jeremy Renner, who, despite not getting as much material as everyone else, wins us over as the charming and friendly mayor, who doesn’t realise he is being set up. We begin to feel sorry for his character, as his dreams are used to manipulate him. 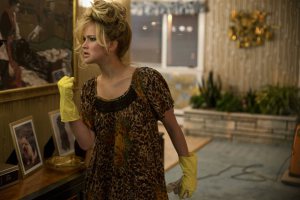 The two females give the best performances here though. Of course, I was always going to love Jennifer Lawrence. Her character is simply crazy and we all know how well Lawrence portrays crazy. There are moments when Rosalyn becomes a nasty and bitter character, but Jennifer Lawrence is so much fun and energetic that we can never find it in ourselves to dislike her. She is also a surprising source of comic relief in the movie. One of the greatest moments in the film is where Lawrence sets in motion a chain of events that conspires against her husband and his cons. She reflects on her horrible actions by scrubbing her house clean and singing to Paul McCartney’s Live and Let Die. It is a terrific moment, symbolising her character so well and was cut a little too short. Then there was Amy Adams, who was brilliant. She is the con artist of her own, that has her finger wrapped around almost every character in the film, aware that she is losing the ground beneath her feet. Amy Adams has never looked this gorgeous, capturing the style of the 70s and wearing tops so low, I struggled to keep my eyes off of her and take in the rest of the film. I remember seeing Amy Adams in a couple of smaller films a while back and wishing she was more famous. Now, after Man of Steel and American Hustle, she has definitely shown the world what she is made of and I am so glad to see her get these terrific roles that show off what an incredible actress she is.

Final Verdict: While I don’t think American Hustle was as good as it could have been, the performances are faultless and the direction captures the 70s really well.