The Walking Dead Game – All That Remains: The Review

Maybe one of my favourite things about the Walking Dead Game is just how psyched everyone gets about it. For a relatively Indie game developer that started off as a small company recreating Back to the Future (and not very well, I might add), Telltale Games is now the kind of powerhouse that becomes the most used topic point in the gaming community, whenever an episode of the Walking Dead (or sometimes just a single screenshot of an upcoming game), comes out. It becomes the talk of every forum, blog and gaming news station out there. Discussions, walkthroughs, reviews… the sheer excitement this game generates is enough to review this series in itself. 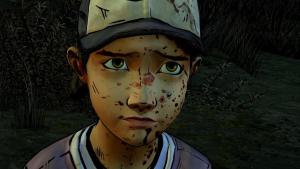 I don’t quite know how to summarise this episode, as the twists and shocks come right from the off. The basics are that the game opens with Clementine, now without Lee, learning how to survive in a world overrun with Walkers. The depiction of Clementine is amazing enough in itself. Letting us play her might seem risky to everyone unfamiliar with the game, but if you have already thrown yourself into the story, you will know how clever and impressive a move that it truly is. One – the game is a lot scarier when you are a ten year old fighting off walkers, rather than an adult male. Two – the change that has happened since we last saw her is incredible. Visually, she is already older. As her age hits double digits, she seems taller and more world-weary. Her eyes have aged the most out of everything: they are serious, untrusting, sad… Her personality is older and more mature as well and there are certain scenes that show this remarkably well. When coming face to face with other adult males, you can choose to make her character stand up to them with surprising aggression. Her eyes turn cold, she is given the perfect line and her verbal opponents rarely have a comeback.

I like how this episode approaches other members of the group. Yes, eventually the game does introduce a group for Clementine to join and no, it isn’t anyone we know (surprisingly, there is no sign of the 400 Days lot just yet), and thankfully Telltale Games doesn’t try the same trick twice. Rather than trying to make us be friends with this new lot, we end the episode with a cold distance from almost every character. No one trusts anyone, we are given the impression they are hiding something and we only ever see the tip of the iceberg when it comes to their character arcs. The one guy we end up feeling anything for is Luke, (and that might be just me – he is a handsome redneck called Luke who is terrible at poker: how could I not relate?!). It creates a certain moreish feel to the episode. We are introduced to several potentially interesting characters and we immediately want to get to the next episode to see where the writers are going to take these people. 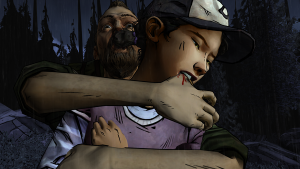 Let’s discuss this article’s thumbnail. Yes, there is a dog. And yes, the moment I saw that dog, in a game that prides itself on killing everything you love, I panicked. Clementine’s bonding with this animal was never going to end well. Luckily Telltale Games play on this thought in the back of our heads and do something very interesting and unpredictable with the dog, Sam. There were several easy directions to take this storyline, but Telltale Games definitely chose the best one that I am sure had every gamer jumping out of their skins. It is one of several moments that makes this particular episode so hard-hitting. There are several others, although most of them involve spoilers. Perhaps the most unsettling, and potential highlight of the season so far, is Clementine performing surgery on herself. It is a tough watch, bloody and painful to sit through, but it shows us how far this little eight year old stuck in a treehouse as come, and I think it is an important scene to play through to show us how different Season two Clementine is from her earlier self.

If I could be a pessimist and pick a handful of flaws, this episode does feel a little routine Walking Dead Game. Like 400 Days, I am worried that now we are dealing with a whole new set of faces, the game will slowly get stale. On the other hand, I also understand that this is the opening chapter in this new storyline. Like I said, we are given a taster of the characters to come and therefore, to get this tension, we have to sacrifice a little bit of quality in the first episode. I am sure it will pay off in a few episodes time. It becomes very clear that this episode runs low on material and tries padding itself out with a prolonged stealth mission. It is fun in its own little way, but is a poor substitute for action and might dissuade some. However, as I have said, these are tiny flaws and should not take away from the clever storyline that is the Walking Dead.

Final Verdict: While lacking in story, All That Remains makes up for it with surprising set-pieces, heart-breaking shocks and the idea that this little girl is perhaps the latest video game bad-ass. Move over, Master-Chief.