Beyond Two Souls: The Review

Developers: Quantic Dream
Publishers: Sony Computer Entertainment
Plot: A young girl (Ellen Page) is brought up in a supernatural clinic, when it is discovered that she is connected with an entity from the Other Side.

There’s no two ways about it. Beyond Two Souls could be one of the most beautiful-looking and character driven game of 2013. Every single frame is bursting with almost pitch perfect graphics, capturing every expression on the actor’s faces. Scenery is lovingly crafted around the story, and we are shown the murky depths of the ocean, the gorgeous vastness of the desert and the lavish luxury of a foreign embassy. Aesthetically, Beyond Two Souls does no wrong. 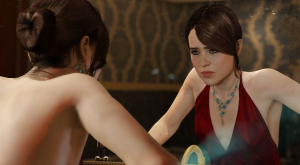 Story-wise, it is almost phenomenal. We are given a character totally unique, voiced by Ellen Page. We are shown the character of Jodie Holmes at every stage of her life, often out of order, and we soon learn that she has spent the moment she was born connected to an otherworldly being. Trapped with this human, the entity, who she names Aiden, grows angry and can be a vengeful and bitter force. As she is studied to figure out what lies beyond, Jodie and Aiden build a strange relationship together, where they learn to adapt with one another. By the end of it, Aiden becomes a force of unstoppable power the second Jodie is threatened and Jodie resigns herself to the role of the hero, the only person in the world who can stop the other entities that aren’t as friendly as Aiden. Ellen Page takes the role and runs with it. There is something so amazing about the quiet, resigned tone she uses, when she accepts a mission that will possibly lead to her death. Like she never had a choice the moment she figured she was attached to a ghost.

OK, so the story and graphics are amazing, but then things start falling apart. Well… maybe, falling apart is the wrong word, because in many ways, Beyond Two Souls is an experience from start to finish. It just never tries to be anything more than a great story. So while I am totally engrossed in this emotional story of a helpless girl trapped in a battle between the government and ghosts, I am craving the need to actually play something. A lot of the time, you are asked to control Jodie, as she walks into the next room to get to the next part of the story. The impatient will hate this game and even the patient will be slightly annoyed at the fact that there is little action.

The best fight scenes are told with quick time events, which I don’t overly mind as much as most people, but Beyond Two Souls uses them a bit too much. Also, I feel that Quantic Dream’s other two games, Heavy Rain and Fahrenheit, handled these moments a lot better. While they were pretty much press the right button at the right time, Beyond Two Souls asks you to finish the movement that Jodie is making in time. For example, if she punches to the right, you push the analog stick right. If she jumps out of the way of a punch to the left, you push the analog stick to the left. Not a problem. But the camera angles and movements are sometimes never clear. You will be watching the fight unfold and have no idea where the game wants you to punch, so you end up getting the living shit kicked out of you.

The exciting gameplay comes from controlling Aiden the ghost. However, sometimes Aiden is insanely difficult to control. He was tricky to manage on the controller and I’ve been told Steam players will struggle even more. It’s a good idea, but it is never clear what needs to be done. However, I cannot help but love scenes early on, when you are asked to terrorise a couple of bullies at a party that teased you. It’s like Insidious, but you are the ghost. While I did not play it, I have been told that co-op is also a way to play this game. One of you plays Jodie, the other plays Aiden. I cannot see how this would work. Surely it would be one person waiting for the other person to come up with an obstacle and then having a moment with struggling with the controls. It doesn’t strike me as that interesting an experience. 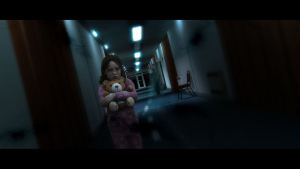 Another niggling little thing I thought afterwards is that I never felt that in control of the story, like I did with Heavy Rain. The best thing about Heavy Rain was the fact that the story altered if you messed up or made an important decision. We never really get that with Beyond: Two Souls. The game shoots itself in the foot by telling the story out of order. Sure, it is interesting and lets us get to the good parts of the story quickly without skipping anything character-driven in the process, but we always know where we are going to end up. Therefore, we do not fear for a character’s life, or our own life, because we have seen them in the future sections of the game. Sure, you get to choose how you end up, but even the love interests feel guided to you by the game.

Again, I did not hate this game. In fact, it was a really enjoyable experience and I am glad I took the time to see this game through to the end. I just wanted more gaming wise. However, it wins back points for having a training montage in the game to explain away your CIA martial arts skills. Every game should have a training montage from now on. Arkham, Assassin’s Creed, Mario…

Final Verdict: A beautiful story that is slightly lacking in actual gaming. While not game of the year, it might be the movie of the year.