Diamonds Are Forever: The Review

The movie opens on an idyllic shot of an Asian home, the Oriental architecture allowed to get a moment of serenity. Suddenly, a man is punched through the paper wall of the house, rolling onto the floor. Enter Sean Connery, back from his movie break from the Bond franchise, looking intimidating, a force of vengeance, yet at the same time, unbelievably cool. There was never any doubt that Connery will always be Bond, James Bond.

After finally defeating the nefarious Blofeld, Bond is asked to handle a fairly open and shut case of a diamond smuggling ring. Taking the place of imprisoned smuggler, Peter Franks, Bond is to enter the ring, shake a few trees and see who is behind the theft of several diamonds. He meets up with the seductive Tiffany Case, the next link in the command, and from there he tries and figures out who has the diamonds and who the buyers are. At the same time, two unimposing assassins are going around, wiping out anyone who comes in contact with the diamonds, making Bond and Tiffany the next targets in the crossfire. Bond must act fast if he is to protect her and find out who the enigmatic property owner, Willard White, really is: an answer he might not be ready to hear…

I feel I should start my analysis of Diamonds are Forever by referencing my last Bond review. My main criticism for that film was how the story just went from set-piece to set-piece and Bond stumbled across vital clues to the overall mystery, rather than coming across as an intelligent secret agent. As I watched ‘Diamonds are Forever’, I realised a clear argument could be made that the story suffers the same mistakes. Bond obliviously wanders around this drug smuggling ring and often ends up lucking out and revealing who the next member of the smuggling syndicate is. However, this was never a problem for two reasons. The main reason is because it shows another side to Bond’s skill. He has few leads, so he puts himself into the middle of the action and adapts instantly as the situation changes. He goes on hunches, takes educated gambles and this is why he lucks out on answers. Sure, he does get very lucky, but that’s where point 2 comes in. It’s funny. Young decides to play this side of things for laughs and it is very amusing, when Bond’s enemy stops his assassination or when Bond accidentally gets himself a small group of mobsters to carry out his dirty work for him.

While we are on the subject of humour, it does get a little hit and miss. Tiffany Case’s character does get a little slapstick at times and sometimes the action gets a little camp. A scene where Bond drives a moon buggy through the desert, outrunning armed guards in quad bikes is cringe-worthy. On the other hand, I guess I will end up missing this scene when the Roger Moore movies get into full flow. Other examples of humour work well. Willard White is a welcome addition to the film (the second reveal, not the first), often coming up with some great lines. The banter between Bond and Leiter (my favourite Leiter so far, for those counting), is pretty amusing, especially when he wanders into Bond in the middle of a fight with White’s two gymnastic henchmen, Bambi and Thumper. Diamonds are Forever is a really funny Bond, but come prepared, only some of it works. 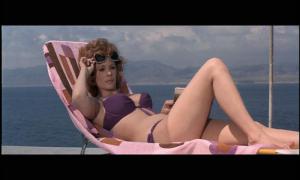 An interesting aspect of the movie I want to talk about is the two henchmen, Mr. Wint and Mr. Kidd. They are the two assassins taking out the loose ends in the smuggling ring and they are memorable, because they are homosexual. I remembered that they were gay, but I had always assumed it was implied. But no, they are clearly in love with each other, as shown by Mr. Kidd making a joke about ‘Miss Case being pretty for a woman’ and then a moment, where the two of them kill a corrupt doctor and then hold hands, as they walk away. This really surprised me as this film is fairly dated and most homosexual characters get a bad rap in this decade. Hell, Mr. Kidd and Mr. Wint are portrayed better than most 21st century gay characters. They might be evil, but their sexual orientation is never a part of that, making them very interesting characters. They were a nice change from the usual ‘muscleman’ henchman we usually get.

As ever, a Bond film is usually all about its finale rather than the entire film as a whole (something I must admit Roger Moore’s films improve on), and this finale is no different. It is featured on a small oil rig in the middle of nowhere and every trick in the book is thrown at it. We get explosions, massive firefights and the demise of an iconic villain (one who deserved to be finished off by Connery in his last outing as 007). It does suffer from the usual evil villain monologue that allows Bond to get the upper hand, but it is still a very exciting way to tie up the film.

Final Verdict: Diamonds are Forever succeeds again at giving us the full Bond experience. Sometimes the humour does get in the way, but regardless, Connery will be missed.