Terminator: The Sarah Connor Chronicles – Season One: The Review

Twenty minutes into the first episode, a Terminator corners a young John Connor and holds a gun to his forehead. Connor, knowing there is no escape, closes his eyes, almost glad his constant run from danger is finally over. Suddenly a car careens out of nowhere at full speed, taking out the Terminator. Summer Glau steps out of the car, the sweet girl at school who it turns out is a robot sent from the future to… (you know the drill, people), holds her hand out to John, fixes him with a cold robot stare and deadpans: “Come with me if you want to live.” This is the exact moment when I realised that I was going to love this show.

But of course, the pilot was always going to be awesome. It features killer robots, Lena Headey portrayed yet another kick-ass female protagonist we love right from the start and break-neck action. In that single episode, we are given everything we want from the series. The problem with the Sarah Connor Chronicles is that it is a little unsure how to settle in a television series format. It has plenty of ideas where to take the story and the show never gets boring. There is always a thread of story on the go and even when a Terminator isn’t present in the story, there is still the sense that the characters are moments away from being torn to pieces by a renegade robot assassin. However, it doesn’t quite master that steady flow of information and hook to keep you tuning in next week that makes a good television series. While I liked what I saw, I found myself with little desire to start immediately watching the following episodes. The biggest example of this is the finale. It has a suitable enough climax, but answers few questions, almost as though there is going to be another episode next week. The climax is also only satisfying, because it is more thrilling than the previous two episodes. It does not match up to the terrific fight sequences in the first handful of episodes. 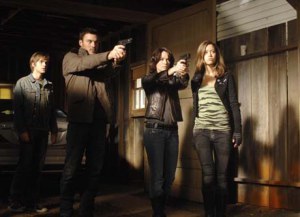 I like how the show handles the actual Terminators. It would have been a very easy thing to have each episode feature a different Terminator and the team of heroes fend that villain off. However, this season only really features three Terminators and that is definitely a good thing. We never lose sense of that fear that the heroes can be very easily killed by these master machines, something I was worried a television series would lose track of. Even defeated Terminators are still a threat, especially during a sequence where the team are nearly wiped out by a loose memory chip from a Terminator killed three episodes earlier. This is the kind of show where you partially expect it to fail, but it never becomes bad television. Under-achieving perhaps, but never bad TV.

The best thing about the show is the fact that the Terminator franchise has already set up some terrific characters to explore. John Connor is one of the most complex heroes in movie history. He is a future freedom fighter that has to live with the fact that he is meant to be some sort of saviour. This season focuses on his slow evolution into a hero, which is good, because the movies kind of jump past the section of the story where Connor goes from douche kid to resistance hero. Sarah Connor is just as interesting a figure. She is the ultimate mother figure. Her job is to protect her son and she goes through some dark choices to accomplish that. The first episode lays out how far she is willing to go, lines her priorities up for the viewer and Lena Headey totally works with the character. She is the ideal actress for the part.

Summer Glau is a bit more of a mixed bag. I love Summer Glau and she is one of the best actresses on TV. She really goes for the role of robot and we can see every movement being choreographed and carefully worked out. She adds humanity to a role totally devoid of humanity and this is the perfect character for her to show off how talented an actress she is. However, the problem is when she is doing nothing. As a Terminator, a lot of time, she has to be totally vacant, powered down if you like, and it is then that we begin to suspect that she might be a little wrong for the role. She just doesn’t look like a Terminator, which I guess is part of the point, but there is something slightly off about Summer Glau, when she is still. Luckily, this is only a small part of the show and she really comes alive, when she is in action. Every line that comes from her mouth becomes a quote and every expression will have you laughing in a way a Terminator movie should. The fight scenes are phenomenal. Summer Glau can really act through her fighting. We have seen her kick ass in ‘Firefly’ and I am sure we will in ‘Arrow’ at some point, but each time, it is a different style of fighting. Here, she totally looks like a relentless robot, her arms locked and grip firm. She takes blows without flinching and we totally believe that this relatively small girl can punch her way through a wall. When Summer Glau starts fighting another Terminator, these are the best moments of the entire series.

What do I want from Season Two? More of the same really, but it needs to work on its timing. There are only two seasons, so I am sure that the finale will not be a problem, but maybe the episodes could have more of a gripping end. I really like this show, but it needs some work done to it. However, I did enjoy this, so when it comes to season two, I’ll be back. (Sorry, couldn’t resist.)

Final Verdict: Some great ideas, but Terminator isn’t quite sure how to be a TV season. Otherwise, it makes all the right calls and has a lot of potential.