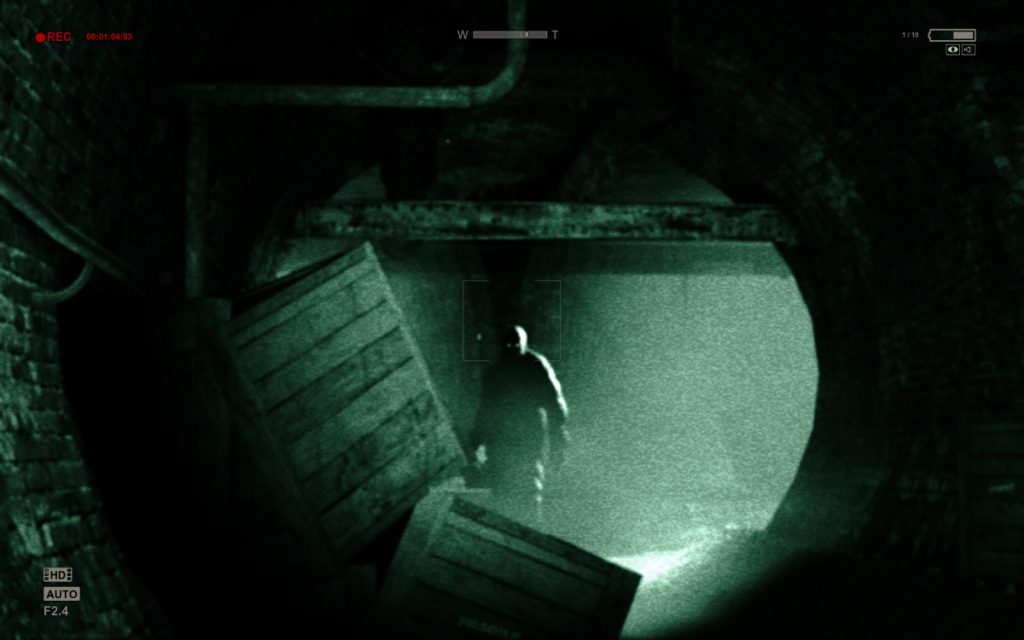 Developers: Red Barrels
Publishers: Red Barrels
Plot: You are a journalist, hired to investigate some strange going-ons in a mental asylum. You soon become trapped in a nightmare and struggle to make it out alive.

This review is fairly exciting, because it is technically by first next generation console game, even if I didn’t actually play it on the Xbox One or PS4. Outlast is the survival horror game from Red Barrels and promises to be one of the most engaging, terrifying experiences of the gaming year.

I was a little unsure about this game going in. The first thing you learn as the game opens is that there is no ‘fighting’ game mechanics. You play as a journalist with no combat capabilities. Your job is to film what you see and run from anything that might kill you. The only defence you have against the enemies in this game is to hide anywhere you can find. With this in mind and cringing at the prospect of another failed survival horror experience (the list of games to get the genre wrong is excruciatingly long), I didn’t hold much faith in the title. However, urged on by the hype spreading across the internet, I threw myself into the game and found it to be the surprise underdog for game of the year.

It is brutally terrifying. Like Dead Space, the jump-scares kick in so quickly that you barely have time to register your surroundings. You are thrown into a nightmare that rarely gives you time to catch your breath. There are several layers to the horrors as well, so there is this sense of a slow reveal throughout the game, as the actual nightmare you are witnessing becomes very clear. You are constantly second-guessing where the story will take you. At first, it seems like your standard ‘killer rampaging through an asylum’ story, but then the list of people out to get you begin increasing (the two naked sword-wielding thugs are the quickest to get you panicking and the midway break where you take on the crazy doctor is fantastic), and you realise that there is something much deeper and scarier going on. The story is a very important factor of the game, because when the horror almost gets too much, this is the crux that keeps you digging for answers. You actually become the journalist, knowing you should go for the nearest exit, but glued to this story, desperate to find out where this horrific journey will end.

The hiding gameplay turns out to be a stroke of genius. In most survival horrors, the enemies look scary, but a quarter of the way in, you master the fear and learn the secret to killing them. You end up adapting to your surroundings and the games always slowly evolve into an action. We never get that here. When you see an enemy, you run. Death comes all too quickly and your only available option is to pray that the crazy lunatic with a baseball bat doesn’t check under the bed that you are under. You never get that upper hand on the game and you feel like the victim of this nightmare from beginning to the end. The only time this lack of action ever becomes a problem is when you die and have to replay that hiding section you just completed. The impatient will hate that, but in many ways, that just adds to the factor of fear: you cannot risk dying.

Tone is also pretty effective here. Sometimes we get a break from the extreme violence and terror just to go for good, old fashioned chilling. The game is shown pretty much all through the end of your camcorder, as you film every last bit of evidence in the asylum. This makes Outlast the very first found footage game, a genre that hopefully won’t get as overdone as it has in cinema. The game is very dark, but in a good way (takes moment to frown at Resident Evil 6 which does not understand lighting in the slightest). Most of the set-pieces you find yourself in will be plunged into the pitch black. The light will come from the night vision on your camcorder, which is powered by battery. To get more night vision, you must seek out batteries dotted around the asylum. When you are in a sequence where you need to activate three valves to power up the lift to continue in the game, the battery power adds the pressure. You want a break from the horror, but the dying light on your camcorder pushes you forward, always throwing you back into the terror. There is no escape from the crushing dread of Outlast.

My one and only complaint is length. Part of me thinks this game is paced perfectly and I doubt that it could carry on for much longer, without becoming bloated and tiresome. However, that being said, it does feel a little short. You finish the game before you really get started. This flaw is harshly juxtaposed with the fact that, from what I’ve heard online, few have managed to complete it. The horror has conquered most gamers and they have been reduced to a weeping mess. Well, I was too, but I completed the game while wetting myself constantly. But it is all worth it for the immense satisfaction, when it is finally over. You throw your controller down and feel glorified in the knowledge that you have survived Outlast.

Final Verdict: Terrifying, horrific, the scariest game I have ever played. If you can stomach the experience of being chased by a man with a sword and bare genitals, then you will love this game.