Jason Statham has made a lot of action movies. He brings out about three a year and only a few of them become memorable. In many ways, he is a genre of his own right, coming with several box-sets that I am sure his fans will collect lovingly. However, only a few really stick out from the majority of his films. In my opinion, his best and most original film is, by miles, Crank.

The film starts with Chev Chelios, waking up in a cold sweat. He finds a video tape in his home, where Ricky Verona, a cartel leader with a grudge, reveals that he has broken into his home and injected him with a deadly poison that will kill him in a few minutes. Luckily, Chelios soon realises that he can hold the poison at bay by keeping his adrenaline pumping. Therefore, he has to chase after Verona non-stop, a moment’s rest becoming fatal for him. With the help of a doctor who might be able to cure him and his allies on the street, Chelios chases after Verona, with the irresistible thought in the back of his mind. Maybe he should just go to his girlfriend’s house, curl up with her and die in her arms.

Crank’s success comes from how stupid it is. No, maybe stupid is the wrong word; this is a silly movie. It’s not stupid, because it knows what it is doing every step of the way, but it is silly in the sense that it is made with a very child-like sense of humour. Every stereotype and racist remark is used and you might find yourself cringing with how the directors got away with making this film. Some of the jokes come straight from Sickipedia. In order to distract the cops, he points out a random Israeli and shouts ‘Al Qaeda’, causing a public riot on the streets. Admittedly this is one of the few jokes that oversteps the thin line it walks on, but I am sure that there are other jokes that made other people cringe. Everyone will be offended and critics will hate it. But that is all part of the fun. 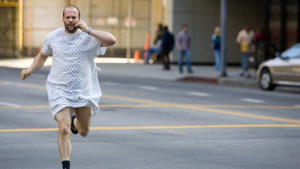 Maybe the best thing about Crank is how Jason Statham totally gets the humour. It is a very hectic direction style (one of the key aspects that makes you realise that this movie is actually made by talented people and not some stoners with a bad sense of humour), and Statham works very hard to keep up with it. There are some quieter moments (very few given the premise), and in all honesty, the script gets too cheesy for these deep subplots. However, Statham works for them. The monologue about how he realised he had to give up his mercenary lifestyle for his girlfriend is awful, but Statham handles it well and it is another theme that makes you realise that this is one of the better Stathams. There is a good actor hiding in there somewhere, it just needs the right director to find it. Character piece aside, Statham simply has fun with the movie and this is so infectious that we are right there with him, loving every kill, quote and scene.

Yes, there are problems here. Other characters don’t get too much of a role, other than a few jokes poked at them. Amy Smart is the typical ‘annoying girlfriend’, and while this is satirised by the film, it is still there. Villains are killed long before they are developed and the few characters given decent material are simply outshined by Jason Statham. But we don’t care. We aren’t here for good characters or a coherent storyline. We are here for fun and Crank is one of the most original action blockbusters in recent memory. It is action-packed right from the start and it actually takes a lot of talent to keep a film like that going. Some will hate this film, understandably so, but if you can get on the same wavelength as Crank, it will be one of the most enjoyable action experiences for you.

Final Verdict: Logic and exposition are banned from the party and replaced with fun, adrenaline and most importantly, Jason Statham.