Teen actions are very tricky films to get right. In theory, they sound like a sure-fire hit at the cinema. Almost every teenager out there has wanted to break from the monotony of school and star in something akin to their favorite action movie. Surely, a film where a relatable teenager becomes wrapped in a conspiracy that requires them to play James Bond for the day should storm the box offices. Sadly, there are several pitfalls with this sub-genre of action and Abduction falls for every one of them.

There is a trend at the moment where all of our action heroes start the movie as top-of-their-game heroes. Superheroes start the film as the strongest character in the movie. James Bond is a spy trained from a very early age at every skill that the writers can think of including in the latest film. No longer are we treated to an underdog, like Nathan Harper in Abduction, stepping up into the role of an action hero. While we could argue there is a bad thing about our movie heroes no longer being characters we can relate to, it is fairly easy to see why this is a problem for writers. It makes little sense how Taylor Lautner can take on all of these Russian hit-men and FBI agents. It doesn’t help that Lautner isn’t a talented enough actor to take on this real sense of desperation that other underdog heroes like John McClane from ‘Die Hard’ or Sam Witwicky from ‘Transformers’. We never relate to Lautner and that is the biggest problem with this film. We are never really a part of the action and it really hurts the overall experience. 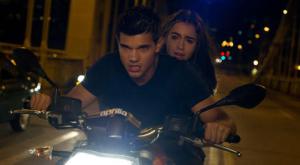 The most painful thing to watch is the great actors who put in terrific performances, but get shoved to the side for Lautner to try and act. Jason Isaacs and Maria Bello are the best things about this film, but the moment you realise where this film is going, you realise that they aren’t going to last too long. They are the origin part of the film and when we have moved on to the fighting, we miss their presence on screen. Better are Alfred Molina and Sigourney Weaver. Molina gets the meatiest part, although it does feel standard ‘Molina’. The FBI agent, who could be good or could be bad, deserved a little more personality to stick in the memory. Weaver gets a glorified cameo, popping up for moments of exposition and snappy dialogue, but never getting the chance to show off the fact that she is one of the biggest and most talented names in the movie. Michael Nyqvist is a suitable villain, but shows up too late and, just like his antagonist in the fourth Mission Impossible, isn’t given enough material to have fun with. Just like anyone else in the film he isn’t trusted with a big enough role.

So good points? Well, Taylor Lautner is adept at the action side of things. Wait a few more years and he could turn into your typical grizzly action hero, without an acting bone in his body. It works for Van Damme and Seagal, so Lautner might get lucky outside of his teen career. The star of the show is the girlfriend character, Lily Collins. She is everything we wanted from this movie. She is a fantastic actress, her character is relatable (forgive the damsel in distress cliché and love interest subplot – it’s all part of the male teen fantasy, remember), and she nearly saves this below par action. Maybe a better movie would have been Lily Collins being involved in the conspiracy and Lautner as the supporting star bring some bland acting, but nice action scenes.

Final Verdict: Abduction’s biggest flaw is being forgettable, when it has so many talented stars in the wings. Lautner isn’t strong enough to lead a film just yet.