Developers: Game Freak
Publishers: Nintendo, The Pokemon Company
Plot: A young kid moves into a new neighbourhood and he makes some new friends, when he decides to take a Pokemon adventure to discover the secrets of Mega-Evolution.

At first glance, this is a completely new re-working of the Pokemon games. Visually, it seems more 3D, rather than the side-scrolling nature we are used to. This helps proceedings a lot, as we can actually see the Pokemon in the game a lot more clearly. Locations are more fun to spend time in. Your character can be subtly modified. Nintendo could have been argued to have gambled and recreated a brand new Pokemon style, which makes it rather ironic that the crippling problem with Pokemon X & Y is the fact that it is practically the same game once again.

I would summarise the plot, but if you have played any other Pokemon game ever, you will already know it. You are the new kid in town and you quickly make friends with the local Pokemon professor. You and a group of friends get a Pokemon off this professor and set out on your own adventure, which sees you take on several gym leaders across the map and compete to be the world’s greatest Pokemon trainer. We’ve done this all before and when I was playing the game, the entire thing felt a little stale. To spice things up, the writers add in the theme of Pokemon Mega-Evolution. I like the concept of it; mega-evolution is a temporary evolution certain Pokemon can undertake during battle, so it is fairly exciting to see your favourites (Charizard or Torchic), get to a whole another level. Yet, to stretch out this new theme to the maximum, the game spends most of its play-time delving into the history of Pokemon. We get through pages and pages of exposition (being a RPG, it is literally text), and at times, it is really boring.

While, we are on the subject, exposition struck me as a really massive problem with the games. It never occurred to me before, as I know quite a bit about the franchise, but there are a lot of facts and information to get through. As well as the idea of Pokemon, there are all of the combat rules, special items, and on top of that, new features to discuss. No matter where you are in the game, there is always more information to be learnt, which can be tiring. It can be exhausting for the new gamers to break into the franchise and I can see potential new converts being turned away by the sheer amount of exposition to crawl through, in order to get to the good point of the game. Even if we could argue that the game does well to squeeze all of these pointers into conversation subtly, it is still an awful lot of effort to get through, which could become the downfall of this great franchise. 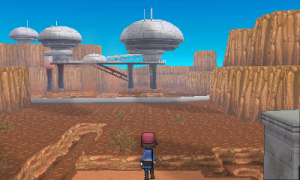 My next negative point is going to be laughed out of the window, because it is a kids Nintendo game, but god, is it childish?! With the older Pokemon games, it was never that clear, other than some terrible dialogue, which was part of the charm. There was one scene that really annoyed me. You and your best friend and rival, Serena, reach a part of the story, when only one of you can unlock the power of Mega-Evolution. You end up fighting for it, a battle which you win (or are punished by taking the time to reload your saving), and Serena’s entire journey is brought to a grinding halt. However, she is all smiles and wishes you all the best. It is frustratingly family-friendly. Gary, from the first game, would have been much more a bitter rival, while Serena is just ‘cutesy’ and ‘boring’. There is also a feature, where you can make a PR video to show off your unique personalities. I tried it and realised that it is designed to kids to the point where it alienates everyone else. At least, the first Pokemon game was suitable for everyone. The bad guys are also pretty tame. We have had Team Rocket, the show’s main villains, and following them up were Team Aqua, who were fairly unique in their way. Team Flare are boring in comparison. They keep babbling about fashion and being cool, which is a terrible way to make you associate the game’s antagonists with villainy. The rest of their plot is pretty generic and their appearance just makes you wish that you were playing any other instalment of the Pokemon franchise. And that is the main problem here. Playing this game just wants you to get your hands on the older games in the franchise, which makes you get fed up with the campaign pretty sharpish.

However, I guess I still had fun. The gym battles were exciting enough and the Pokemon are fresh and exciting enough. While it strikes the player as repetitive, when you go through a pitch black cave about a quarter of the way in, the entire game is, at the very least, fun. I enjoyed playing it and reminding myself about the fun world of Pokemon. Basically, the general impression I imagine most people will get from this game is that it is a fun few days to spend casually playing, but we have had it so much better before and would find it much better to invest time into one of the older games.

Final Verdict: Pokemon X and Y makes it seem as if the franchise has finally run out of steam. While enjoyable, it is the same old story, and a new texture pack isn’t going to change that.