Doctor Who – Season Four: The Review

While being moderately impressive, there is plenty wrong with the fourth season of Doctor Who. I think it is the worst season of Doctor of the time, although not for the reasons I actually expected.

The season opens with David Tennant wandering London in the 21st century, still reeling from the loss of Martha Jones and Astrid. He bumps into old friend, Donna Noble, and after proving adept at solving a group of murders around her town, he decides to take her along with him, unaware that he is trying to be contacted by Rose Tyler, who is trying to break through the barriers between parallel universes to warn him of something.

The season opens slow, which doesn’t help my dislike for the season. The first two episodes are mediocre at best. The ‘Fires of Pompeii’ is one of the most abysmal efforts at an episode yet (although it does guest-star Karen Gillian and Peter Capaldi, which is quite cool). Thankfully, the following few episodes pick up the pace remarkably well. The third episode explores the Ood’s history, bringing us some action that suggests a bigger budget. Then we get a two-parter, bringing back the Sontaran, another alien race from the old season that are due a comeback. That story is written very well and boasts some interesting character twists. Sadly, that pair of episodes is followed by the Doctor’s Daughter, which rivals ‘Fires of Pompeii’ for most pathetic episode yet.

Interestingly though, Catherine Tate is not the reason for any of these flaws, something I suspected she would be. She impressed me during the Christmas special, but I still had doubts she could pull off becoming a regular to the show. She does boast her comedy chops, but her stubborn nature is actually quite a refreshing take on a Doctor Who companion, rather than a love-sick puppy. Besides, with Rose being hinted at making a return, there was no more room for any more romance. The comedy of Donna’s character also helps pile on the drama when it needs to. When Donna stops joking, you know how grave the situation is. Yes, in the final beats, she does go a little too Catherine Tate, but T. Davies does some interesting things with her character and I think that she was one of the best things about the fourth season of Doctor Who.

What I really enjoyed was the ‘Silence of the Library’ story arc. Predictably it was written by Stephen Moffat, which really makes me feel bad about criticising him later on, because he actually is really talented when he is only asked to write for a single story in a season. We are given a terrific new villain, the Vashta Nerada, who have yet to appear outside of this episode. They are carnivorous shadows, which is a fantastically original idea in itself, but the way they begin possessing their victims, stripping them away to creepy skeletons in space suits is hauntingly good. They add a sinister, creepy tone to the proceedings, which raised this episode beyond the standard of the season. It also has the kick of introducing Alex Kingston as River Song, which of course grows into a massive stretch of narrative, opening up some great ideas. This episode is where it all starts and that is an exciting thing to see in retrospect. Another episode that deserves a round of applause is ‘Midnight’. It is a quick-fix episode, but in being a contained, small-set, this story becomes really impressive and original. The threat is never truly revealed and the human element of the story is terrifyingly great. It is up there with the best of the Doctor Who stories, which makes it even more amazing that it is buried in a season with some of the most below average episodes. 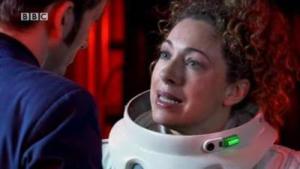 The finale is what really kills the season for me. Like Season Three, it just goes too big. The problem here is that T. Davies sensed the end of his reign as show-runner, so planned to go out with a bang. This two-parter feels like a love letter to himself, making the entire ordeal stink with a certain amount of arrogance. He doesn’t even leave for a few episodes after, so we have to go through it all again very soon. In short, the Daleks return with a plan to wipe out every parallel universe and planet from existence, leaving Daleks as the only species in existence. Standard Dalek plot. Then to spice things up, almost every companion created by Russell T. Davies teams up to take on the Dalek empire. Captain Jack and the remain of Torchwood, Sarah Jane Smith and her team, every character written off by being abandoned in a parallel universe and even Harriett Jones for some reason. The cast never get a time to shine, because they get so bloated. It does work as a look back at the best elements of Russell T. Davies’ reboot of Doctor Who and I loved the moment when David Tennant and Billie Piper locked eyes for the first time since Season Two. It was a magical moment. Russell T. Davies does deserve this tribute episode, but it simply was handled poorly and got a little embarrassing. All spectacle and slim writing. If you are impressed by loud noises and your favourite characters simply showing up rather than following up their comeback with actual actions, then you will like this season, but for me, it is sadly a pass.