Director: Paul W. S. Anderson
Cast: Milla Jovovich, Michelle Rodriguez, Eric Mabius, James Purefoy, Martin Crewes, Colin Salmon
Plot: Alice (Jovovich) wakes up in an abandoned mansion with no memory, when a crew of SAS soldiers pick her up and take her along with them as they proceed into a military lab with infected scientists.

When discussing movies I hit a brick wall with Resident Evil. It is widely regarded as a weak movie, a thin story acting as excuse to bring these fantastic series of games to the big screen. However, for one, I actually quite like this movie, but what’s even worse, I totally disagree that the original Resident Evil movie is even a poor film. For the most part, I think it was well made, given a decent thriller story and does the game franchise justice.

The story starts bloody, getting you from the start. A group of scientists are exposed to some sort of virus and a military computer system, called the Red Queen, activates a program that quickly kills them off. It is a tense, gory moment that uses one particularly inventive method to behead one of the victims. We are quickly taken to Milla Jovovich waking up, naked, in a bath tub, no memory of how she got there (we’ve all been there, am I right, ladies?). Before she can even get a bearing, a group of military agents turn up, claiming that they are here to pick her up and proceed into the same laboratory we saw before that is apparently underneath the mansion, answering the distress call sent in the opening scene. When they get there, tagging along with another person who lost his memory, photos suggesting he is Alice’s husband and a reporter, who is trying to get some answers. When they confront the Red Queen, they discover that she is trying to keep whatever is lurking in the depths contained.

As far as zombie movies, this is a good set-up. We get this claustrophobic setting and a group of characters that are more than your dumb horror movie victims. The zombies are done well, obeying all of the rules that Romero set with his vision and used sparingly and precise. Even better, there is an upgraded zombie for the finale, thanks to this idea of the Umbrella Corporation having mutated monsters at hand. On top of that, we have this rogue computer system that has a few tricks up its sleeve that have been elevated to cult status, thanks to a fantastic action sequence in a laser corridor. Despite people criticising this movie, it handles its material very well and accomplishes everything it sets itself out to do.

I think the story is a good one. Paul W. S Anderson understands that he is making a video game adaptation and a daft one at that, so he needs to embrace certain qualities of B-Movies. Therefore we get some gruff commando types and as the climax of the movie kicks in, Alice suddenly does a Bourne and remembers she has some pretty cool fighting moves up her sleeve. Yes, when the zombie dogs show up, there are moments when you have to switch off the logic side of your brain and just have fun with the movie. But the original film has the correct balance of dumb fun and clever writing. There is a twist buried in the movie, that, considering we all thought this movie was a pretty straightforward dumb action, comes as a total shock and I wish more was done with this little secret. There are some great character arcs here and there are even some moderate scares. I wouldn’t call this a horror movie, but there are some moments that make you jump. My favourite part of the film is the eerie moment, when we first meet the zombies. We are introduced to the Infected by the sound of an axe being dragged slowly across the floor, the sound echoing around this lab. It is incredibly chilling and a moment that proves that this movie knows what it is doing with the material. 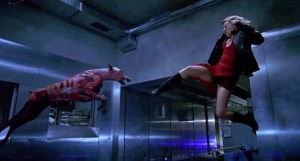 Acting wise, the B-Movie style begins to kick in more. I don’t think much of Eric Mabius as an actor and he becomes a little annoying at certain points of the movie (although, I like how he is the helpless love interest of the female action hero – the feminist in me appreciated that). The supporting cast are little more than gruff action heroes, even veteran actor, Colin Salmon, given very little to do, but put on a deep American accent and look intimidating. Milla Jovovich isn’t the best actress out there, but she performs Alice very well. She gets better with the character as the franchise grows, so don’t be too disheartened when she flunks a line here and there. Michelle Rodriguez is the real person to applaud here. She takes her usual bad-ass female role and gives the performance of the life-time. The script handles her character well and the make-up used on her to chart her mental descent works really well. If the zombie action isn’t doing anything for you, watch out for her and wonder where Paul W. S Anderson is taking her character.

Final Verdict: Yes, this is a dumb action movie, but it is clever in places and deserves more respect that it has been given. A very enjoyable zombie action.