Yeah, it’s back. Crappy title and all.

Season Three is a risky one from the writers of Cougar Town. Every few episodes there is a narrative device that threatens to drastically shake up the comfortable, familiar setting of the show. The first episode opens up with a major plot point, that ends up becoming the running theme of the third season and also, a new character is introduced, known as Holly, followed by a surprising turn of events. Both story devices are handled well and before long, fears are dissuaded that this good show will lose its touch. Cougar Town is here to stay and it isn’t planning on moving for a good, long while.

The third season is also the most critically acclaimed season so far, receiving a score of 80 out of 100 by Metacritic. The Huffington Post summed up the third season the best, though by simply stating that fans of the show will “find a lot to like about the new season”. And there really is no better way of putting it. Once again, Cougar Town delivers the laughs, the drama and the character development that this show always seems to excel at. While How I Met Your Mother and the Big Bang Theory seems to snap up all of the American sitcom glory, it has always surprised me at how little limelight is left for Cougar Town. This show is still the hidden gem of the TV world. 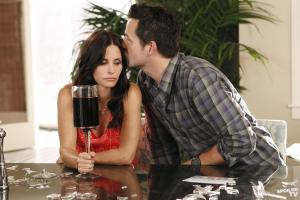 We all need a wine glass that big. FACT!

My one flaw of the show is that Courtney Cox seems to remain the weakest character of the bunch. She delivers the laughs well enough, but Jules as a character has always seemed like the kind of woman you want to struggle. She is needy, crazy and sometimes it is hard to agree with her on anything. True, the show does milk this side of her character and most of the season revolves around her friends and family trying to control her personality, rather than siding with her. Yet you cannot help but crave for a more settled person to follow as a guide through the cul-de-sac. Sure, Zach Braff could get annoying and hard to relate to in Scrubs when the story demanded it, but he could always win back his fans for the next episode. Cox is given a script that never seems to allow her do that, always bringing up the same issues (her unstable relationship with Grayson, her need for constant attention from her son), as though she is stuck in a rut.

One new aspect of the story that does rear its head in an interesting turn is Travis’s crush on Laurie. Now that Jules and Grayson seem a tight couple, this is where we will be getting our nervous romance fix from, for the next coming seasons. Travis works perfectly as the guy that we can all relate to: the nervous teen, unlucky in love, drawing in some new spectators (probably the right kind, judging by the wacky humor that some older viewers may simply not get). Some of the episodes focused on his angst can really get the emotion running.

One small irritation: why only 15 episodes? The season feels over, before it really has begun. Sadly, this is a problem we should blame ABC on. This series always feels unstable, drastically changing its format time and time again. The title screen often nervously jokes that it is unsure it shall be on air for much longer. Not taking this as an excuse though, Cougar Town never fails to bring the laughs, always aiming for 100 percent. Three seasons and not a bad episode. Good going, in my books.

Final verdict: The best season yet, albeit devastatingly shorter. More people need to start tuning into this show.