The Meanings Behind the 12 Pubs in The World’s End

The final part of Edgar Wright’s fantastic Cornetto trilogy saw the protagonists try and get through an alien invasion and finish their pub crawl at the same time. The Golden Mile featured twelve pubs and each one was named after something that happened in that specific bar. I thought I would browse online as well as provide my own thoughts, in order to try and decipher the meanings behind these twelve pub names. There will be spoilers below.

This one speaks for itself. It is the first bar on the list and the initial checkpoint, before heading onto the Golden Mile. There is also the meaning that was given during the actual film, being that the pub was initially a post office, before being rebranded into a pub. I am willing to bet it is the first meaning though, as the second one, being actually described by Simon Pegg, is a tad too literal for the clever double-meanings of Edgar Wright.

As the gang enter the second bar, there is a joke about the ‘starbucks’ chain, where every pub looks the same these days. This is where the term ‘Old Familiar’ comes in. It looks identical to the First Post, resulting in ‘déjà vu’. There is also the secondary meaning in the fact that both Gary King and Steven have some old feelings rekindled, when it comes to meeting up with Sam. Steven falls back in love with her, as he did as a kid, and Gary King wants to re-enact their one-night stand in the disabled toilets.

We don’t even see much of this one, as Gary King turns out to be barred, due to his drunken behaviour as a child. I guess this makes Gary King the famous cock who was barred for life. 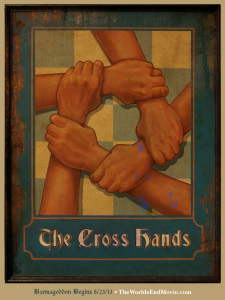 This is where things get a bit harder to read. Real definitions are easier to get from the actual pub sign, where the hands are crossing each other. There is a sense of teamwork in the picture and in a way, this is the first pub where the heroes actually learn to fight together. The entire fight shows them helping each other out and saving their friends from certain doom. The only other explanation I have found is the idea that the robots try to take their DNA with their hands.

Again this is one of the pub that doesn’t get a lot of screen time, so it is hard to read too much into it. The idea of it is that, in order to avoid suspicion, the friends pretend they are enjoying the Golden Mile. Therefore they are acting like ‘good companions’ and continuing on with their journey. I have found no other theories.

This is the bar, where we learn a bit about the robots. Gary King interrogates his old drug dealer friend and learns that the robots are enslaving us, or turning us into trusty servants. Everyone seems happy to do what the robots want in order to have an easier life. It is also important to remember that this is where O-Man is killed off, when he goes to the pub. Therefore, he could be the trusty servant that is mentioned, as he is now one of the robots, acting like the faithful friend, leading them on with the Golden Mile.

This one is easy and I figured it out there and then. The Two-Headed Dog is referring to the battle with the twins. They fight and interact with Sam together, almost coming across as one being. It is good that there are some obvious ones thrown in, as it inspires the viewer to think about the other ones.

This pub is more of a club and where we meet the Marmalade sandwich, the elusive two blondes and a redhead that the friends remember from their childhood. The girls are depicted as Sirens, a mythological creature not unlike the Mermaid. They lure the heroes in with their beauty, take their DNA and almost become their reckoning.

This one had me stumped for a while, because the best theory I could come up with was the fact that the gang were fighting off a swarm of enemies. During research, I found a better theory. This is the pub where we discover the plot of the robots, thanks to Mr. Shepherd (the man trying to herd the main characters together, if you wanted even more references). The robots want everyone working together at the same level, just like bees. There is also the hierarchy of the bees to consider, where the humans would be the worker bees, the robots would be the soldier bees and then the Network, which we will meet later on in the story, is the Queen Bee. This is a much better theory on the name of this pub.

No one is overly sure on this one, as again, no one is really there for too long. The only concrete theory that I found is the fact that this is where Gary King finally loses his head. He cracks and, even with death at all angles, he is intent to finish the Golden Mile. This is as good a theory as any.

Easy one here. I mentioned it in my actual review of the film. Martin crashes a car through the wall of the bar and saves his friends. This creates a hole in the wall.

And finally we reach the World’s End. And that is exactly what it means. This pub is where the world comes to an end and the Network is defeated, sending humanity back to the dark ages. It is the name of the film and the best example to prove that Edgar Wright is not content with just making a great comedy. He wants to make you think as well.