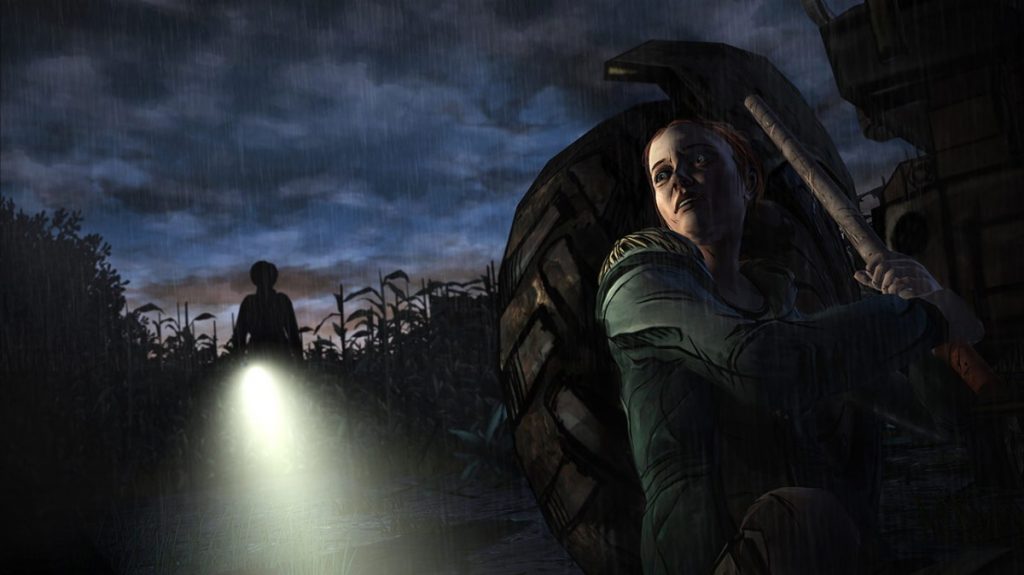 As the review I posted earlier today may have hinted at, I have finally managed to blast my way through the special one-off episode of the Walking Dead Game, 400 Days, to get us ready for season two to hit us in September. But, we have more than enough content to keep us happy with this game. Although it is short, the amount of details crammed into the five mini-stories is incredible. Not only do we have clever little links connecting the five characters, but there are references to the comics and the first season. These Easter eggs might just be me reading too much into what I saw in my play-through, but if you get around to checking them out for yourself, I hope you will agree that there is substantial evidence to prove me right. If anyone has spotted any more cool little tricks then leave a comment. I would love to check them out for myself (even if it is just another excuse to let myself play through the game once more).

When the game opens, we focus on the café where most of the action takes place. As we know, the game focuses on a noticeboard where all of the missing characters are seen. You select a character and then follow their origin story. However, there are some other faces on the notice board that the camera breezes over. Correct me if I am wrong, but I swear that one of them is Dale from the TV show. It’s an oldish guy where the trademark hat that we always see Dale wearing. It would be a nice Easter Egg if I am right, because it would connect the game with the comic books, something that isn’t too clear with this additional DLC.

Just a quick one here, but as Wyatt’s story kicks off, you instantly pass the remnants of the prison bus from Vince’s mission. It looks lifeless, any signs of life long gone. Obviously the prisoner you left behind is dead (possibly walking dead), and could become a neat little Easter Egg in Season Two. Come to think of it – seeing as I doubt Lee is going to be used again – I wonder if the writers will have a Lee walker pop up as an Easter Egg. It would be cool if even the characters didn’t realise the importance of this particular walker, but us, as the gamer, are mind-blown at the revelation.

Carley has become a little bit of a cult figure in the gaming world. She is the potential love interest in the first season, but her character is cruelly killed off, before there is any chance of a romance. This gap in a happy story is devastating and people have given Carley a memorial service that a member of the royal family would be lucky to get. Of course, the moment the writers had a chance to add a Carley reference to the game, they jumped at it.

The reference in question is in the Russell storyline. The keen-eyed gamers would notice that the level opens on the same road that Carley met her gruesome demise. This would be a good enough Easter Egg in itself, but the writers take it one step further. When Russell jumps into the ditch to hide from Nate, he jumps next to a dead body. A familiar dead body that looks like it has been shot in the face. Yes, we get to see Carley (or Doug if you were that one weirdo who saved him instead). It is a heart-breaking moment in the game.

I have also heard on the internet that Kenny also makes an appearance. In the opening sequence, before the noticeboard, you can see the gas station. It is possible to see a small figure run to a RV and jump in, driving off. Personally, I am unconvinced. It is too hard to make out, although I would be welcome to be proven wrong. Kenny is just as loved as Carley when it comes to the first season.

This is one of the game’s secret that is pretty obvious if you played the levels in a different order than suggested. If you began with Russell, you may recognise a surprise appearance from the amusing, yet unpredictable character of Nate. In the Wyatt storyline, with hindsight, the truck chasing after them is quite clearly Nate’s. It has the bright headlights and the same brand. It is quite a cool little connection, showing how layered the game actually is. I am looking forward to a return from the character in the second season. There is quite clearly more to the character that meets the eye.

In the Shel storyline, the group have their own personal Walkers acting as guard dogs, alerting them to any intruders breaking into the gas station. If you have a keen memory – and again have completed the levels in a different order – you will recognise these Walkers as old characters from the other levels: the old couple that were hiding out in the gas stop in the Russell storyline. The old woman will definitely be there, as we see her with a wound. However, it is possible to save the old man – or at the very least shade his death in doubt. If so, rather than the old man, there will be a police officer there. I am not sure, but I think it was the cop who abandoned Vince in the first part of the game. Others have said that this cop is also the guy that Eddie runs over in the Wyatt storyline. Maybe we are both right and this is the full storyline of that cop’s life as a survivor in the Walker apocalypse.

1 – CHASE THROUGH THE CORNFIELDS

This is the best Easter egg in my book, as it throws a different spin on two of the levels. In the Bonnie storyline, you are running away from some people in a cornfield that Dee has stolen from. At first, they appear to be nameless thugs, like most of the bandits that you encounter in any form of Walking Dead fiction. However, with a bit of digging you discover that you are actually being hunted by Shel and her group.

Surprised? Well, I have evidence to back my theory up. When, in the Shel story, you are doing the inventory, Shel comments that a torch was lost in the battle in the cornfield, when they were robbed. Dee managed to get a torch from one of the chasers in that level. Once you have a suspicion, play through the Bonnie level again and it becomes more and more apparent. For one, Stephanie’s and Clive’s voices are very clear and recognisable. Then we see the silhouettes of Stephanie and, much more clearly, Roman. It adds more emotions to the storyline, as you realise that Bonnie could be argued to be a villain in her own storyline. It also makes you realise how harsh the world has turned even the warm-hearted Shel. I hope Season 2 has even more references thrown into the mix, because I love finding them and they really benefit the story.